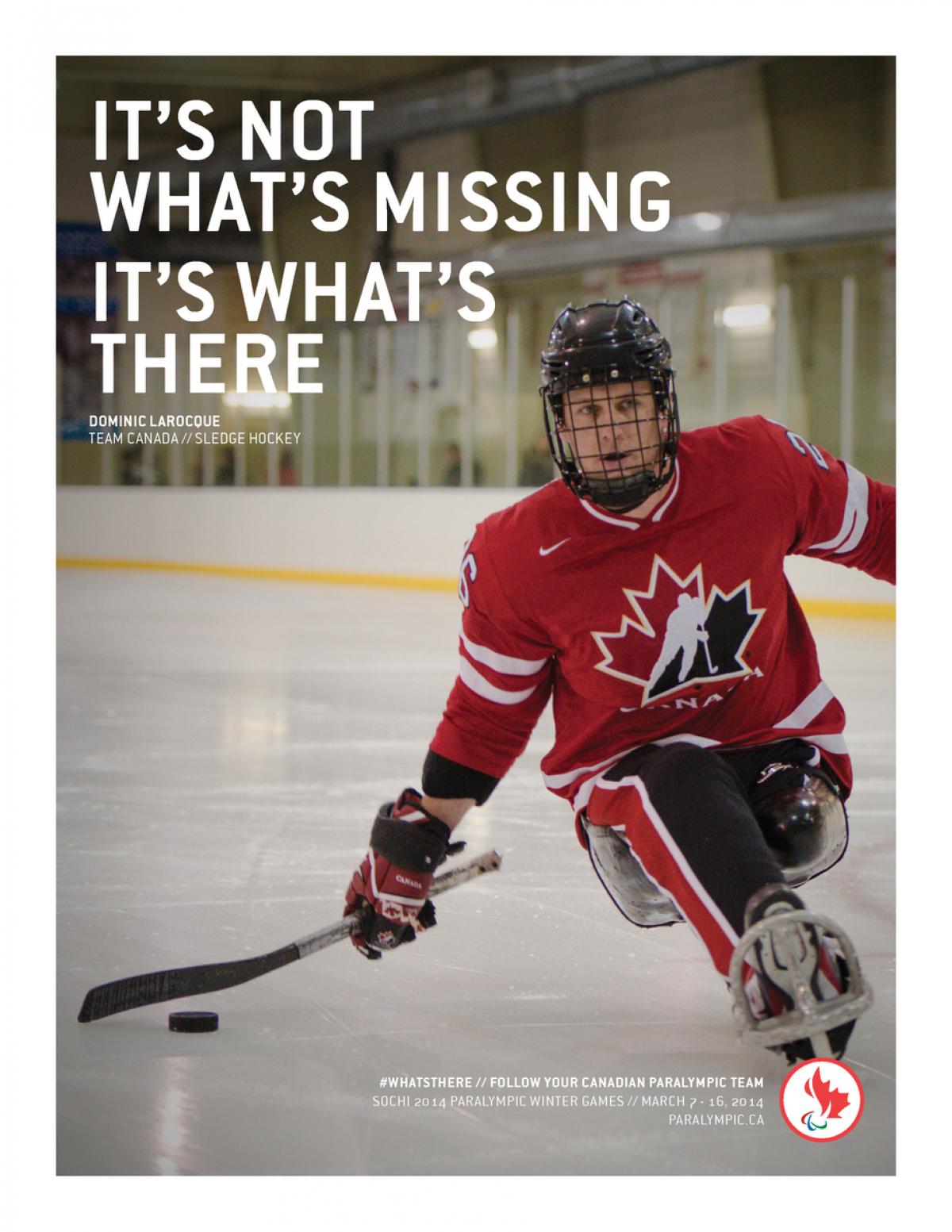 With a goal of placing in the top three nations in the gold medal count, Canada will send approximately 50 athletes to compete at the Games. Nominations to the team are ongoing. The full team will officially be unveiled at the end of February.

With the Sochi 2014 Paralympic Winter Games on the horizon, Canadian sports fans are being treated to a provocative new Paralympic marketing campaign that compels viewers to look past the impairments of Paralympic athletes, and instead fathom their complete, elite, world-class abilities.

It's not what's missing, it's what's there.

The TV campaign is conceived and produced by BBDO Toronto. The full video can be viewed here.

"This campaign is an awesome opportunity to increase awareness and demonstrate what we as Paralympic athletes are capable of," said cross-country skier and biathlete Arendz.

"I'm so proud to be a part of this project and I hope it will inspire Canadians to follow Team Canada and cheer for us when we compete in Sochi next month."

The Sochi 2014 Paralympic Winter Games will be held from 7-17 March and Canada will compete in all six sports on the programme: snowboard, alpine skiing, cross-country skiing, biathlon, ice sledge hockey and wheelchair curling.

The campaign also features print and digital ads that features household names and up and coming athletes. Sample print ads can be downloaded at paralympic.ca/multimedia.

"When we look at Paralympic athletes, we can make the mistake of focusing on their disabilities, instead of their extraordinary abilities," said Simon Craig and JP Gravina, Associate Creative Directors, BBDO Toronto. "This campaign forces the viewer to see all the amazing things that make these Paralympic athletes great. To catch them in the midst of competition is an awe-inspiring experience by any definition."

The campaign shows the athletes' strength in a unique way. Using a letterbox effect, the video focuses on only a select portion of each athlete at first. It only reveals their full identities at the very end of each scene, proof to the viewer that a Paralympian can be every bit as impactful in performance as an able-bodied athlete.

The line, "It's not what's missing, it's what's there" describes the need to look past physical differences to concentrate instead on the hard work and raw talent that these dedicated athletes bring to their sport.

"The goal is to get Canadians on the edge of their seats and excited about the upcoming Paralympic Games," said Martin Richard, Executive Director, Communications and Marketing for the Canadian Paralympic Committee.

"Seeing these athletes compete at the level they do will get you hooked and we are thrilled to bring back the Paralympic excitement to Canadians with unprecedented coverage through our media consortium partners."

With a goal of placing in the top three nations in the gold medal count, Canada will send approximately 50 athletes to compete at the Games. Nominations to the team are ongoing. The full team will officially be unveiled at the end of February.