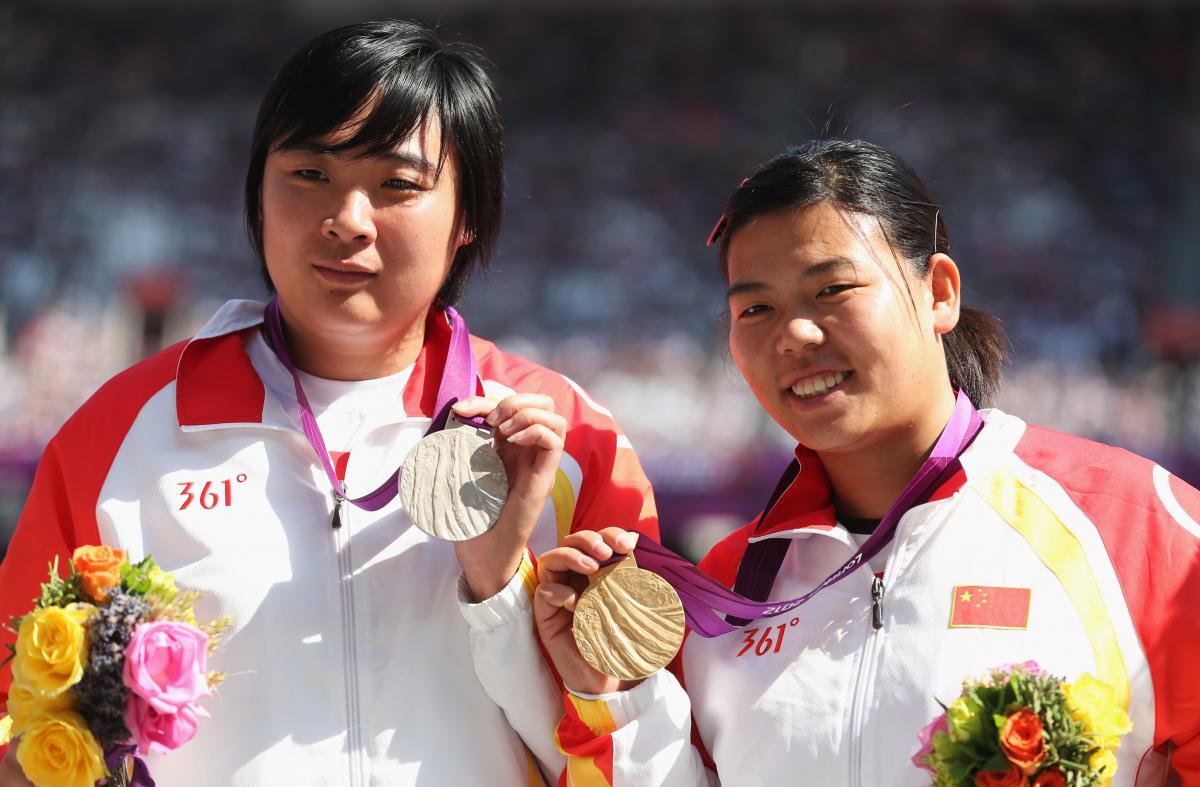 "I felt that the atmosphere here (in London) is better than 2008 and I also had more experience, so I did better.”

China showed why they are leading in the athletics medals table at London 2012 on Tuesday morning (4 September), as they took gold and silver in the women’s shot put F37.

Na Mi reached a staggering 12.20m to reset her world and Paralympic record in the event.

"In practice I have never thrown that far. I always throw around 11.70 to .80. I really didn't expect that I could throw that far in my first throw - I was really surprised as well."

"I felt that the atmosphere here (in London) is better than 2008 and I also had more experience, so I did better,” Mi said.

Ukraine’s Ruslan Katyshev secured the gold medal in the men’s long jump F11 with his first attempt that reached an impressive 6.46m. He narrowly beat current world record holder Elexis Gillette of USA who took second place and the silver medal in front of bronze medallist Duan Li of China.

Russia’s Alexey Ashapatov furthered the Paralympic record he set in Beijing with a distance of 16.20 (989 points) in the men’s shot put F57/58 to receive the gold medal. Janusz Rokicki of Poland claimed silver with South Africa’s Michael Louwrens taking bronze.

Gold in the men’s javelin throw F52/53 went to Alphanso Cunningham of Jamaica with a 21.84m distance ahead of silver medallist Abdolreza of Iran and third placed Mauro Maximo de Jesus of Mexico.

Recent gold medallists from the T54 classification went head-to-head in the women’s 800m T54 semi-finals, targeting their next gold medal of the London 2012 Paralympic Games.

US track sensation and 400m T54 gold medallist Tatyana McFadden and 5,000m T54 champion Edith Wolf of Switzerland were back in the Olympic Stadium, this time focusing on their next golden opportunity in the 800m. McFadden stormed across the line as the fastest qualifier with a time of 1:47.66 with Switzerland’s Edith Wolf finishing first in her semi-final and third fastest overall, setting up a thrilling final.

"I stayed relaxed and didn't feel tired. I used the energy from (Monday) to get through the race,” McFadden said.

“It is a really tough field with competitors like Wolf, but I hope I can win. Whatever happens I will give 100 per cent."

A dramatic finish to the men’s 800m T53 second heat saw Jesus Aguilar of Venezuela crash across the line as he tried to overtake his opponent Pierre Fairbank of France and narrowly missed out on the guaranteed qualification of third place in the heat.

His time was not enough to take him through as one of the fastest losers.

Qualifying with the fastest time from the first heat of the 800m was Australia’s Richard Colman, just ahead of Korea’s Byunghoon Yoo.

There was heartache for Tresor Gauthier Makunda of France as he was disqualified for a false start in the semi-final of the men’s 200m T11, leaving Brazilian’s Daniel Silva, Felipe Gomes, Lucas Prado and Jose Sayovo Armando of Angola to progress to the final.

Brazil also dominated the women’s 100m T11 heats with all three of the Brazilian contenders finishing at the front of their races.

World-record holder Terezinha Guilhermina qualified with the fastest time and set a new Paralympic record of 12.23 in the process. She goes in to the final as favourite ahead of her teammates Jerusa Geber Santos and Jhulia Santos along with Chinese opponent Juntingxian Jia.

Setting a new world record in the heats of the men’s 200m T34, Walid Ktila of Tunisia ran the distance in 27.98 to lower the record under the 28 seconds mark. The previous world-record holder in the event, Mohamed Hammadi of United Arab Emirates qualified with the third fastest time.

Cuba’s Yunidis Castillo broke her own world record, set at the Beijing 2008 Paralympic Games, in the women’s 100m T46 heats with an incredibly quick time of 11.95.

Everyone that qualified from the men’s 400m T12 semi-finals put in personal best performances in a desperate attempt to reach the final. Mahmoud Khaldi of Tunisia took the top spot after the second heat with the fastest time of 49.02, closely followed by Hilton Langenhoven of South Africa.