China’s Yao shot to the top of the podium

Chinese athletes dominated the jumping and throwing events of this morning, collecting gold and silver medals in women’s shot put F42/44 and the gold in the men’s long jump F46. 03 Sep 2012
Imagen 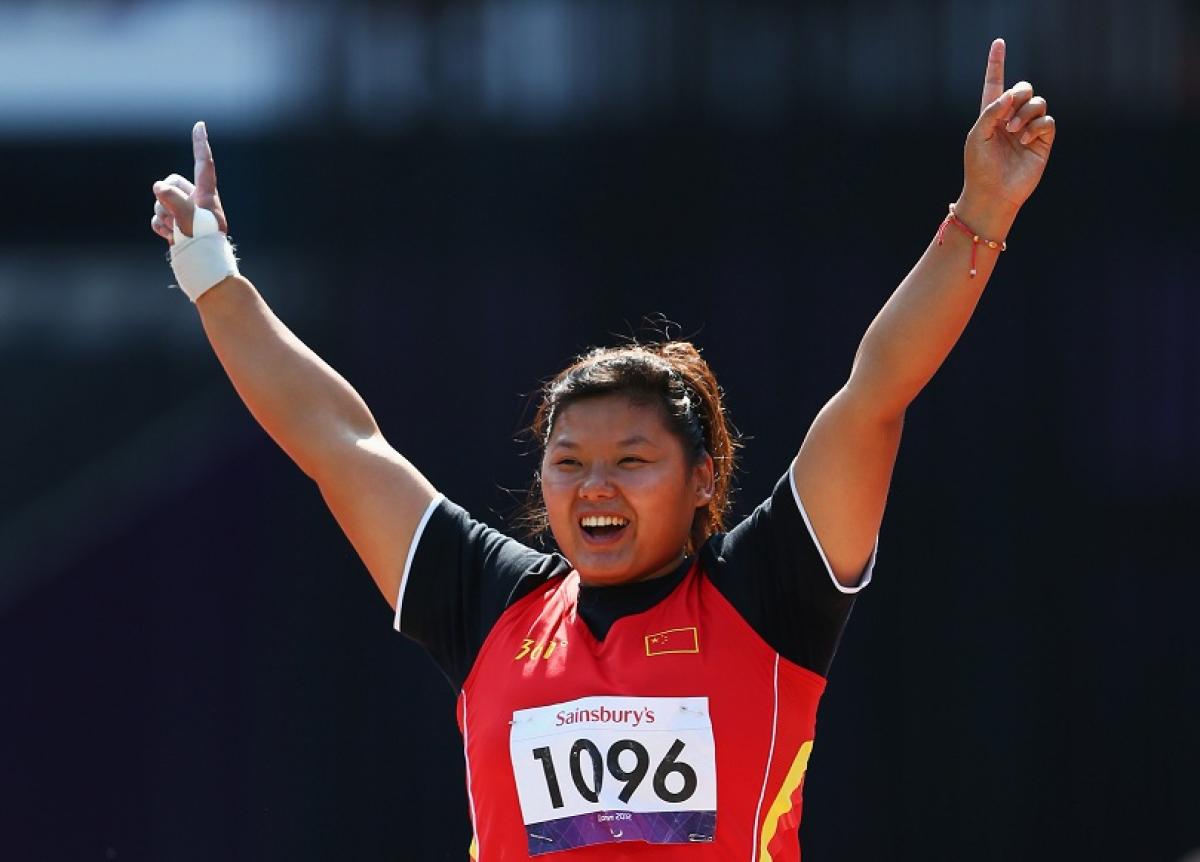 Juan Yao from China won the gold medal in the women’s shot put F42/44 in the London 2012 Paralympic Games.

"I'm very proud to win this gold for China and to show the true spirit of disability sport to the world. I feel very happy and I love the crowd in London.”

Juan Yao of China broke the 13m barrier in the women’s shot put F42/44 final with a world record-breaking distance of 13.05m to collect the gold medal.

Speaking after the final, Yao said: "I feel great. This is my fourth Paralympics. I'm very proud to win this gold for China and to show the true spirit of disability sport to the world. I feel very happy and I love the crowd in London.”

In the men’s shot put F11/12 final, Andrii Holvets managed a personal best distance of 16.25m to secure the gold medal, narrowly missing out on setting a new world record in the F12 classification. Russia’s Vladimir Andryushchenko was the silver medallist and Russell Short of Australia took bronze.

Defending champion Arnaud Assoumani of France had to settle for a silver medal in the men’s long jump F46 final as China’s Fuliang Liu cleared a new Asian record to finish in the top spot.

Sebastian Ernst Klaus Dietz of Germany won his first Paralympic gold medal in the men’s discus throw F35/36 with his third round distance of 38.54m. Claiming the silver medal was Oleksii Pashkov of Ukraine and Wenbo Wang, the Beijing 2008 gold medallist, took bronze.

You could have mistaken the first heat of the men’s 800m T12 event as a final judging by the cheers from the crowd that carried British athlete David Devine across the line in first place and fastest qualifier from the heats.

Commenting on the influence of the crowd, Devine said: "With 50m left I thought someone was racing past me as it was so loud and I tightened up a bit because of it. It makes it so much easier when you've got 80,000 screaming at you, so more for the final please."

Devine is joined by Abderrahim Zhiou of Tunisia, Cuba’s Lazaro Rashid and Egor Sharov of Russia.

The newly crowned 5000m Paralympic champion, David Weir of Great Britain, was back on the track for the men’s 1500m T54 where he qualified in the first heat just behind world record holder Marcel Hug of Switzerland and Paralympic record holder Prawat Wahoram from Thailand. Paralympic veteran Kurt Fearnley of Australia finished at the front of his heat but the time placed him 15th fastest after the three heats.

Qualifying clear from the pack in the first heat of the men’s 400m T52 was USA’s Raymond Martin with a marginally quicker time (1:00.33) than world record holder and winner of the second heat Tomoya Ito.

World record holder Mickey Bushell of Great Britain qualified as the fastest athlete in the men’s 100m T53 heats and progresses to the final ahead of Brent Lakatos of Canada.

Assia El Hannouni of France demonstrated why she is the world record holder in the women’s 400m T12 semi-final, qualifying for the final with the fastest time of 55.50.

After an initial false start in the second semi-final, disqualifying Daqing Zhu of China, Oxana Boturchuk recorded a personal best time of 55.93 to secure her place in the final as the next fastest qualifier.

Tatyana McFadden made her London 2012 intentions clear with her first appearance on the track in the women’s 400m T54 heats. The American clocked a new personal best time of 53.95 to head straight into the final.

Russia’s Fedor Trikolich clinched the winning position in his heat of the men’s 100m T12 race to head into the final as the quickest qualifier. He is joined by China’s Yansong Li, Poland’s Mateusz Michalski and Maximiliano Rodriguez of Spain.