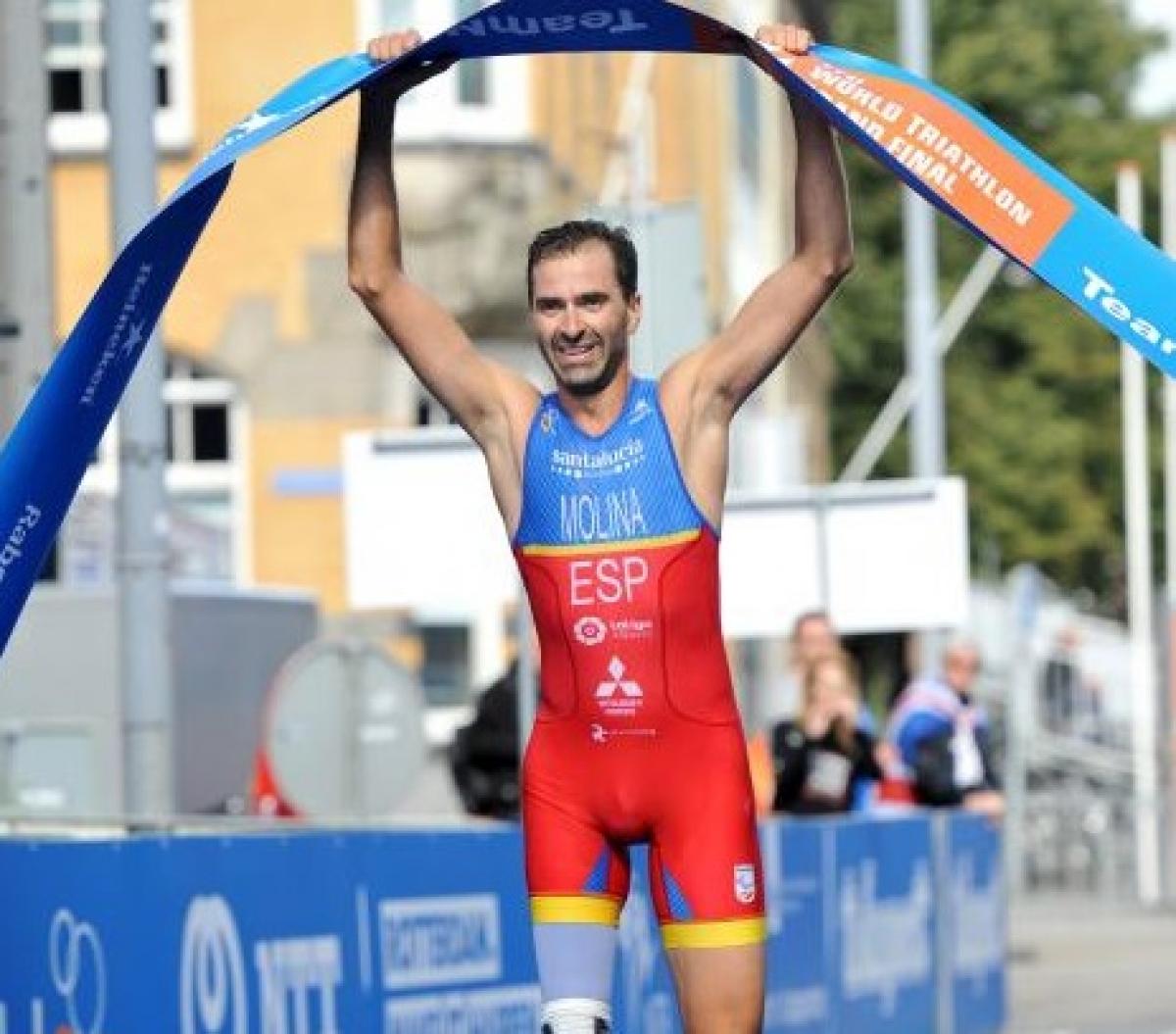 Spain’s Daniel Molina is eager to pick up where he left off as he begins his season at the ITU (International Triathlon Union) Para Triathlon World Cup in Aguilas, Spain, on Sunday (6 May).

The 43-year-old won all four of the Para triathlon events he entered in 2017, including the PTS3 world title at last September’s World Championships in Rotterdam, the Netherlands.

“Last year was the best year of my sporting career,” Molina said. “I won every race I competed in, which is not easy. I think I improved a lot last year and I certainly learnt a lot about myself. I have trained a lot during the winter, focusing on improving different aspects.”

The PTS3 world title completes Molina’s remarkable rise in the sport since taking up Para triathlon in 2012 after a friend convinced him to compete in his first event.

Molina has come a long way since then, and, while being the athlete to beat can often add additional pressure, being world champion is an accolade the Spanish Para triathlete is relishing.

“I am actually more relaxed [being world champion],” Molina said. “Becoming world champion was my obsession, so to now hold the world title means I don’t have to chase after it anymore, and I can just enjoy it.”

Now Molina has got the taste of glory, he is eager to continue where he left off.

Defending his European and world titles are his two main targets for 2018, and this weekend’s Aguilas World Cup represents the first opportunity for Molina to test himself after a busy winter of training.

“This weekend will be my first test of the season and the truth is heading into your first race it is always difficult to know how you are going to perform,” Molina said. “I hope to have a good race and win in Aguilas, although I am still not in my best form.”

Like many Para triathletes, Molina has a discipline he favours, and it is perhaps no surprise it is swimming.

Molina was a semi-finalist in the 100m backstroke at the 2004 Paralympic Games in Athens, and a multiple-national champion in the pool.

“I think that in short distance being a good swimmer is key to winning races,” Molina said. “I usually get a lot of advantage during the swim and then I am able to maintain it on the bike and run.”

The other PTS3 competitors in Aguilas will be aiming to stay with Molina for as long as they can on the swim to reduce the deficit heading into transition one. Molina’s compatriot Joaquin Carrasco will be the world champion’s most likely challenger after becoming a regular on the international podium last year.

In the men’s PTWC class, Germany’s Benjamin Lenatz will be aiming to improve on his third-place from the opening World Cup of the season in Devonport, Australia. But France’s Alexandre Paviza and Ahmed Andaloussi will both provide stern competition, with Andaloussi winning both the Besancon and Altafulla World Cups last year.

Spain’s Eva María Moral Pedrero will start as the favourite in the women’s equivalent after winning bronze at last year’s World Championships, while the Spanish crowds will be hoping for home victories in both the men’s PTS4 and PTS5 events.

Alejandro Sánchez Palomero (PTS4) and Jairo Ruiz Lopez (PTS5) have both been regulars on the podiums in their respective classes over the last few years. Héctor Catalá Laparra and Susana Rodriguez will also be looking to start their season with victories in the PTVI events.