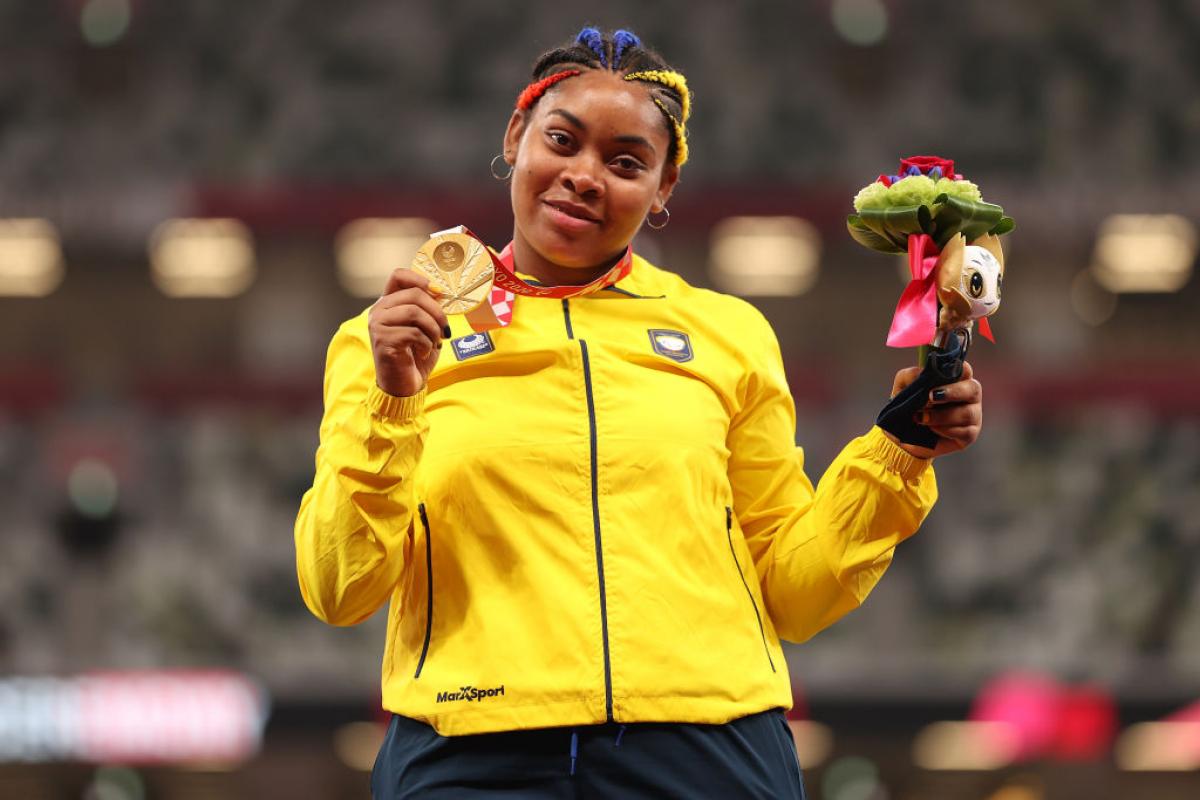 Great Britain went from shocking home favourites Japan to stunning the entire wheelchair rugby tournament when they beat the USA for gold on Day 5 (29 August) of the Tokyo 2020 Paralympic Games, signifying a shift in the event's powerhouses.

Norway’s Salum Ageze Kashafali – a civil war refugee from the Dominican Republic of Congo – took the 100m T12 in style.

There was also plenty for Brazil to celebrate on Sunday, including their first powerlifting Paralympic champion in Mariana D’Andrea and while Ecuador did not win as many medals, the one they did claim from shot putter Poleth Mendes was historic.

And Para triathlon wrapped up with a thrilling sprint finish in the women’s PTWC category.

Here are the Day 5 highlights:

Great Britain became the first European nation to win gold in wheelchair rugby at the Paralympic Games with a 54-49 win over the USA, who were hoping to upgrade their silver from Rio 2016.

The last time Great Britain played for a Paralympic medal was Beijing 2008, where they finished fourth. But after showing their strength in the semi-finals against Japan, then taking control to beat world No. 2 USA, the Brits showed they are the real deal.

In the bronze-medal match, Japan’s tears from their semi-final loss turned into tears of joy with a strong performance to repeat their result from Rio 2016. Australia – who were going for their third straight gold – surprisingly left Tokyo 2020 without a medal.

Please allow us to bless the timeline with some more Paralympic Champions #ImpossibleToIgnore #Murderball 🥇 pic.twitter.com/WMICcHYuSy

D’Andrea captured her country’s first Paralympic gold medal in powerlifting. The Brazilian pushed 137kg in her third lift, and China’s Xu Lili tried to better that in her final try – with D’Andrea watching on anxiously. But when Xu failed, D’Andrea celebrated not only the women’s up to 73kg title, but history.

The final day of judo was a story of redemption for Maldonado.

The Rio 2016 silver medallist returned from the disappointment of her home Paralympics to claim a much coveted title. Taking on Georgia’s Ina Kaldani, who had beaten Mexican Paralympic title-holder Lenia Ruvalcaba on her way to the final, Maldonado’s victory rarely looked in doubt.

She got a waza-ari on the board but continued to attack. The Brazilian was unlucky to miss out on more points as Kaldani floundered. When the clock ticked over to 0:00 Maldonado let out a huge scream and embraced her coach after being officially awarded the win.

Dos Santos showed off his dancing and swimming skills at the Tokyo Aquatics Centre, when the 19-year-old Paralympic debutant won the men’s 200m freestyle S2 to couple with his 100m backstroke silver from the other day. Gomes added another title in the pool, taking the women’s 50m freestyle S13 for her first Paralympic title.

Kendall Gretsch can now claim to be the queen on land, water and snow, as the US Para athlete captured the women’s PTWC gold in exhilarating fashion. Gretsch showcased her Nordic skiing arms – the ones that helped her claim two gold medals from PyeongChang 2018 – to overtake Australia’s Lauren Parker at the finish line to win by one second on the last day of Para triathlon action. It was still an incredible display of excellence from Parker, who came back from an injury in 2017 that stopped her professional triathlon and Ironman career, to become a Para triathlon world champion and now Paralympic silver medallist.

GOLD AT LAST FOR SKARSTEIN

Norway’s dual-sport sensation Birgit Skarstein finally claimed the Paralympic gold she has been training for. A Nordic skier who also competed at the PyeongChang 2018 and Sochi 2014 Paralympic Winter Games, she found herself on the top of a Paralympic podium, winning the women’s single sculls (PR1W1x) in dominating fashion.

Norway could also be heard celebrating at the Olympic Stadium, where Salum Ageze Kashafali broke his own world record to complete his extraordinary journey from civil war refugee to champion.

The sprinter, who fled the Democratic Republic of Congo with his family as a child to find safe haven in Norway, clocked 10.43 seconds to win the 100m T12 title.

There was more incredible feats at the Olympic Stadium when Ecuador’s Poleth Mendes won the country’s first Paralympic gold medal in world-record fashion. The 25-year-old threw 14.39m in the women’s shot put F20.

In table tennis, Germany’s Valentin Baus avenged his Rio straight-games loss to Cao Ningning by defeating his Chinese rival in an absorbing five games to clinch gold in the men’s singles class 5 final. Hungary’s Peter Palos also survived a five-set battle with Sam von Einem to win the men’s singles class 11, while China won five of the gold medals available on the day. 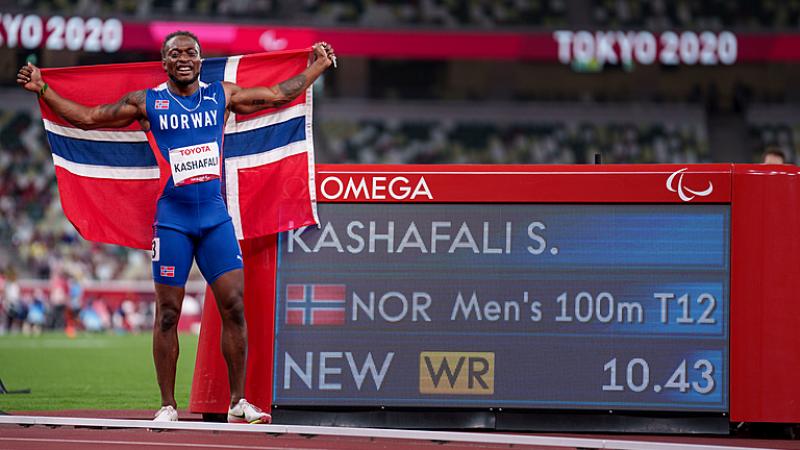 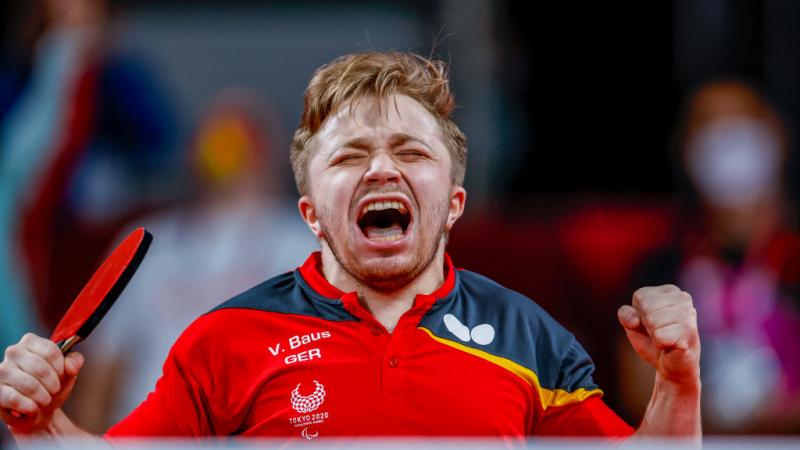 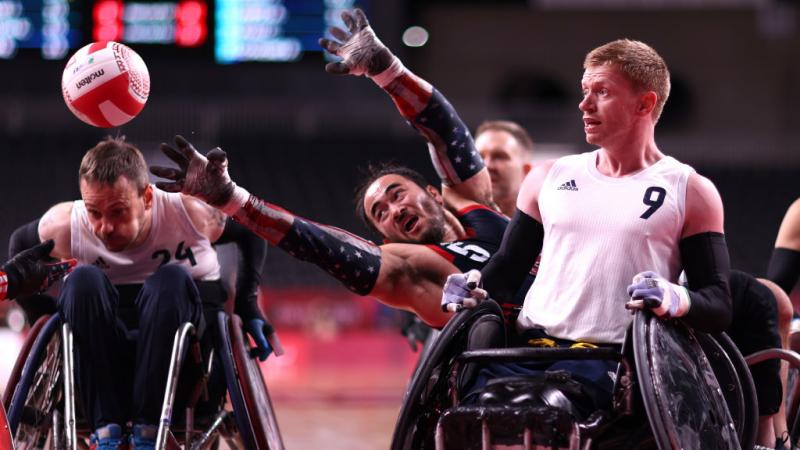