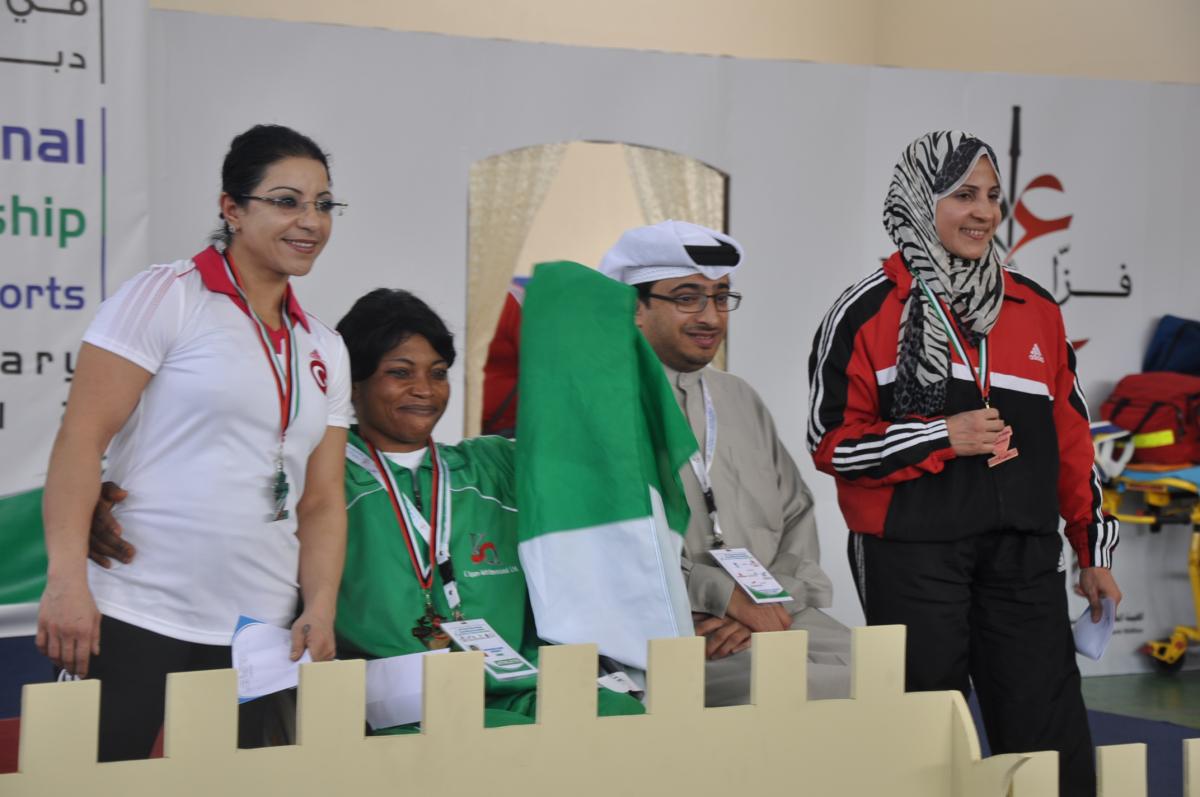 The 4th Fazza International Powerlifting Competition in Dubai, United Arab Emirates from 21-27 February was a two-horse race between Nigeria and Egypt. Egypt topped the medals table with nine gold, five silver and one bronze medal, and Nigeria came a close second with six gold, seven silver and three bronze medals.

The competition was the final opportunity for athletes to qualify for the London 2012 Paralympic Games, where China, who did not compete in Dubai, is the favourite to top the medals table.

In the women’s up to 40kg category, Turkey’s Nazmiye Muslu took gold with a lift of 106kg – over two and a half times her own body weight. Syria’s Noura Baddour took silver with a 90kg lift and Ukraine’s Maryna Kopiika came third lifting 72kg.

In the women’s up to 44kg category, Nigeria’s Oduenyi Nwokorie won gold with a lift of 107kg. Close behind her with a 106kg-lift was Turkey’s Cigdem Dede. Bronze went to Egypt’s Beijing 2008 bronze medallist Zeinab Oteify who lifted 100kg.

Nigeria’s Esther Oyema took yet another gold for her country in in the women’s up to 48kg category, lifting 130kg. Silver went to Turkey’s Yasemin Ceylan (102kg) and bronze to Armenia’s Greta Vardanyan (75kg).

In the women’s up to 52kg, Ukraine’s Tetyana Shyrokolava picked up gold, lifting 103kg on her third attempt. Great Britain’s Natalie Blake picked up silver with a 94kg lift and close behind her was Ukraine’s Olena Voitko (93kg).

Egypt’s Paralympic gold-medallist Fatma Omar showed what stuff she was made of in the women’s up to 56kg event, to take gold with a lift of 125kg. Nigeria’s Lucy Ejike (115kg) took silver. Ejike won gold in the 48kg category at the Beijing 2008 Paralympics, but has since moved up to the 56kg event. Turkey’s Ozlem Becerikli (114kg) was close behind in third place.

In the women’s up to 60kg, Egypt’s Paralympic silver-medallist Amal Mahmoud lifted 120kg on her third lift to take gold. Russia’s Kheda Berieva managed 102kg, putting her in second place and close behind in third was Nigeria’s Eniola Falodun with 101kg.

France’s Souhad Ghazouani won her country’s only medal of the event in the women’s up to 67.5kg category, taking gold with a 147kg lift. Nigeria’s Chinwendu Oriemezie (130kg) won silver and Thailand’s Arawan Bootpo (111kg) bronze.

In the women’s up to 75kg, Nigeria’s Folashade Oluwafemiayo dominated with a lift of 142kg. Coming second was Brazil’s Josilene Ferreira (105kg) and Russia’s Olga Kazankevich (100kg) was third.

In the women’s over 82.5kg, Nigeria’s Paralympic silver-medallist Grace Ebere Anozie took gold with a best lift of 168kg.

In the men’s up to 48kg category, Nigeria’s Yakubu Adesokan lifted an incredible 177kg – over three and a half times his own body weight - to take gold. Egypt’s Taha Abdelmagid came second, lifting 164kg and Russia’s Vladimir Balynets won bronze with a 160kg-lift.

The upper-weight categories belonged to Egypt, bringing the team gold in all but the 100Kg+ events.

Ibrahim’s teammate, Abdelkalik Abdelkalik, stormed ahead into first place in the men’s up to 75kg with a lift of 216kg. Poland’s Wawrzyniec Latus took his country’s only medal of the event, winning silver with 177kg. Brazil’s Evanio Da Silva (174kg) took bronze.

Iraq’s Faris Al-Ajeeli broke the Egyptian domination in the men’s over 100kg category, taking gold with a best lift of 260kg.

Egypt’s Mohamed Sabet (235kg) came second and Azerbaijan’s Maharram Aliyev won his country’s only medal of the competition with a bronze-medal lift of 229kg.

A number of world records were broken during the event and are awaiting ratification. 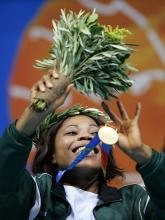 Lucy Ogechukwu Ejike of Nigeria smiles with her gold medal after breaking the Women's 44kg category world record by lifting 127.5 kg (approximately 311 pounds) in Powerlifting at the Beijing 2008 Paralympic Games