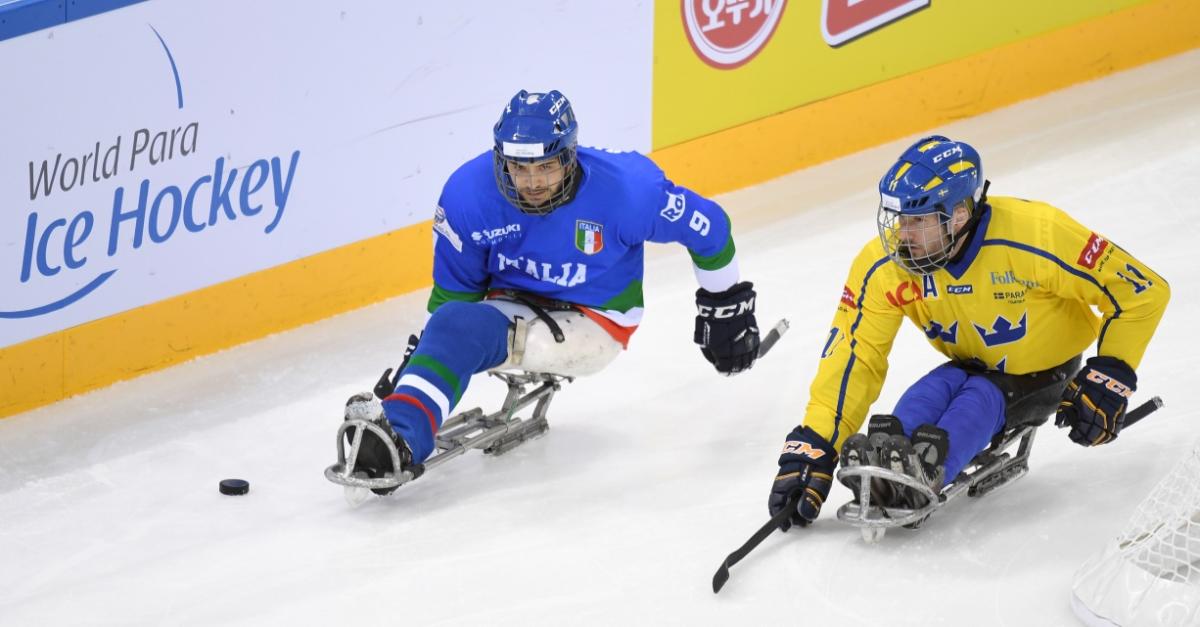 Italy picked up the first three points of the 2017 World Para Ice Hockey Championships A-Pool in Gangneung, South Korea, on Wednesday (12 April) with a crucial 2-1 victory over Sweden after taking the lead early in the game courtesy of Paralympian Sandro Kalegaris.

Competing in his third season for Italy, Kalegaris became the first Para ice hockey player to score on the same ice that will be used for the PyeongChang 2018 Paralympic tournament. He found the net 5:21 into the first period off a pass from his mentor, Florian Planker.

"The ice and venue here are great, and we're very impressed with what's been built here,” Kalegaris said. “It felt very good to be the first Para ice hockey player to score a goal on the ice here. I had a very good early chance I missed on, but my second chance went in.

“We are very happy to get the first three points in the standings here and are looking forward to more matches.”

Just over halfway through the second stanza of that game, 19-year-old Christoph Deapoli surged for a score to put Italy up by two. Sweden’s 23-year-old Per Kasperi responded 59 seconds later with a score of his own, with Marcus Holm being credited with the assist.

Italy kept Sweden out of the crease for the remainder of the game, as Gabriele Araudo finished the day with eight saves. Sweden’s Ulf Nilsson fended off the puck 17 times in a solid effort.

In a rematch of the Sochi 2014 Paralympic bronze-medal game, Canada wasted no time in defeating Norway again, 9-0, as the reigning world silver medallists notched six scores in the opening frame alone.

“It was a lot of fun out there,” Westlake said. “This is a beautiful spot. The ice is fantastic. The dressing room was great. It was fun to go out there and play our first game where the Paralympics will be.

“I know a lot of the guys were fired up about that. That’s just one down, and we have a lot of games to go, but if every game can go like that then we’ll be good.”

McGregor opened the game’s barrage of scoring just 30 seconds into the game, with Kevin Sorley, Ben Delaney, Adam Dixon, Liam Hickey and Westlake all finding the net to put Canada up 6-0 at the first intermission.

Three-time world champion Billy Bridges capitalised on a loose puck situation to provide Canada another tally before Westlake and McGregor took it to the net with another score each in the third, both assisted by Hickey.

The final game of the day was an absolute thriller; host nation South Korea escaped with a 2-1 victory over Germany, as speedy star forward Seung-Hwan Jung played the role of the hero.

Following a scoreless first period, Jongkyung Lee, who captained South Korea to a silver medal at the 2012 World Championships, made the host nation’s fans erupt 3:20 into the second frame when he lifted the puck up and under the bar for a score off a pass from Jung.

Germany’s Robert Pabst levelled the score with a shot to the top of the net on the power play early in the third, making for a high-pressure final few minutes to the game.

Jung, the star of South Korea’s Para ice hockey programme and a PyeongChang 2018 Ambassador, scored the winning goal with just 3:17 remaining in the contest.

“I feel really great and want to keep this emotion, momentum and motivation up for the whole event,” Jung said, smiling from ear to ear after skating off the ice. “Our goal is to get the bronze medal in this tournament.”

The 2017 World Para Ice Hockey Championships are taking place from 11-20 April in Gangneung, South Korea, at the ice sports venue city for the PyeongChang 2018 Paralympic Winter Games. The tournament also serves as the Paralympic Test Event, with the top five finishers automatically qualifying for PyeongChang 2018.

All games from the 2017 World Para Ice Hockey Championships are being streamed live at www.Gangneung2017.com, and live statistics and results are available at www.paralympic.org/gangneung-2107/schedule-results.