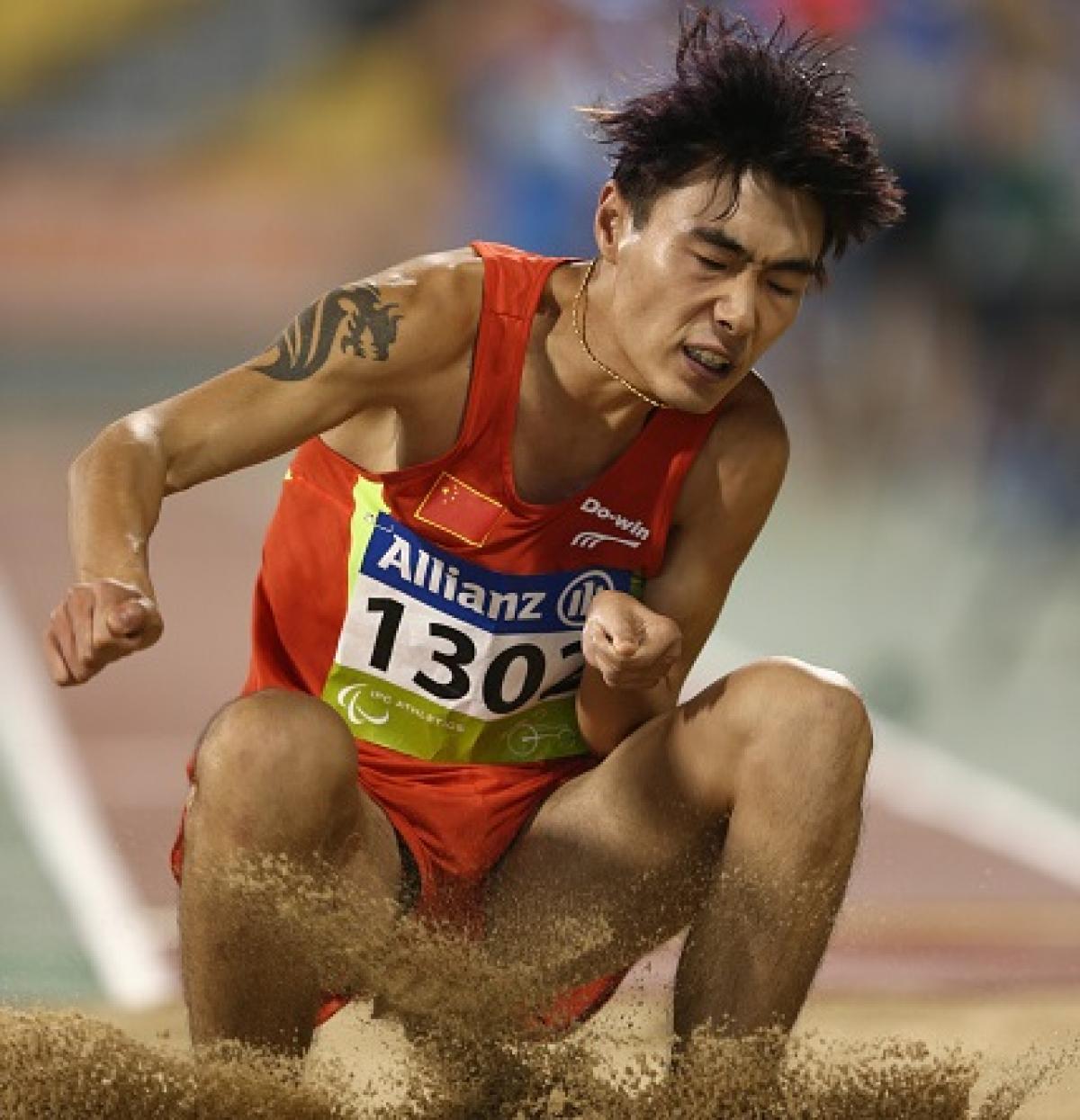 China’s Guangxu Shang smashed his own world record twice on his way to gold in a gripping men’s long jump T37 final on Tuesday (13 September) that saw the world record fall three times.

Shang, 21, set a new world record with his opening leap at last year’s World Championships and he did it again at the Olympic Stadium, adding five centimetres on to his previous best with a jump of 6.52m in the first round.

Brazil’s Mateus Evangelista Cardoso immediately followed up with 6.53m in the second round but Shang responded with his next jump, leaping an outstanding 6.77m, which proved enough to take the win.

Cardoso held on to silver as Pakistan’s Haider (6.28m) – the only Para athlete from his country competing at Rio 2016 – won the bronze.

Hu, another gold medallist from last year’s World Championships, looked in terrific form as he started strongly and raced in to the lead.

The Australian, who was aiming for a hat-trick of Paralympic 100m titles in Rio, having won at Beijing 2008 and London 2012, proved no match for Hu this time as he finished second in 10.98, announcing afterwards that he would “step away from the track at this point” and retire from the sport. Brazilian favourite Edson Pinheiro (11.26) won bronze.

Great Britain’s Georgie Hermitage raced to her second gold medal of the Rio Games, breaking her own world record as she won the 400m T37 (1:00.53) in the Rio sunshine.

The 27-year-old smashed the 100m T37 on Friday (9 September) and she was in blistering form once more as she knocked 0.1 seconds off the mark she set at June’s European Championships.

“I did what I needed to do. The heat is a good thing for my hemiplegia because it loosens the muscles but I still have to cope with the humidity,” said Hermitage.

“I was very nervous for this one because it means everything and hopefully there is more in the tank for years to come. Well, a couple of years as I'm getting old.”

There was a second gold for Great Britain as reigning world champion Hollie Arnold also broke the world record twice on her way to securing an impressive win in the women’s javelin F46.

Arnold, who finished fifth at London 2012, led with her first throw of 41.10m – five centimetres off the previous world record mark set by Poland’s defending champion Katarzyna Piekart. She then threw 41.68m in the second round before managing a massive 43.01m with her final attempt.

Back on the track, US middle distance man Michael Brannigan ran a superb race to win his first Paralympic gold in the men’s 1,500m T20, controlling the race from the gun to take the win in 3:51.73.

The 19-year-old, who won the world title last year, looked to have victory sewn up with 300m to go as he accelerated away from the field before crossing the line more than 20m clear of the chasing pack.

“That was what I was going for. I am pumped for this. And this isn't my last race of the season. I have a long track season and I can't wait to set some new goals next year. I look forward to 2020 Tokyo,” said Brannigan.

Poland’s Daniel Pek (3:56.17), who finished second four years ago, came through on the line to clinch silver again as Iran’s London 2012 champion Peyman Nasiri Bazanjani (3:56.24) was pushed in to third.

The USA’s Ray Martin lost out on the 100m T 52 title on Saturday (10 September) and he left nothing to chance as he took the 400m T52 final on from the gun. Speeding out of the blocks from lane three, he quickly caught his rivals in the outside lanes.

With 200m to go the 22-year-old was the clear leader and coming into the home straight it was only Japan’s world champion Tomoki Sato that could threaten Martin’s chances of retaining the title he won four years ago.

Genyn, who competed in wheelchair rugby at London 2012 but was forced to stop playing after breaking his leg in an accident off the pitch, looked impressive as he pushed hard to the line ahead of Algeria’s Mohamed Berrahal (21.70) and Mexico’s Edgar Navarro Sanchez (21.96), who won silver and bronze respectively. London 2012 champion Tony Piispanen finished just out of the medals in fourth place.

“I don't think it's really sunk in yet, but it's a great feeling. I trained very hard for it, I did everything I could for it, waking up early mornings because it’s morning races and I’m not a morning person,” said Genyn.

“I also kept away from eating fries during the training period and that’s the first thing that I’m going to do when I get home.

“Sport is my life. It doesn’t matter which one you do. Even as a child I couldn’t just sit down and read a book. I need sports to have fun and your everyday life gets easier.

“When you're in a wheelchair with not that many working muscles every muscle that’s trained hard helps you in your daily life, getting into the car or making it to the store. I think sport is the best medicine.”

China had earlier secured their second of three gold medals on Tuesday morning as 18-year-old Yiting Shi (28.74) tore through the field to win the women’s 200m T36 with a new lifetime best. The race for silver was won by Korea’s Min Jae Jeon (31.06) as Germany’s Claudia Nicoleitzik (31.13) took bronze.

Brazil’s Felipe Gomes brought home gold for the host nation in the men’s 4x100m T11-13 relay final, racing to the line after his teammates Diogo Jeronimo, Gustavo Araujo and Daniel Silva put in a terrific first three legs. It was a new Paralympic record for the Brazilian team, who stopped the clock at 42.37, with China (43.05) taking silver and Uzbekistan (43.47) winning bronze.

Poland’s Maceij Sochal (33.91m) came in to the Games as the world number one in the men’s club throw F32 after throwing a world record 37.19m to win the European title in June; he lived up to expectations with a gold medal at Rio 2016 – although his biggest throw didn’t come until the final round.