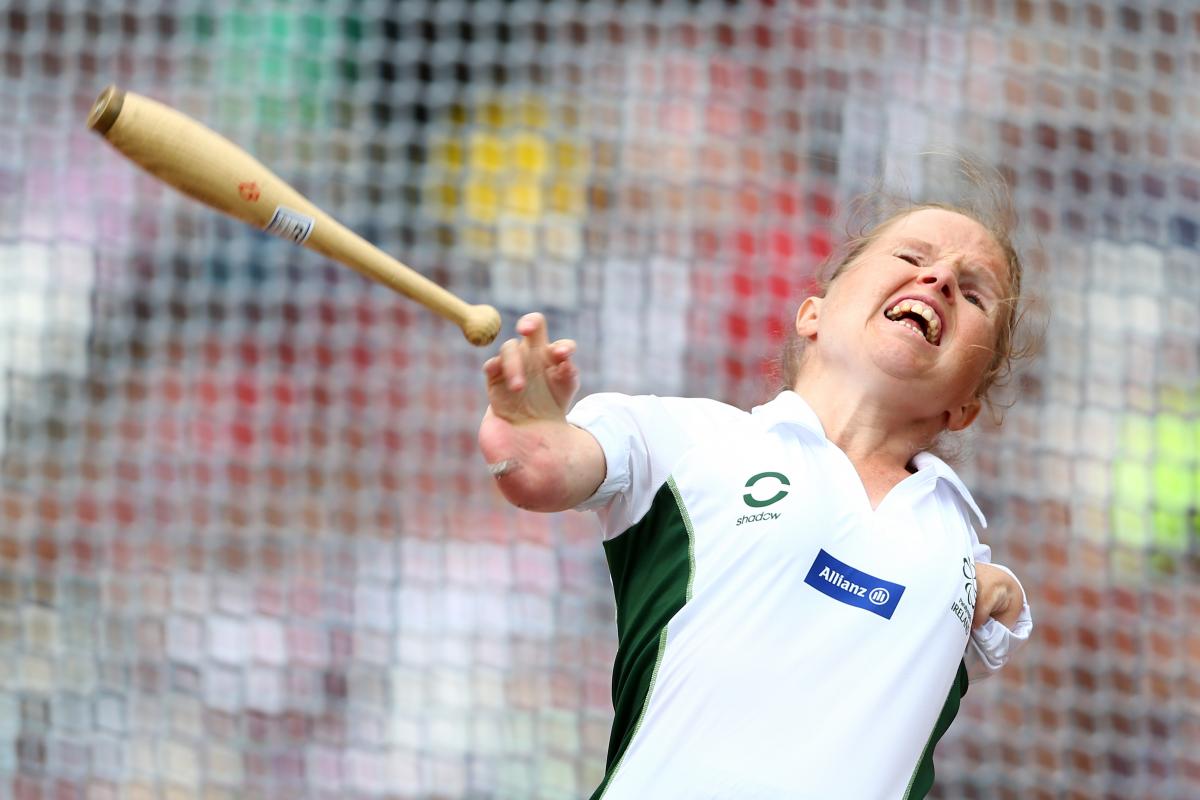 Catherine O'Neill of Ireland competes in the women's club throw F31/32/51 during day three of the Sainsbury's Anniversary Games. She announced her retirement in 2015.

Irish London 2012 Paralympic silver medallist discus thrower Catherine O’Neill has announced her retirement from competitive athletics. O’Neill who hails from Ramsgrange in County Wexford, has competed at three Paralympic Games for Ireland in the discus and club throw events; Sydney 2000, Beijing 2008, and London 2012.

O’Neill’s international career began 17 years ago at the IPC Athletics World Championships in Birmingham, Great Britain, where she made a memorable debut at the age of 22 with a win in the discus event. Qualifying for her first Paralympic Games in Sydney 2000, O’Neill placed fourth in the final; something she describes as a real learning experience. From there she repeated that performance with another fourth at the 2002 World Championships in France.

Having unfortunately missed out on qualification for the Athens 2004 Paralympic Games she took a break from the sport to have her son Calum in 2005. O’Neill returned in 2007 and secured qualification for a second Paralympic Games in Beijing 2008 where she finished sixth in the discus final. The 2011 IPC Athletics World Championships in New Zealand were undoubtedly her most successful claiming a gold in the discus and a silver in the club throw. She followed up those medals with her most coveted one; a Paralympic silver in the discus at the 2012 Games. O’Neill went on to compete at the 2013 World Championships in France and the European Championships in Great Britain last summer.

Speaking about her decision to retire O’Neill said: “I spent a good bit of time thinking about it after Swansea (2014 European Championships) and over Christmas I decided the time was right. I’ve had an amazing career with plenty of highs and lows along the way. I managed to win the Paralympic medal I always dreamt of and worked so hard for at my last Paralympic Games in London. I have to say when you step on the podium to receive a medal its some honour, but throughout my career it was always an honour to represent my country and wear the Irish colours abroad with pride.”

“I’d really like to thank all the people that helped me along the way; my coaches Pat Furlong, Michéal Bergin, Dave Sweeney, and Head of Paralympic Athletics James Nolan. Also, all the support staff deserve a huge thank you, especially the ladies that travelled with me to competitions. Everyone in Paralympics Ireland, the Irish Sports Council and Irish Wheelchair Association Sport that have supported me so well throughout the years also.

“Finally I would like to thank my family and friends, and my biggest fan of all, my wonderful son Calum! I wish the rest of the Irish athletes every success in trying to qualify for Rio and look forward to cheering them all on in 2016.”

Head of Paralympic Athletics James Nolan paid tribute to O’Neill: “The longevity of Catherine’s career in the sport has meant that she has overseen the growth of the movement and constantly increasing standards in Paralympic sport. It is very fitting that she medalled in what was the biggest, most successful Paralympic Games ever; London 2012 in the full glare of the world’s media. Her ability to focus and get the best out of herself on the big occasion set an example for all the Irish Paralympic athletes. It was an honour to work alongside Catherine and I wish her all the best in the future.”

Irish Sports Council Chief Executive John Treacy also paid tribute to O’Neill: “Catherine has been a fantastic athlete and has had an incredible career, which we have been proud to support. I first meet Catherine in Sydney and she has represented Ireland with great distinction and has been an tremendous ambassador for the Paralympic movement. On behalf of the Council I want to wish her well in her retirement from international sport.”