“Then we found out the US had made a mistake (disqualified) and we were just celebrating and we were really happy."

Poland’s Maciej Lepiato raised the bar in the men’s high jump T44 as he set a new world record to seal gold on Monday (12 September) at the Rio Paralympic Games.

The 28-year-old, who finished top of the podium four years ago, added one centimetre on to the world record mark he set at last year’s World Championships as he cleared 2.19m on his second attempt.

He went on to attempt 2.30m but bowed out after his second failure at the new height. Great Britain’s Jonathan Broom-Edwards equalled his season’s best as he cleared 2.10m to take silver, and Venezuela’s Rafael Uribe (2.01m) won bronze.

Lepiato, who admitted success was not a given, said: “I feel very good, I trained really hard for this medal for four years after the Games in London to make sure I was prepared for Rio. The first day after London I was thinking about Rio, today I’m thinking about Tokyo.

“It’s not so easy, Jonathan Broom-Edwards has a personal best of 2.15m so it’s a really good competition and we always have a good battle for the gold medal. Next year we have the World Championships to look forward to in London.”

French star Marie-Amelie le Fur clinched her second Paralympic title in four days as she won the 400m T44 with yet another world record.

The 27-year-old, who won the long jump T44 title with a world record on Friday (9 September) started strongly and looked in control coming round the final bend, but she appeared to tire in the closing stages as Germany’s Irmgard Bensusan closed in with less than 30m to go.

The reigning world and European champion held on however, mustering up all the energy she could to cross the line in 59.27.

“It was a very hard medal to get so I am very honoured, especially because my opponents are so good, but I did well,” said le Fur, who took 0.03 seconds off the time she set winning the world title last October.

“I started very fast but I didn’t know until the end that I was going to win. So it was a close and even race and it’s better when you see you have won."

Bensusan also went under the 60-second mark, setting a new personal best of 59.62 and the USA’s Grace Norman (1:01.83), gold medallist in the triathlon on Sunday (11 September) won bronze.

World records also fell in the men’s javelin F57 as Iran’s Mohammad Khalvandi opened with 45.26m – 1.26m further than the previous best – only to throw even further on no fewer than three of his next five attempts.

The 22-year-old, who clinched silver behind Briton Jonnie Peacock in the 100m T44 on Friday (9 September), came off the final bend with the USA’s Hunter Woodhall also in contention, but with 50m to go he pulled clear, sprinting to the line in 21.06.

The double Paralympic champion from 2012 was quickest out of the blocks, followed closely by Australia’s 19-year-old Rheed McCracken (15.34). But he proved too good for his rivals as he powered home with a new Paralympic record.

“I’m so proud that I won. I won it for Tunisia, for my country. It was difficult. The level is getting better. The contenders are improving. I worked hard to defend my title,” said Ktila, who also takes on the 800m T34 in Rio.

“For now, I will enjoy the moment. Tomorrow, I have the qualifying for the heats (for the 800m). I’ll take it one step at a time. I’m ready for it; I will enjoy my win for a moment then get ready for tomorrow.”

“I am extremely excited. It has been 16 years (since he began in Para sport) and I finally got a gold medal. After all this it means victory to me,” said Fu, who is competing at his fourth Paralympic Games.

Brazil’s Alessandro Rodrigo Silva set a new Paralympic record as he won the discus F11 with a throw of 43.06m, over two metres clear of the field.

Germany’s 4x100m T42-47 relay quartet of Markus Rehm, David Behre, Felix Streng and Johannes Floors won a dramatic Paralympic gold medal to add to their world and European titles as the USA were disqualified, suffering the same fate as they did four years ago at London 2012.

Floors brought Germany home just behind the USA’s T43 sprinter Woodhall but the German team were consequently promoted to the gold medal position with a new Paralympic record of 40.82, while Brazil took silver (42.04) and Japan won bronze (44.16).

“I’m really happy with the time because it was under 41 seconds, which was really great,” said Rehm, who ran the first leg.

“Then we found out the US had made a mistake (disqualified) and we were just celebrating and we were really happy.

“The crowd was amazing. We heard so much before the Games but when we came to the stadium for the Opening Ceremony we saw there was so much emotion here.” 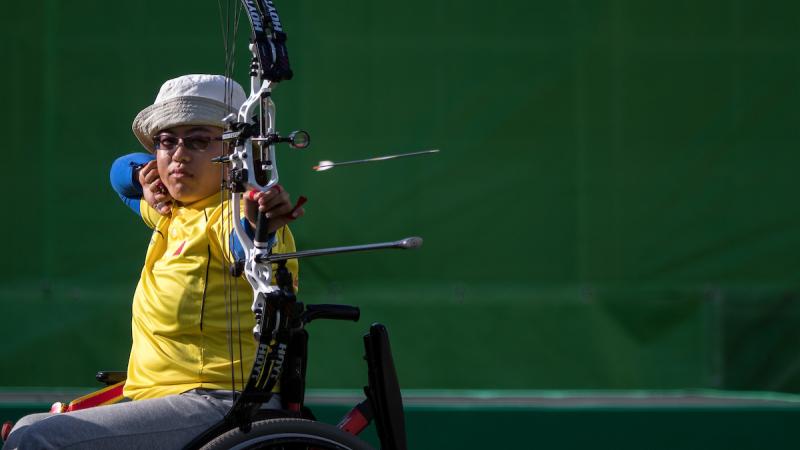