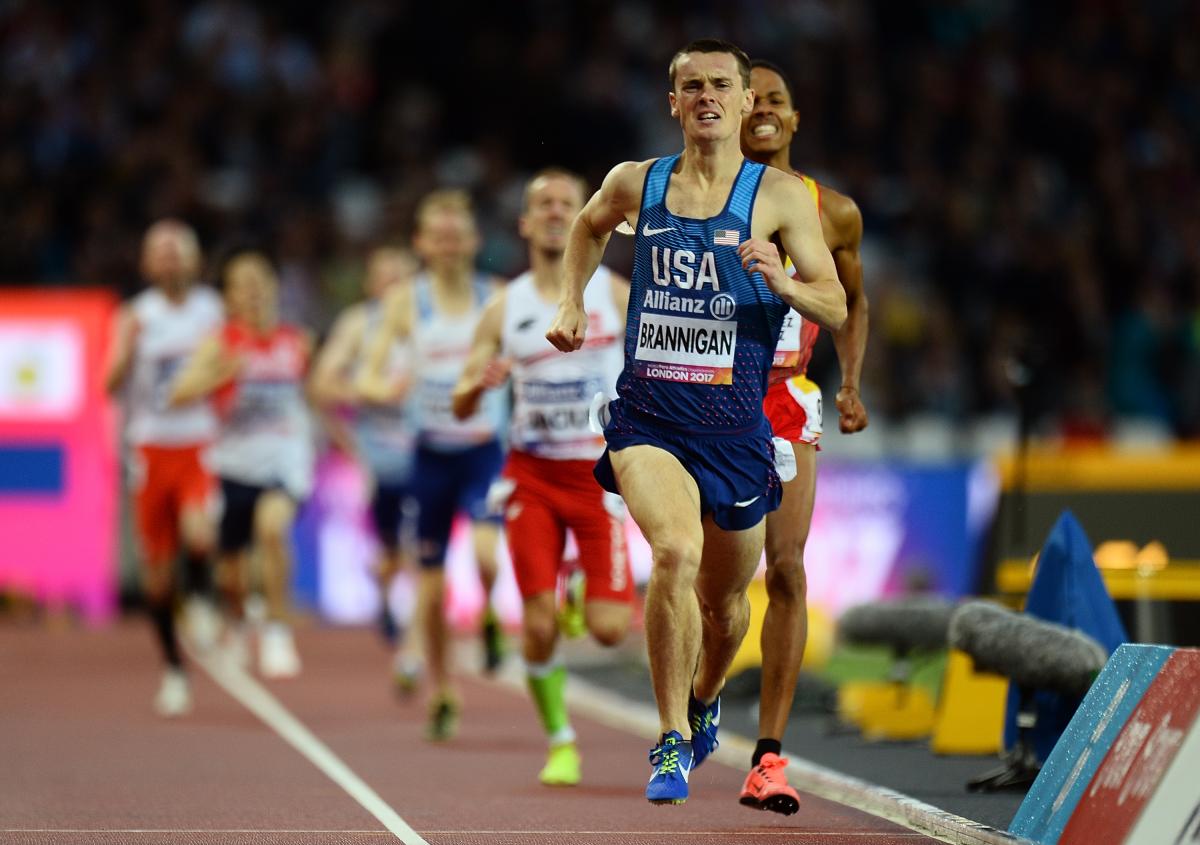 The USA's Michael Brannigan in action at the World Para Athletics Championships London 2017.

Twenty-six medals will be decided on the 10th and final day of competition at the World Para Athletics Championships in London, Great Britain, as China look to seal their place at the top of the medals table.

No fewer than 176 medals have been decided so far, with 31 world records broken. And there is plenty more action to enjoy before competition finally comes to a close at the London Stadium.

The USA’s Mikey Brannigan will attempt to secure a third gold medal out on the track, having already won the 800m and 1,500m T20.

Brannigan, who received a good luck message from Olympic 1,500m champion Matt Centrowitz ahead of his 800m victory on Saturday, broke the 5,000m T20 world record in April this year and has looked untouchable in each of his races so far.

A number of sprint races round off action on the track, with the Netherlands’ Marlou van Rhijn out to secure her third consecutive 200m T44 world gold. The ‘Blade Babe’ won her first major title – Paralympic 200m T44 gold – on this track in 2012.

Canadian Brent Lakatos has already won three gold medals in London – he will be hoping to add victory in the 100m T53 to his 200m, 400m and 800m T53 titles, but will have to get past a stellar field including Great Britain’s Mickey Bushell, Thailand’s Paeyo Pongsakorn and Frenchman Pierre Fairbank.

Ukraine’s double Paralympic champion Ihor Tsvietov stormed to 200m T35 gold on Wednesday (19 July) and on that showing alone will be hot favourite to notch up a second major sprint double in the space of 10 months.

The final event out on the track is the women’s 100m T54, and fastest in the field is Finland’s Amanda Kotaja. The 22-year-old will be hoping to match her teammate Leo Pekka Tahti, who won the men’s equivalent earlier in the week.

China have already won 17 medals out in the field and they could extend their lead at the top of the medals table if results go to form in the men’s discus F46.

Zhanbiao Hou sits top of the world rankings after throwing over 50m in May; he won this title two year ago with a world record throw of 52.64m – a mark that still stands today. Teammate Enlong Wei, silver medallist last time out, won the shot put F46 five days ago and the pair are likely to dominate action again.

The men’s shot put F32 features the top five in the world, led by Algeria’s Paralympic silver medallist Lahouari Bahlaz who has a season’s best of 9.46m. His teammate Karim Betina sits second in the rankings with Greek Paralympic bronze medallist Dimitrios Zisidis in third.

Italy could secure two gold medals out in field on the final day of competition as Martina Caironi and Assunta Legnante start as favourite in their respective events.

Caironi, who won 100m T42 gold a week ago, will be out to reclaim the long jump title she won in 2013. With defending champion and world record holder Vanessa Low absent from this year’s World Championships, the Italian looks hard to beat- she is the only Para athlete in the field to go over the four-metre mark.

Legnante meanwhile is the standout competitor in the women’s shot put F12. The visually impaired thrower, who often wears a distinctive mask with eyes printed on the front, has won gold at the last two World Championships as well as the last two Paralympic Games.