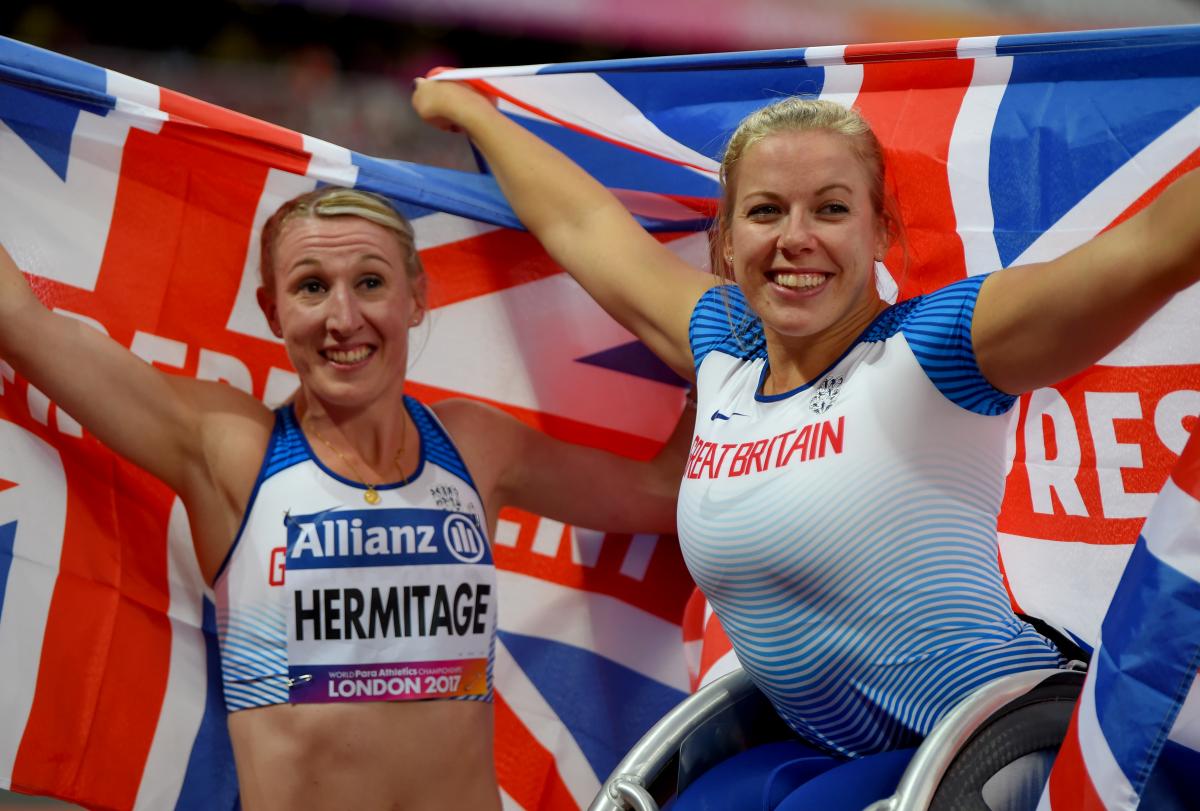 Great Britain’s Georgina Hermitage smashed her own 400m T37 world record on her way to gold on Thursday (20 July) at the World Para Athletics Championships London 2017.

The 28-year-old rounded-off 10 minutes of sheer joy for the British team and the cheering crowds as she followed teammate Hannah Cockroft, who had just clinched her third world title at the London Stadium, out on to the track.

Tunisia’s Neda Bahi went out strongly and established an early lead but coming round the final bend she began to fade as Hermitage raced to the front, holding her form strongly to the line.

“I am so relieved,” said Hermitage, who had endured injury setbacks earlier in the season. “That feels like a really long straight out there and I was totally spent by the end. I wasn’t sure at all about the time so was very surprised to see it was a world record.”

Cockroft delighted the crowds as she completed a hat trick of gold medals with a new championship record in the 400m T34.

The 24-year-old, who won double Paralympic gold at the London Stadium back in 2012, has been unbeaten at major competitions throughout her career – and she was clearly not going to blemish that copybook at London 2017.

Racing in the outside lane, Cockroft set off quickly at the gun and never looked threatened as she sped to the line, setting a new championship record of 58.29.

“I’m feeling really emotional. I even had a little cry,” said the 10-time world champion.

“I was confident until yesterday when I got full of cold. When I came to the start line I felt like I had nothing to put into the race.

China’s Yiting Shi lowered a nine-year-old world record to claim her second London 2017 title and extend China’s lead at the top of the medals table.

Shi had already torn the field apart in the women’s 200m T36 two days previously, and she was in a class of her own once again, increasing China’s gold medal count to 20. Teammate Cuiqing Liu (58.51) secured her first London 2017 gold with a win in the 400m T11 just one race before.

Tunisia’s Walid Ktila (1:44.79) secured his third gold medal of the Championships with an impressive performance in the 800m T34. Biding his time at the back of the field, the 31-year-old came round the final bend in lane four and powered past his rivals to set a new championships record. He still has the 200m to come and looks capable of repeating his quadruple gold from two years ago.

There was a golden hat-trick too for Canada’s Brent Lakatos (1:40.14) as he powered home to win the 800m T53. Racing towards the back of the pack, Lakatos injected a burst of speed with 250m to go, proving too good for his rivals yet again – he still has the 100m to go.

“The 100m used to be my strongest event for years. Now, I am doing well on the distances. But the 100m is still my most favourite so I am looking forward to it. It’s going to be a good race on Sunday.”

Brazil’s Mateus Evangelista turned the tables on Charl du Toit in the men’s 100m T37, having lost out to the South African in the 200m on Tuesday (18 July).

Evangelista burst out of the blocks and held his form all the way to the line and took the tape in a season’s best 11.48.

“After the silver I won on Tuesday, I really longed for the gold medal. I was really motivated and forced myself to show the best possible result. It is very emotional moment to me now as I was fourth in Rio and was very sad I could not make it there on my home soil,” said Evangelista.

There were two world records out in the field as Bulgaria’s Ruzhdi Ruzhdi took gold in the men’s shot put F55 and Germany’s Niko Kappel won the shot put F41.

Paralympic champion Ruzhdi added 14cm on to the mark he set at Rio 2016 with his third-round effort of 12.47m, finishing over one metre clear of his rivals.

“The key moment in the competition was the third throw. But I still did not reach my limits. I still can improve the record,” said the 26-year-old.

Kappel, who also won gold at Rio 2016, added three centimetres on to the world record he set earlier this year with his second-round throw of 13.81m.

"This is simply fantastic. After my gold medal at the Paralympics, to win gold again here is just a dream. These are absolutely brilliant conditions in London -- the crowd, everything. I was really up for tonight's competition and my preparation has been spot on. It's all just unbelievable,” he said.

Results also went to form in the men’s shot put F40 as Iraqi Garrah Tnaiash safely retained his Doha 2015 title with a season’s best throw of 10.49m, adding to the Paralympic title he won last year.

“I want to dedicate this medal to all the Iraqi people at home. When I won in Rio they were so happy and forgot the sad things in our country,” said Tnaiash.

“When I return home from London I am sure there will be a celebration. I hope my medal here can help bring some happiness to the people again.”

China’s Na Mi (35.08m) threw an F37 championship record to win the discus F38 ahead of Ireland’s F38 thrower Noelle Lenihan (32.12m) who won silver with a new championship record for her class; Italy secured their second gold of London 2017 thanks to Arjola Dedaj (4.65m) in the long jump F11.

Algeria’s Lahouari Bahlaz arrived in London as the world number one in the men’s club throw F32 and he underlined that position with a season’s best of 34.31m to take the gold ahead of Poland’s Paralympic champion Maciej Sochal (33.22m).