“This Paralympic Games could not have been better for me,” said the Spanish swimmer, who made her Paralympic debut and won two bronzes. 15 Oct 2016
Imagen 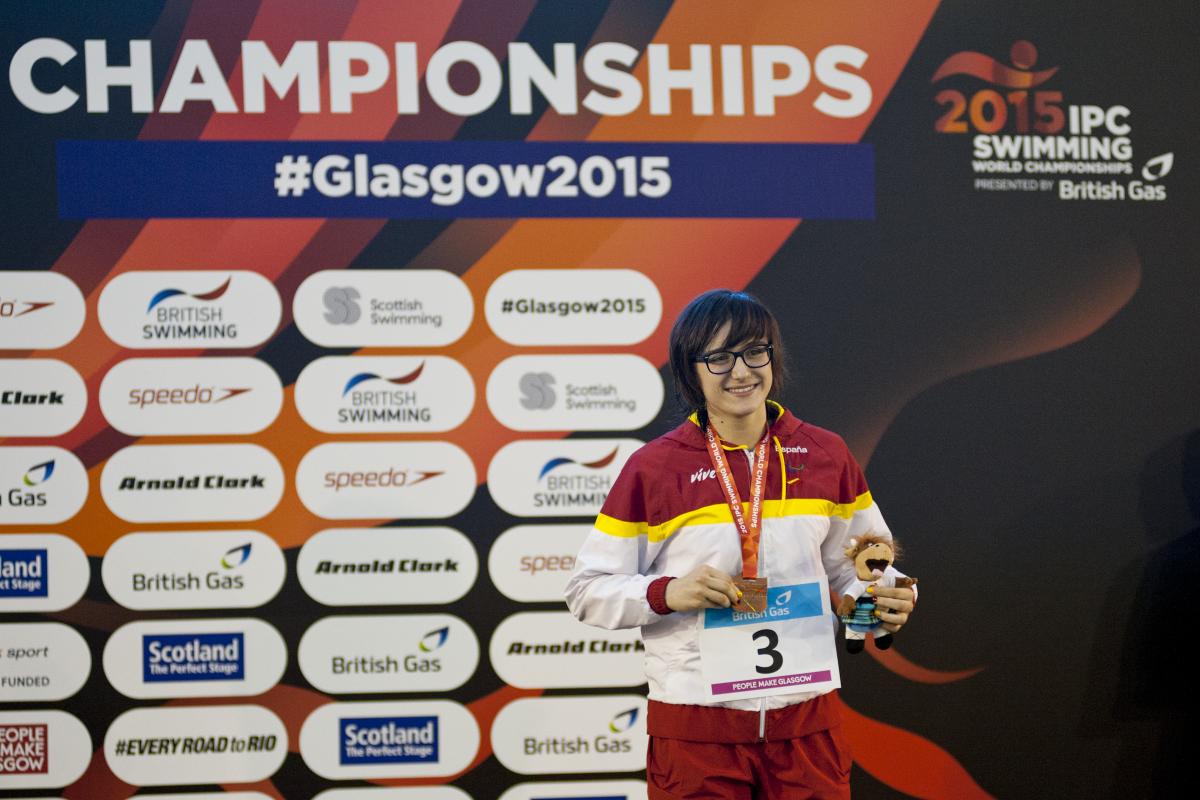 A woman in a tracksuit stands on the podium holding her medal and a small mascot.

“I would have never imagined I would actually achieve this, even if I dreamed about it. This Paralympic Games could not have been better for me.”

Maria Delgado Nadal arrived in Rio with a bag full of dreams and left her first Paralympic Games with two bronze medals, confirming she is one of the most promising Spanish swimmers.

Despite this success the 19-year-old is far from feeling satisfied and is currently training hard towards the 2017 World Championships in Mexico City and, further ahead, the Tokyo 2020 Paralympic Games.

“The two bronze medals were the result of years of hard work and are a dream come true,” she said.

“I would have never imagined I would actually achieve this, even if I dreamed about it. This Paralympic Games could not have been better for me.”

Nadal won bronze in the 100m backstroke S12 on 14 September and repeated that success in the 50m freestyle S12 three days later.

“The first event went as me and my coaches have planned. I could enjoy while racing and believe that swimming in front of such a big and supportive crowd is great,” she said.

“The second race was also awesome, but a Ukrainian rival fell into the water before the starting whistle and we had to start again, and that makes you un-focus.

“But still competing in a Paralympic final is spectacular and the feeling of swimming is impossible to describe.”

Nadal had already shown her potential at the 2015 World Championships in Glasgow, Great Britain, taking bronze in the women’s 100m backstroke S12.

“I did claim my first medal on the international stage at last year’s Worlds, but when I dive into the water I just focus on the race and on giving my best at that moment, and forget about previous competitions,” she said.

The Spaniard, who has a visual impairment due to a congenital toxoplasmosis, took up swimming aged seven years-old and, since then, she has “liked going into the water very much.

“I am also studying sports science at the University of Madrid, so I have little free time between studies and trainings. But when I do, I like hanging out with friends.”

Nadal lives at a high performance sporting centre and devotes between six days per week training six to seven hours each day.

“A new season is about to begin and I am already looking forward to the Worlds next year in Mexico City,” she said.

“My long-term objective is Tokyo 2020, but my main goal is to keep improving day after day.

“My biggest dream is to win gold at a Paralympic Games, that is something every athlete wants and I will work hard towards that.”

The World Para Swimming Championships will take place between 30 September and 7 October 2017.