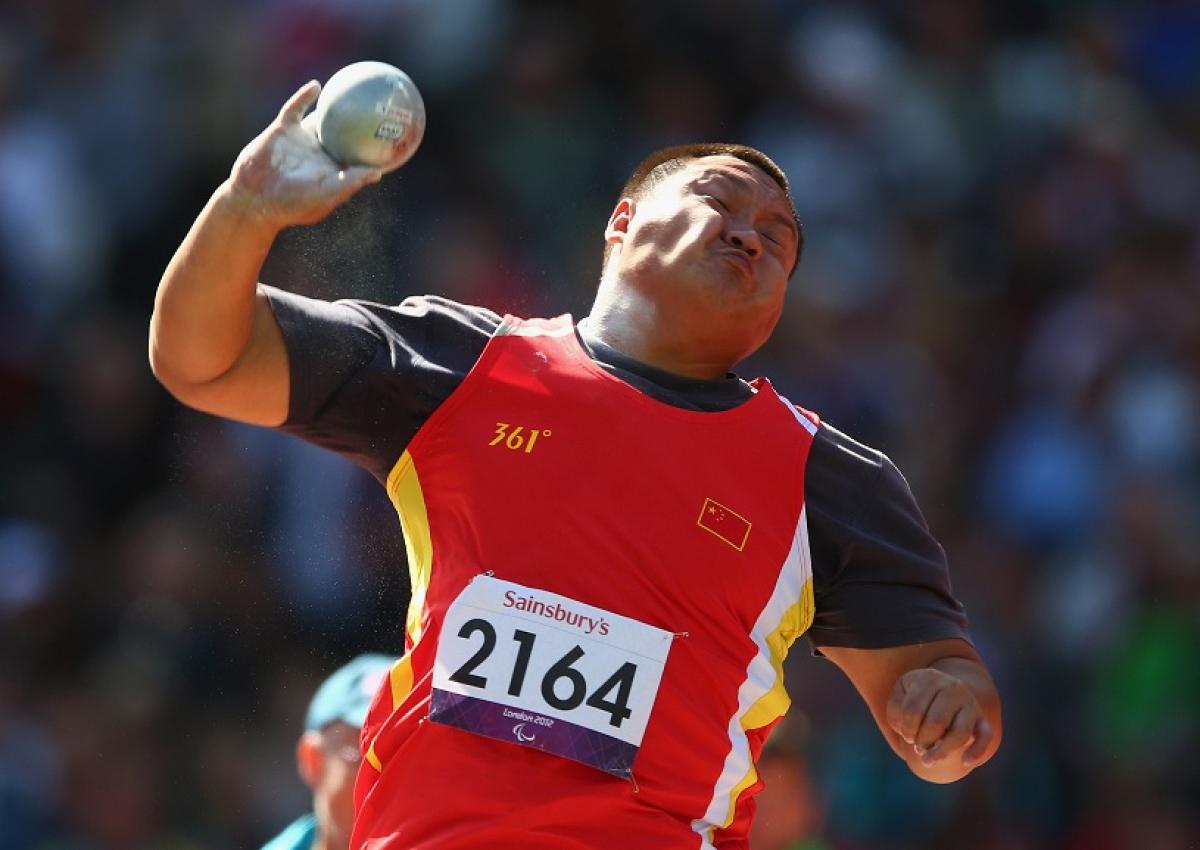 Dong Xia of China won the gold medal in the men’s shot put F37/38 at the London 2012 Paralympic Games.

In the men’s discus F54/55/56, reigning champion Leonardo Diaz of Cuba fought hard to keep the top position with the majority of his throws all reaching over 44 metres.

Algeria might not be at the top of the Athletics medal standings but they added three medals to their tally from just one event on Wednesday (5 September) morning.

Kamel Kardjena achieved a Paralympic record with a distance of 12.14m to claim gold in the men’s shot put F32/33 in front of his Algerian teammates. The silver and bronze medallists both peaked early with their best distances coming from their first attempts. Karim Betina, world record holder for F32 took the silver medal and Mounir Bakiri finished in third.

"It happened in the first throw and I tried in the other five attempts as well,” said Legnante. “I knew that I would have to do more than 16m and I'm really happy about what happened. It was good to make it clear immediately."

She claimed the top spot comfortably ahead of China’s Hongxia Tang and Liangmin Zhang, who took silver and bronze respectively.

In the men’s discus F54/55/56, reigning champion Leonardo Diaz of Cuba fought hard to keep the top position with the majority of his throws all reaching over 44 metres. His best distance of 44.63m (1019 points) set a new world record and guaranteed him the gold medal. Drazenko Mitrovic of Serbia set a new world record for the F54 classification and picked up the silver medal in front of third-placed Ali Mohammad Yari or Iran.

Ukraine’s Roman Pavlyk adds to his medal collection with his first gold of the London 2012 Paralympic Games in the men’s long jump F36. A personal best jump of 5.23m kept him ahead of silver medallist Mariusz Sobczak and Vladimir Sviridov, who took bronze.

Back from his gold medal celebrations with just a few hours sleep, Great Britain’s David Weir took to the track to begin his campaign for the third gold medal in the men’s 800m T54 heats. The British star put on a show for the home crowd as he burst off the starting line and stormed in front to finish as the fastest qualifier with a time of 1:37.09. World record holder Marcel Hug of Switzerland finished in second place after Weir but qualified with the slowest time of the eight finalists.

In the women’s 200m T44 heats, ‘Blade babe’ Marlou van Rhijn from the Netherlands qualified in the fastest time with a new world record in the T43 classification of 26.97. Gold medallist in the 100m T44 final, Marie-Amelie le Fur of France finished as second quickest with a new Paralympic record time of 27.49, just ahead of USA’s April Holmes.

Johanna Benson of Namibia finished as the fastest qualifier in the women’s 200 T37 heats, narrowly beating Bethany Woodward and Jenny McLoughlin, both of Great Britain.

World record holder Omara Durand of Cuba set a new Paralympic record in the 100m T13 heats with a time of 12.10 to make sure she qualified in the top position.