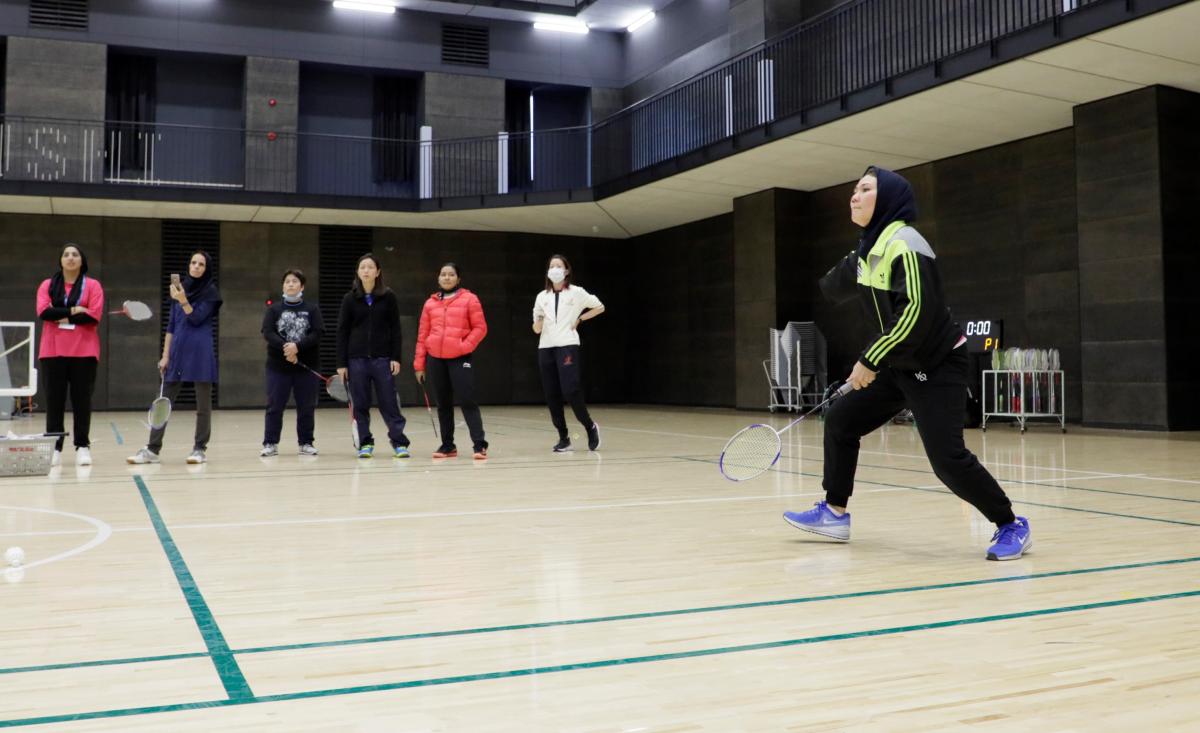 WOMAN OF SUBSTANCE: Nooria Najafi seen during a training session.
ⒸTokyo 2020
By Tokyo 2020

Nooria Najafi was one of the 24 female coaches from Asia who came to Japan in February for the second session of the Road to Tokyo 2020 workshop to help boost their para sports programme through their National Paralympic Committees (NPC).

Originally from Nahor, Ghazni Province in Afghanistan but now living in the capital city Kabul, Najafi lost her hand as a three-year-old during the Civil War. Her impairment however didn’t stop her from playing sports. She has been a table tennis player since childhood, but it wasn’t until ninth grade that she started to specialise in the sport.

The 23-year-old is ranked as one of the top female table tennis players in Afghanistan for athletes with an impairment and who are able-bodied. Unfortunately, Afghanistan have no Para table tennis team. Despite this setback, Najafi had dreams of representing Afghanistan at Tokyo 2020 in both the Olympic and Paralympic Games.

She had been competing in a number of international table tennis competitions - in both Para table tennis and ITTF table tennis - where she holds a ranking of 604 as of March 2020.

However, just over a year ago Najafi made the decision to start playing and coaching Para badminton; one of the two new para sports to be introduced in the Tokyo 2020 Paralympic Games. Her international Para badminton debut came in early 2019 at the International Wheelchair and Amputee Sports Federation (IWAS) World Games after receiving her first international classification earlier that week.

As a participant in the para Badminton Road to Games workshop, Najafi said the programme would not only help her own development but others in her country too.

“It's very interesting for me because in Afghanistan we don't have badminton coaches, so I came here and got a lot of information about badminton and players especially for people with impairments,” she said.

In fact, Afghanistan have only ever sent six athletes to the Paralympics since making their debut at Atlanta 1996 with only one female athlete making the team.

Unfortunately, female athletes and those with impairments in Afghanistan have many barriers to participating in sports, from not being able to access training facilities to limited coaching, harassment and an overall a lack of support. It’s something Najafi knows all too well.

With women’s sport continuing to grow and evolve around the world, organisations including Agitos Foundation and the International Paralympic Committee (IPC) have committed to 50 per cent participation from females across all para sports as well as in leadership positions.

“We believe that in order to have more female athletes, it is important to train more female coaches,” Agitos Foundation Development Senior Manager Jose Cabo said.

“Statistics show that only 17 per cent of the coaches that participated in Rio 2016 were females.”

“Some countries have a lot of barriers to participating, we believe that this kind of strategy, while it's not going to solve all the problems affecting woman's participation, will help. So that's why we are trying to get 50 per cent [women’s participation] in all the courses we deliver.”

For Najafi, who is passionate about all sports and who has played everything from table tennis to swimming, there had been times when she struggled to receive the training she needs to continue her development as a player.

“I [use to] play table tennis but because in Afghanistan, girls didn’t get accepted into these classes so I couldn’t wait to attend this class. I'm going to get a lot of information,” the graduate from a Bachelor of Physical Education said.

With the Olympic and Paralympic Games quickly approaching, when asked if Najafi would like to come back to Tokyo for one of the biggest sporting events in the world, she replied “Inshallah” [“God willing”].

With a steady growth of women in sport and new initiatives providing equal opportunities at all levels, Road to Tokyo plays a vital role in encouraging more women and coaches like Najafi to play an ever-important role in elevating the Paralympic movement globally.