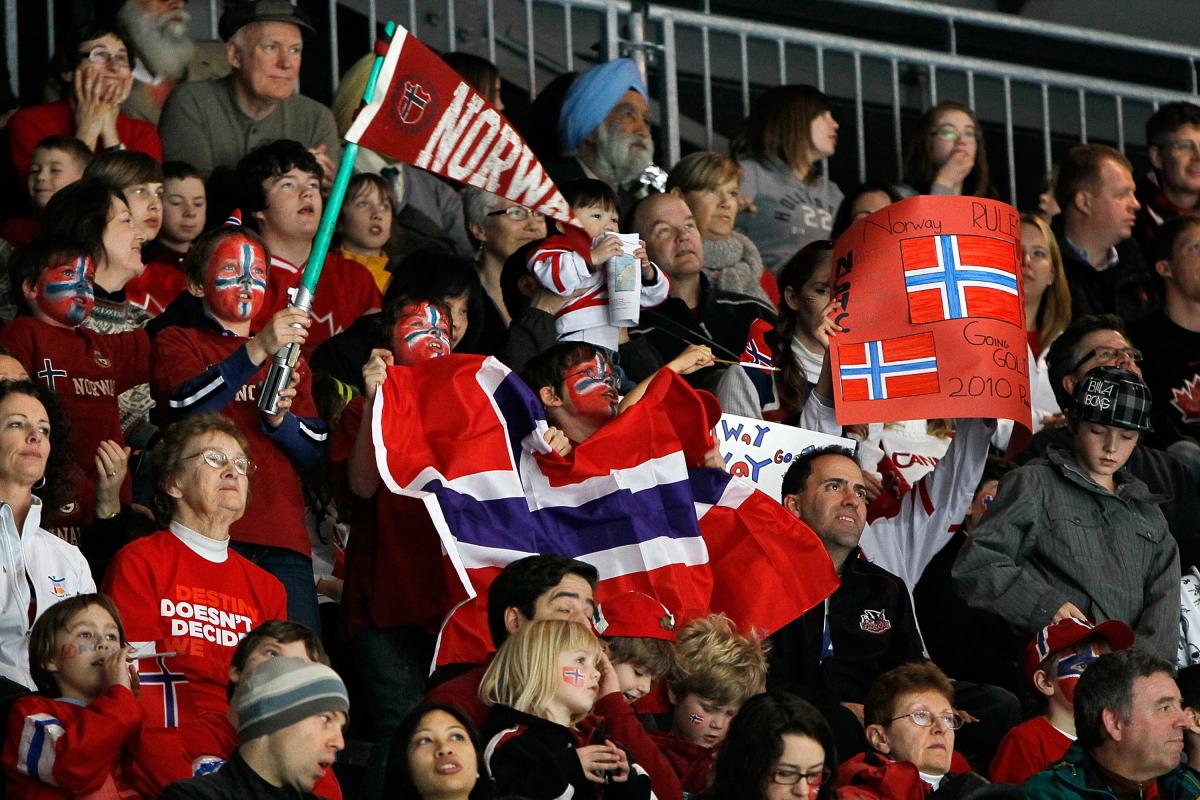 The bronze medal game between Canada against Norway at the 2010 Winter Paralympics was an intense game at the UBC Thunderbird Arena yesterday with Norway winning 2-1 scoring in heart breaking fashion. Team Norway exacted their revenge on Team Canada from their early meeting in the tournament having lost 5-0 to them in their last preliminary game on Tuesday night.

"I just wanted to shoot the puck and it deflected and it made a nice arch and went into the net." said the Eskil Hagen, the Norwegian defencemen. He has been sort of a Canadian nemesis having scored both goals in their 2-0 win in the Gold medal game against Canada at the 1998 Paralympic Games in Nagano, Japan. Hagen has a fondness for Canada as his girlfriend is Canadian Cross-Country skier Shauna Marie White.

Rolf Einar Pedersen, the Norwegian defender who scored on a penalty shot rub a little salt in the Canadians wounds saying "for us little Norway to beat Canada at home is it great" it feels like a gold medal". Pedersen added that his team had to be patience reiterating saying "we had to be patience and wait for the good chances and it worked late in the third".

Also, this is the second straight game in a row where Team Canada has lost the game in the final moments losing to Japan 1-3 yesterday the Japanese forward Daisuke Uehara scored on a beautiful give and go play from Japanese Assistant captain Kazuhiro Takahashi on a 3-on-1 odd man.

The Norwegians had a different game plan coming out today which was to play solid team defense as the Norwegian netminder Roy Johansen said “the only thing we talked about before this game was defense and it paid”.

Both teams had chances to win with Norwegians having an excellent scoring opportunity as their captain Tommy Rovelstad took a hard shot on the power play at 7:50 of the second period but Canadian netminder Paul Rosen came up with a big save. But then, the momentum swung to Team Canada as Greg Westlake powered to net on a nice pass from Team Canada forward Billy Bridges but was stopped by Roy Johansen, the Norwegian netminder. The Norweigan head coach Morten Haglund said “the goal was the difference even though we were badly outshoot”.

However, the Canadians seemed not to have that same level of intensity and desire to win compared to their last encounter with Team Norway on Tuesday night seeming to come out flat in the third with Adam Dixon, Team Canada Ice Sledge Hockey forward saying "it is devastating we wanted to walk away with our pride we should have buried them earlier".

The Canadians broke the deadlock three minutes into the third opening with Canadian Ice Sledge defencemen Adam Dixon scoring on a bullet shot from top of the circle.

However, the Norwegians struck back at 6:08 of the third leveling the score courtesy via a penalty shot with that was awarded to them as Adam Dixon was called for covering the puck in the crease and Team Norway’s forward Rolf Einar Pedersen put a beautiful deke on the Canadian goaltender Paul Rosen and then slid it past him.

The Canadians despite the loss feel that the support that the fans and the media has given to Ice Sledge Hockey will really help the sport grow in the future as Canadian goal-scoring leader in the 2010 Paralympics said we need all of Canada supporting Ice Sledge Hockey". Jean Labonte, the Canadian captain added that he is amazed on how many people have come out to these games.