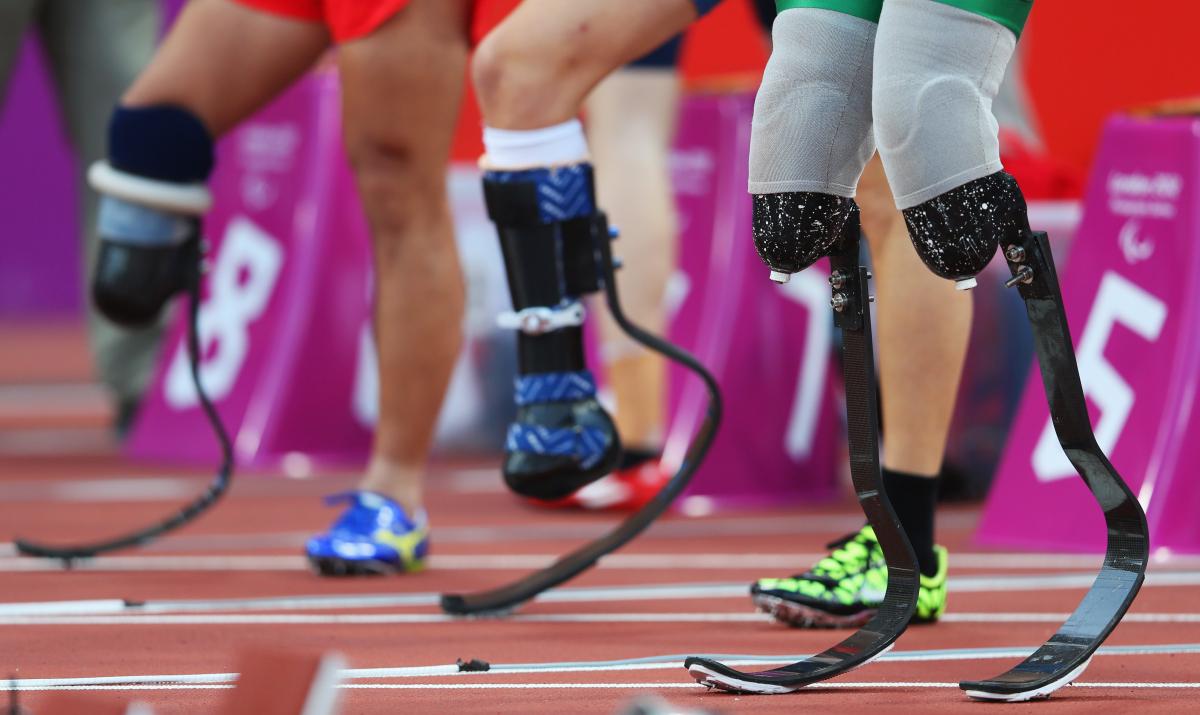 A view of the prosthetics legs of Alan Fonteles Cardoso Oliveira of Brazil during the London 2012 Paralympic Games.

“Technology often aims to take away unnecessary obstacles and inefficiencies through a process of rationalisation. Technology is supposed to make life easier and more comfortable, which is generally not the goal in sport."

A clear, ethical and standard framework on the use of new technology in Paralympic sport is required, according to Ivo van Hilvoorde of the Vrije Universiteit Amsterdam, who fears without it, the credibility of the Paralympic Games could suffer.

Speaking on the final day (4 May) of the International Paralympic Committee’s (IPC) VISTA 2013 conference in Bonn, Germany, the Dutch scientist explained how technological innovation influences issues of classification and the perception of Paralympic performances.

The assistant professor at the Faulty of Human Movement Sciences said: “I believe the Paralympic Movement is at a crossroads where clear choices have to be made about the role and increasing dominance of technological innovation.

“What is needed is a clear conceptual and sport ethical framework for evaluating and grounding choices about the implications of new technology, its relation to sport immanent classifications and its relation to the changing definitions of disability.”

van Hilvoorde started his talk by referencing sport philosopher Bernard Suits’ definition of sport as a voluntary attempt to overcome unnecessary obstacles. According to van Hilvoorde the disclosure of these obstacles becomes particularly relevant when confronted with a commercial and technological imperative.

“Sport has an intimate but at the same time paradoxical and sometimes threatening relationships with technology,” he explained.

“Technology may even take away ‘unnecessary obstacles’ that were once part of the specific goal of sport.

“Technology often aims to take away unnecessary obstacles and inefficiencies through a process of rationalisation. Technology is supposed to make life easier and more comfortable, which is generally not the goal in sport.

“In short, society influences the identity of sport directly, but also more indirectly through a subtle process of valuation of both abilities and disabilities.”

In his hour long keynote address to over 200 sport scientists and researchers, classifiers, coaches, sports administrators and athletes, van Hilvoorde highlighted that recent technological innovations in some Paralympics sports made success similar to Formula 1.

“Performances are not just individual but group performances in which technicians, scientists and engineers play a legitimate and, in many cases, crucial role. This means that differences in quality are also based upon differences in budget and expertise,” he said.

According to van Hilvoorde education is essential for the Paralympic Movement in ensuring audiences understand that human performance is still the critical factor in success.

“Education and explanation about the role and impact of technology is necessary. Paralympic athletes still fight against several persistent stereotypes. I also noticed in conversations that there is distrust that outsiders would think that technology makes performances easer.

“New technology does not take over human abilities but demands more diversity of abilities, more strength, endurance, dexterity, agility, talent, as can be illustrated by the evolution of the wheelchair in sport.”

Speaking to www.paralympic.org after his VISTA keynote, van Hilvoorde added that education and research was needed quickly in order to engage the growing global audience showing an interest in the Paralympic Games and the Movement.

“I think it is important for the credibility of the sport.

“Able-bodied sports have a history of technology use, but they have more credibility because there is a longer tradition, stability and robustness of their relationship with their audience.

“Paralympic sport is still fairly new, and in a critical phase of gaining interest. The danger is people relate performance too much to technology, so education of its role is crucial. That is why a standardised and sport ethical framework is required.”

The sixth IPC VISTA conference started on Wednesday (1 May) and concluded on Saturday (4 May). VISTA’s is to promote and advance the mission, goals, objectives and reputation of the IPC and provides a platform for sport scientists to meet with experts in the field of sport for athletes with an impairment.

This year’s theme was “Equipment and Technology in Paralympic Sports”.