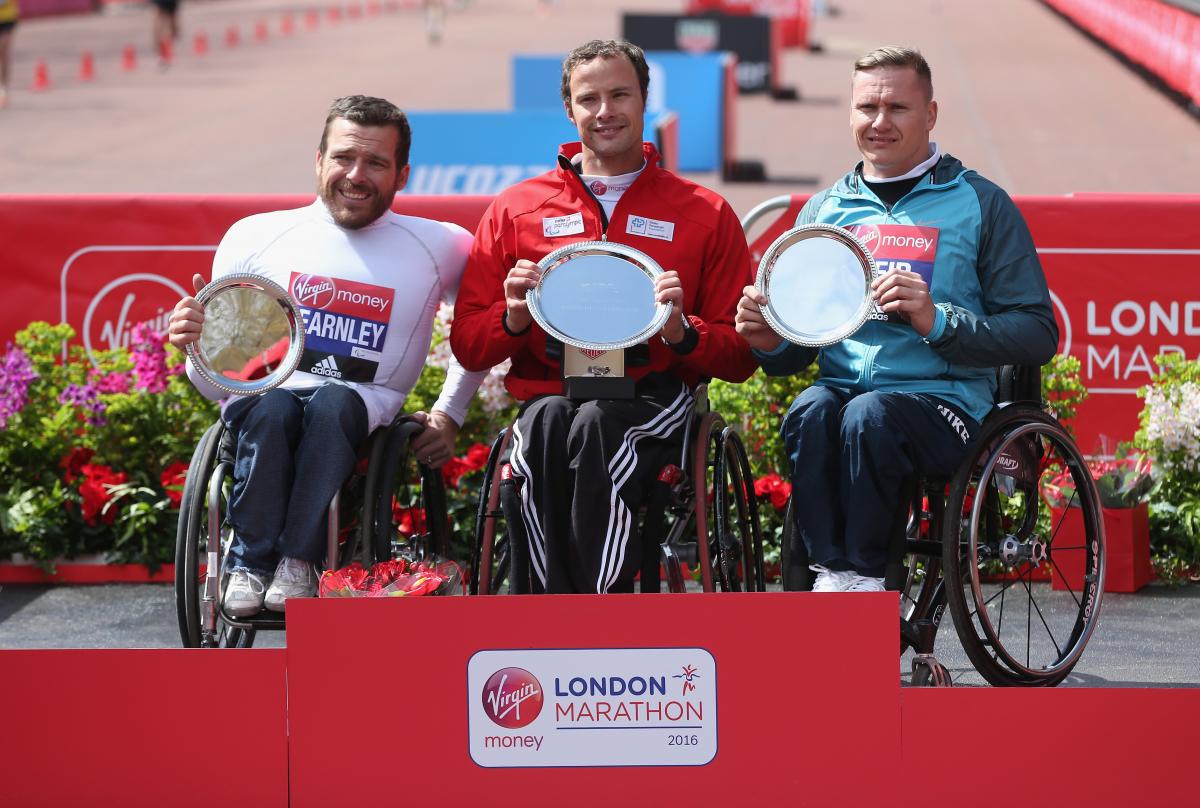 “If there is a course in the world where I think he can be beaten it is here.”

“If there is a course in the world where I think he can be beaten it is here,” said Fearnley, who finished runner-up behind Hug at the Rio 2016 Paralympic Games, then in Chicago and New York, USA.

Hug won a clean sweep of marathon titles in 2016, and picked up the Abbott Marathon World Majors Series X trophy after winning in Boston on Monday (17 April).

And while the Swiss wheelchair racer may start as favourite around the streets of the capital this weekend, Fearnley is certain he can be beaten.

“If there is a race in the world right now that I would think he could potentially lose, it would be this one,” continued Fearnley, who won the London marathon in 2009 and again in 2013.

“The field is stacked, it’s a technical course, there are crashes, there are flat tyres, there are 20 athletes out there to take every corner. This is a tight race.

“Right now there are six guys that I could see potentially winning the race – Marcel, Dave (Weir), Ernst (van Dyk); there are three Japanese guys that are potential winners of Sunday.

“Honestly, it’s the first time for the while that I would say he’s going to have to race very well to get the win.”

As for Hug, the two-time London champion is determined to start Abbott WMM Series XI, which kicks off on Sunday, where he left off - with yet another win.

The Swiss Silver Bullet is determined to take full advantage of the confidence he now has after winning all six major marathons last year – although he admits such success could be hard to repeat.

“It’s a great motivation for me to start again. It’s a new series, it begins from zero, so everyone has a chance to win; it’s a big challenge,” he acknowledged.

“It’s difficult to top that – I think I cannot top it. I just try to do the same thing. But I don’t feel any extra pressure.”

Another man to look out for on Sunday is local man David Weir, who will be vying for a record seventh win on home territory.

Weir retired from track competitions after the Rio 2016Paralympic Games, where he failed to finish on the podium.

He’s now happy to be focussing solely on the roads, although the decision to continue racing at all was not one he took lightly.

Weir, who won the Paris marathon earlier this month, explained: “There was a lot of thinking and I felt like packing it all in to be honest, but I like training and I like being out. I like being able to go to the park and push miles.

“It’s a good healer for mental health to get out and kill your mind for a bit. So I didn’t really have that much time off after Rio for that reason - I needed to get out and enjoy the training.

“It’s nice just to concentrate on one event. I’ve always had to think about getting back on the track once London is over, and it was quite challenging in the last few years.”

This year’s event will be Weir’s eighteenth time racing round the streets of London, but the 37-year-old admits it never gets any easier. Asked about his plans for the future, he remained tight lipped – but hinted at an announcement soon.

“It gets difficult – there are lot of athletes coming through from Japan that are pushing well, so it’s not getting easier but that’s good for the sport. It’s not just a one-man band.

“I know what I want to do. We’ll see what Sunday brings. It could be special race, it could be final race; it might spur me on.”

And what will it take to beat Hug?

“It’s hard to say,” continued Weir. “He’s improved on everything he’s weak on, he’s just at that top level now where you go in to every race thinking that you’re going to win.

“I had that period in 2006 and 2007 when you feel that you are so far ahead you’re going to win today, and that’s probably the way that he’s feeling.”