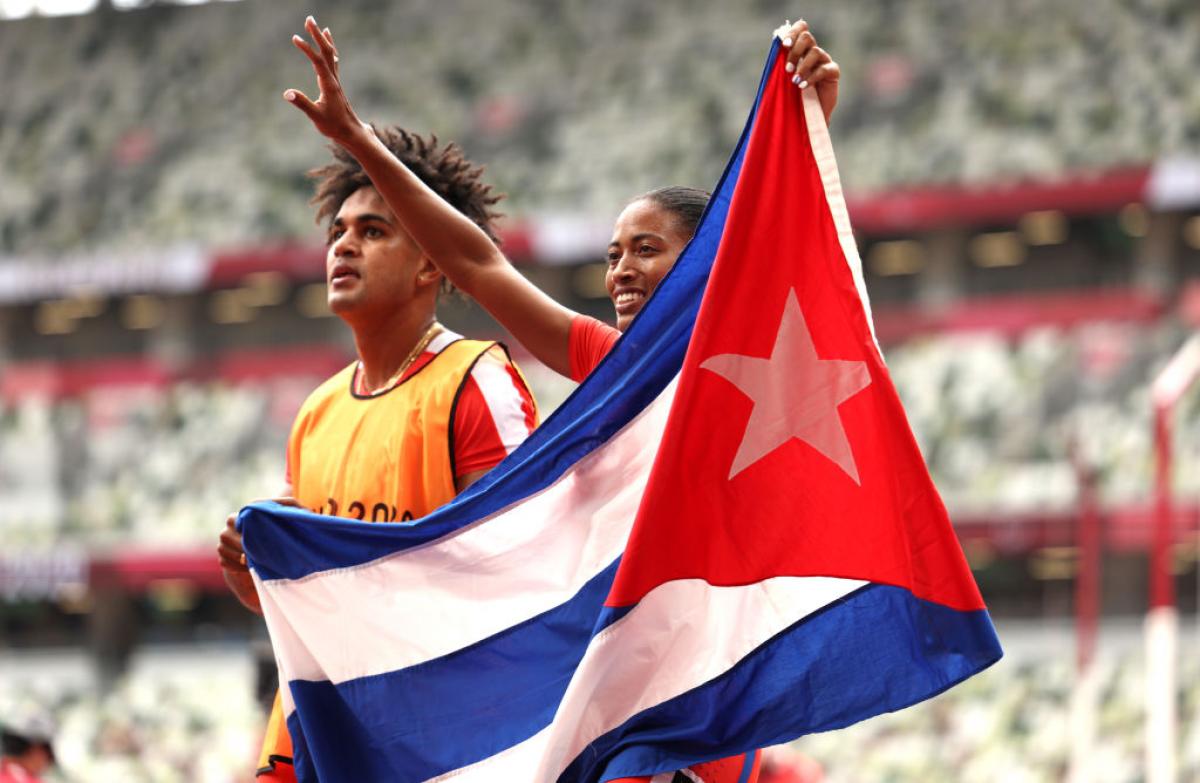 Cuba’s Omara Durand stormed to her sixth Paralympic Games gold as her decade of dominance continued on Tuesday (31 August), day five of Para athletics at Tokyo 2020.

The 29-year-old ’queen of speed’ won the women’s 400m T12 by more than 2.5 seconds to claim her third successive title in the event.

“My secret is sacrifice for training and good coaching. That is all,” the 11-time world champion said.

It was a special morning for Cuba as the country bagged its first two gold medals at Tokyo 2020. If Omara was going for her sixth title, Robiel Yankiel Sol made his Paralympic debut in the men’s long jump T47.

His first attempt was a Paralympic record of 7.46m that gave him the gold medal three centimetres ahead of USA’ defending champion Roderick Townsend. RPC’s Nikita Kotukov finished in third.

The competition also marked the Games debut for Afghanistan at Tokyo 2020 as Hossain Rasouli set a personal best of 4.46 to finish 13th.

Marcel Hug made it a golden double in the racing wheelchair he helped design, with victory in the men’s 1500m T54 to add to his 5000m triumph on Saturday.

And this time Switzerland’s Silver Bullet clocked a world record of 2:49.55.

"I can't believe it. It's crazy, just crazy,” Hug, who will also compete in the 800m and marathon, said. “My goal here was a medal, then maybe my dream was to win gold. To win gold with a world record was beyond my thoughts.”

Thailand made it to the podium with silver and bronze as Prawat Wahoram ended in second and Putharet Khongrak in third.

Brazil claimed a historic 100th gold medal in Paralympic history when Yeltsin Jacques triumphed in the men’s 1500m T11 setting a new world record (3:57.60). It was his second victory in Tokyo, after the gold in the 5000m T11 on day one.

In the women’s javelin F56 Hashemiyeh Motaghian Moavin won the first Paralympic gold medal by an Iranian woman in Para athletics with a world record throw of 24.50m.

China and RPC make it double

RPC is second in the Para athletics medal standings with eight gold – one more than Brazil. RPC athletes topped the podium twice in the morning session. First, Anton Kuliatin in the men’s 1500m T13 final and later with Vladimir Sviridov and a new world record in the men’s shot put F36 (16.67m).

The action continues on day five with 13 finals in the evening session. Complete results can be found on Paralympic.org.