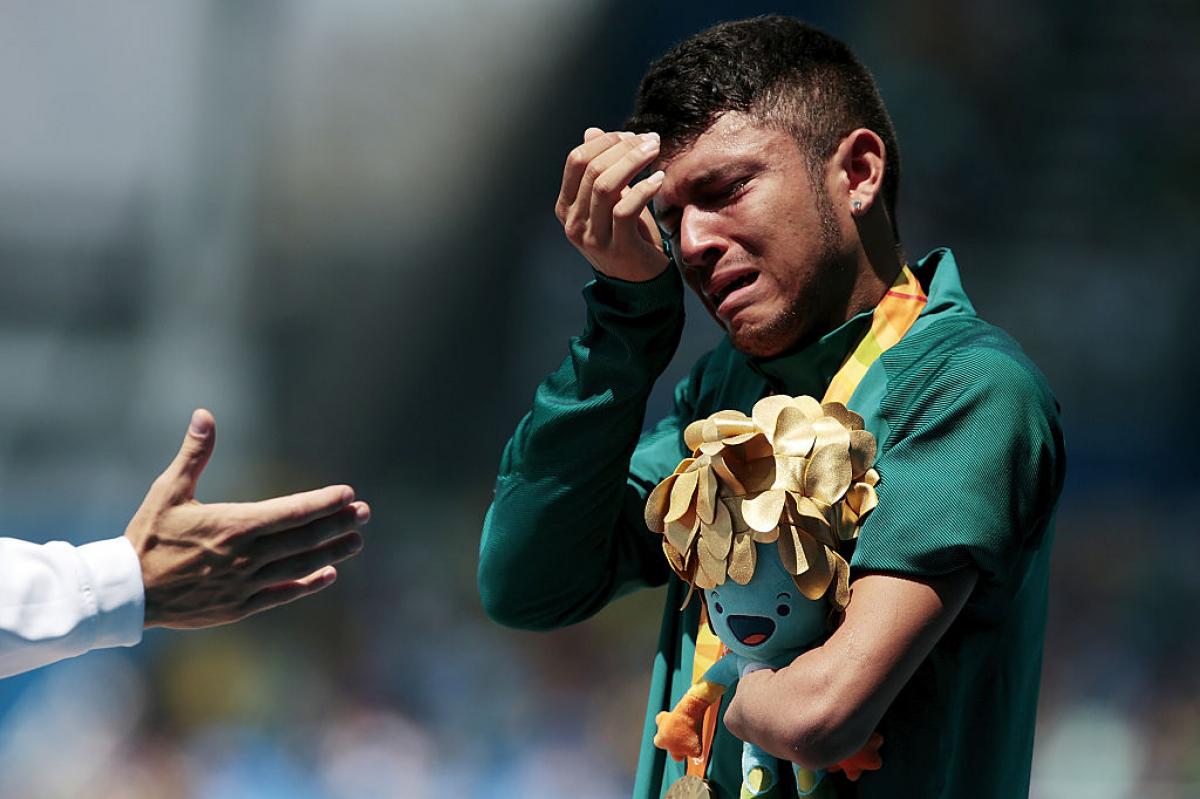 “Crying during my medal ceremony was an absolutely amazing memory, but my overall performance with three medals is still on my mind. It meant a lot, because my accomplishments changed the way people used to see me. Now I'm not the guy with an arm impairment anymore, people see me as a high-level athlete."

For Brazilian sprinter Petrucio Ferreira, the Rio 2016 Paralympic Games – which began exactly one year ago today (7 September) – were a dream come true.

The 20-year-old won 100m T47 gold, breaking the world record twice on his way to the top of the podium and he quickly became one of the host nation’s star performers alongside the likes of swimmer Daniel Dias.

Ferreira only began competing in 2014, but he showed early indications of his potential the following year when he broke the 200m T47 world record in Sao Paolo, Brazil. Sadly, he was unable to compete at what would have been his first World Championships in Doha, Qatar, later in 2015 due to injury.

Rio 2016 was in fact his first major global competition, in front of a home crowd too – but it was no baptism of fire.

Instead, Ferreira thrived off the support of his many fans, shattering the 100m T47 world record which had stood for a remarkable 24 years and adding 400m T47 and 4x100m T42-47 silver for good measure.

Reflecting on the Games one year on, Ferreira, who lost his left arm below the elbow aged two after an accident with machinery on his father’s farm, said:

“Crying during my medal ceremony was an absolutely amazing memory, but my overall performance with three medals is still on my mind. Representing my country was like a childhood dream coming true.

“I can say I felt pretty comfortable competing in front of my crowd. They really cheered us on and had a key role in our performances.”

The Brazilian believes the Games not only changed his life, but also changed the perception of Para athletics and Para athletes in his country.

“It meant a lot, because my accomplishments changed the way people used to see me. Now I'm not the guy with an arm impairment anymore, people see me as a high-level athlete,” he acknowledged.

“A lot of things changed. My preparation was one of them and it stems from the fact that I was even more motivated after the Games. I am now aware of the pressure for even better results and that is why I'm always training to do my best.

“I think the overall awareness of both Olympic and Paralympic athletes changed. People started to recognize our faces more easily. It changed especially in terms of media attention. They really started to cover Paralympic sports better in Brazil. This kind of acknowledgment got much better.”

Ferreira went on to be named 2016 Male Paralympic Athlete of the Year in Brazil, and he proved just how much Rio 2016 inspired him when, ten months later, he lined up at the London 2017 World Championships.

The Brazilian won his first world title in the British capital, lowering his own world record once again as he clinched 100m T47 gold in 10.53 seconds. He completed a coveted sprint double with a win in the 200m T47, setting a new world record of 21.21 in that event too.

The future is certainly bright for Ferreira, but the Rio Games will remain close to his heart forever.

“Those Games were pretty special, unique for me, especially being my first Paralympic Games, representing my country, at home. But as much as I look back and cherish the memories from Rio, I always keep my eyes on getting ready for the next challenge, and it is Tokyo 2020.

“It motivates me even more to get on the track every single day, work as hard as I can to be well prepared when the time to compete comes around.”