The Sochi 2014 silver medallists lead at the ice sledge hockey Euros on goal difference after their second game, whilst Italy and Norway are tied in second. 06 Apr 2016
Imagen 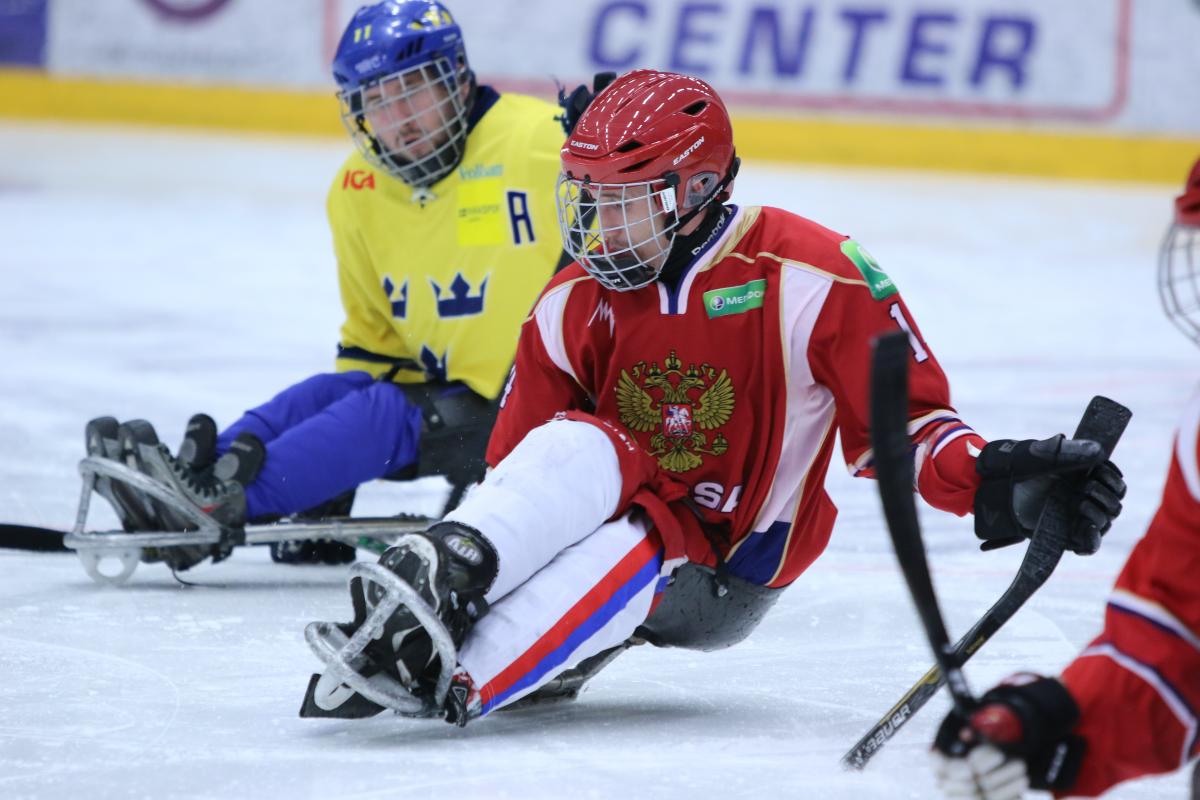 ⒸMaria Paulsson
By Kim McGreal | For the IPC

Russia’s lead at the top of the standings is based on goal difference, with defending champions Italy and Norway tied for second after they both took wins on Wednesday.

Sochi 2014 Paralympic Games silver medallists Russia took the lead at the top of the table on goal difference at the IPC Ice Sledge Hockey European Championships in Ostersund on Wednesday (6 April), with a win over hosts Sweden.

The relentless Russian attack began early in the first period in their game with the home team.

They opened the scoring with two goals in the first five minutes. With Sweden struggling to get the puck out of their own zone, it seemed clear early on that Russia were going to fight hard. By the end of the first period, the score was 5-0.

The rapid-fire domination continued in a similar vein throughout the rest of the game. But Sweden managed to score, thanks to Robin Meng assisted by Niklas Ingvarsson and Per Kasperi in the second period.

While the knowledge that they had prevented a shut out may have improved their outlook in the game, it did not change the response from Russia who continued to fire pucks at the Swedish net. The period ended 11-1, and it was more of the same in the third period, with Russia outshooting Sweden – over the course of the whole game – by 52-2.

The final score was 16-1, highlighted by hat tricks from Dmitrii Lisov and Nikolai Terentev.

Russia’s lead at the top of the standings is based on goal difference, with defending champions Italy and Norway tied for second after they both took wins on Wednesday.

Italy played close rivals the Czech Republic, who went into the game confidently but started in a similar way to Tuesday’s (5 April) game against Russia.

By the end of the second period, Italy were leading 3-0 thanks to two goals from Sandro Kalegaris, and one from Valerio Corvino.

The Czech team came back onto the ice in the final period under pressure. However, despite outshooting their opponents for the first time, they were unable to find their way past Italy's netminder Santino Stillitano. Towards the end of the game, it appeared the Czech Republic were going to hold Italy to just the three goals, but Werner Winkler got one more for the team with just 16 seconds showing on the clock.

Norway played Germany, who were looking for their first win of the tournament.

The Germans came out strong and the game got off to a fast start with an early penalty kill that looked so aggressive it resembled a power play.

But 11.30 into the period, Norway’s Loyd-Remi Pallander Solberg came in with a blast from Magnus Bogle's pass and got the scoring started. Just 93 seconds later, Knut Andre Nordstoga, assisted by Rolf Pedersen, made it 2-0 with his goal.

When Germany's Bernhard Hering – who had scored their lone goal in Tuesday’s game against Italy – found the back of the net again, it seemed like it could be the start of a comeback for the team.

Despite a number of good shots on goal by Norway, netminder Klaus Brzoska held them back throughout the period. The third period started with another strong penalty kill by Germany, but shortly before the time expired Norway’s Rolf Einar Pedersen scored, assisted by Emil Sorheim and Audun Bakke.

At 11.02 into the period, Germany received another penalty, but this time it took only 17 seconds for Norway to take advantage. Thomas Jacobsen scored with credits for the assists to Pallander Solberg and Morten Vaernes, and Germany seemed to lose focus. The final goal came from Bakke, with an assist from Stig Tore Svee, and the game ended with a 5-1 win to Norway.

With the conclusion of the second day's games, all three of the winning teams are on six points. Due to goal difference, Russia currently sit at the top of the table, with Italy and Norway both tied in second.

Full statistics and standings can be found here, where games are also being streamed live each day.

Full statistics and standings can be found here, where games are also being streamed live each day.