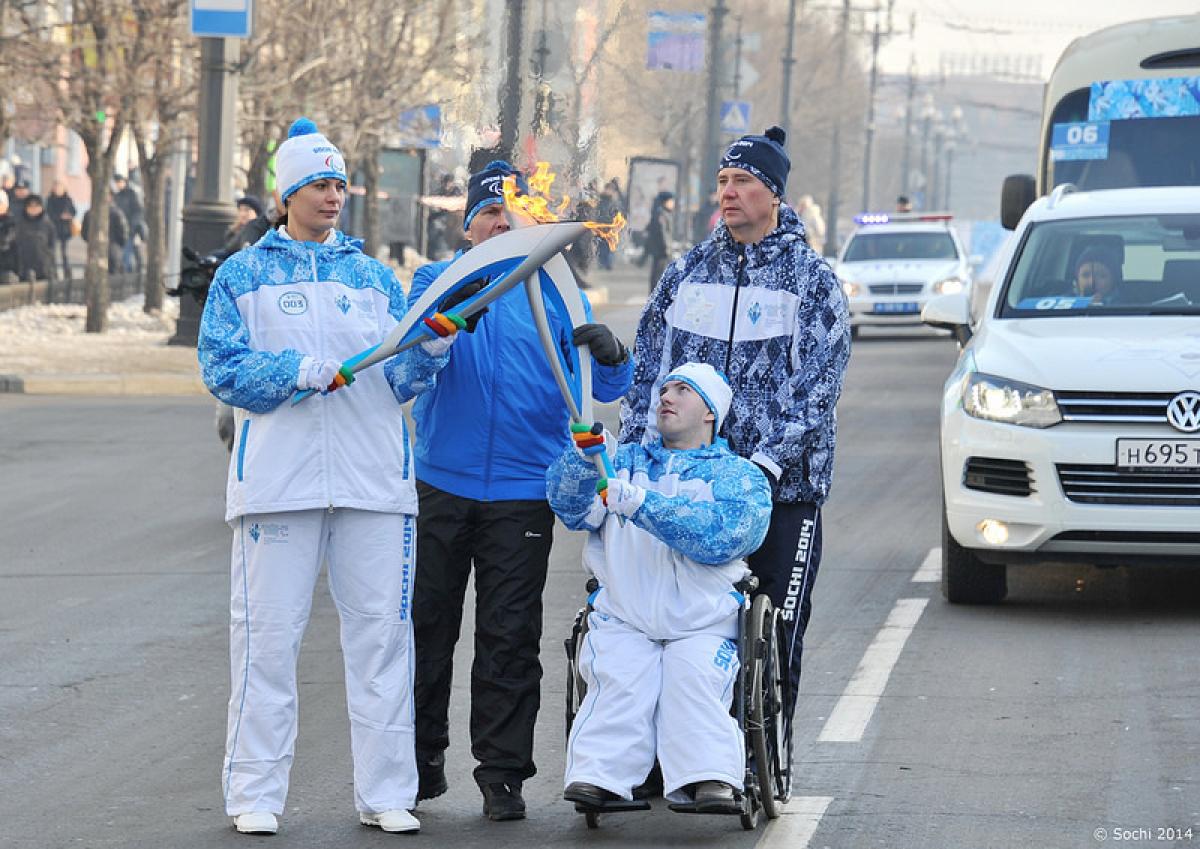 The Sochi 2014 Paralympic Torch relay will run through Wednesday (5 March), at which point a Paralympic Flame Lighting Ceremony will be held in Sochi in the Olympic Park.

The Sochi 2014 Paralympic Torch Relay travelled to cities of the northwestern Federal District of Russia on Sunday (2 March). Torchbearers lit and passed the Flame to each in seven cities: St. Petersburg, Arkhangelsk, Cherepovets, Kaliningrad, Murmansk and Petrozavodsk. Among the torchbearers of the Sochi 2014 Relay were the Presenting Partners nominees: Coca-Cola company, OSAO "Ingosstrakh", OAO "Russian Railways" and Volkswagen Group Rus.

In St. Petersburg, the flame of the Sochi 2014 Paralympics was lit on the Strelka of Vasilyevsky Island near the famous Rostral Columns. Sixty-four torchbearers took part in the Sochi 2014 Paralympic Torch Relay. They included Paralympic powerlifter Tatiana Smirnova, founder of the St. Petersburg wheelchair dance sports club "Dance on Wheels," Elena Lozko, co-founder of the "Coming Out" Foundation for Assistance Solving Autism in Russia, Lyubov Arkus, and Anton Kharitonov, a young man with autism whose personal history the country learned through documentary by Lyubov Arkus, "Anton's Right Here."

The vibrant completion of the Relay's city stage in St. Petersburg was the Paralympic Cauldron Lighting Ceremony. A festive concert was held on the stage of the sports complex featuring St. Petersburg collectives. The final torchbearer, London 2012 Paralympic champion Evgenii Shvetcov, lit the cauldron.

In Kaliningrad, 22 torchbearers took part in the Sochi 2014 Paralympic Torch Relay. They included curler Olga Yaroslavtseva, arm wrestler Alexander Akayev, powerlifter Alexey Larin, and the recipient of three Orders of the Red Star and a veteran of the Afghanistan war, Yuri Fedorischev. In anticipation of the start of the Torch Relay, the Flame was lit during a theatrical performance from the main asset of the Kaliningrad Region – an amber stone in the Amber Museum. The final celebration in Kaliningrad surprised spectators with a brilliant ice show by Olympic champion Artur Dmitriev, after which the cauldron was lit.

The Republic of Karelia met the Sochi 2014 Torch Relay in Petrozavodsk. Fifteen torchbearers passed the Flame to each other and ran along the historic district and waterfront of Lake Onega. Among the torchbearers were alpine skier Dmitry Zolin, Oleg Stepanov, member of the "Kamchatka 2013 Overcoming" expedition who conquered the volcano Gorely, and Semen Ksenyk, winner of three World Games.

The spark for the first Torch was produced by a glowing horseshoe forged by the hero of the epic "Kalevala," an Ilmarinen blacksmith. The cheerful completion of the procession was a final concert during which the cauldron was lit by Marina Krutysheva, winner of the Russian Championship in orienteering for people with a physical impairment.

In Arkhangelsk, 12 torchbearers were the main heroes of the Paralympic Torch Relay. They include: coach Vyacheslav Sadovnikov, participant in track and field marathons and all-Russian mass starts Natalia Alexeeva, coach and teacher at the Novodvinsk Home - a boarding school for children with severe intellectual development disabilities - Sergei Kirikovich, and Russian Championship winner and medalist in track and field for veterans Leonid Kazantsev. As part of the Lighting Ceremony, which reflected the genuine traditions and customs of Pomor, the Paralympic spark was produced from wood fungus. The final celebration of the city stage of the Relay took place on the set of a fabulous ice palace surrounded by ice sculptures. At the climax, the final torchbearer, London 2012 Paralympic Games champion Svetlana Sergeeva, lit the cauldron.

The Paralympic Torch Relay travelled to the city of Cherepovets in the Vologda Region. The Flame was lit during a theatrical performance from a forged Firebird feather made by master craftsmen in the old forge on Cathedral Hill. Among the 17 torchbearers in Cherepovets were the winner of the Deaflympics and European champion in football for hearing-impaired athletes Ruslan Seitkereev, winner of the world and European championship in goalball Anna Shevchenko, and chairman of the regional public organisation "All-Russian Society of the Disabled," Leonid Kryukov.

During the city celebration, audiences were entertained by performance groups, and the final torchbearer – London 2012 Paralympian Alexander Kurzin - lit the Cauldron at the event's climax.

In Murmansk, 17 torchbearers took part in the Sochi 2014 Paralympic Torch Relay. They included the coach of Valery Kolmykov, Spartakiade winner in cross-country skiing for people with disabilities, participant of military operations in Chechnya Mikhail Marshakov, and multiple winner and medalist in sports competitions at various levels, Sergei Sizyukhin. The Flame was lit by reindeer herders during a theatrical performance of a symbolic Northern Lights. Upon completion of the city stage of the Relay, torchbearer Larissa Ryabysheva lit the cauldron.

After extinguishing the cauldron, the ceremony of the transfer of sparks to Sochi was held. During this ceremony, the symbolic Fire was transferred to the host city of the Paralympic Games, as the Paralympic Flame Lighting Ceremony will be held in Sochi on Wednesday (5 March) in the Olympic Park. 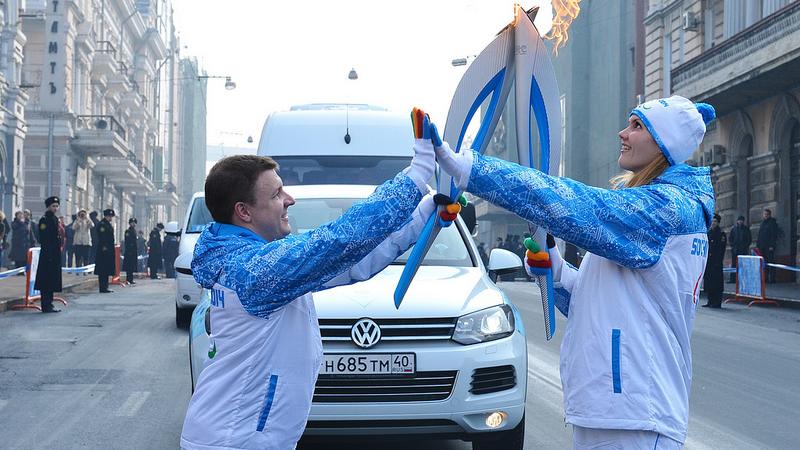