It has been a rough road to PyeongChang 2018 so far for South Korea’s Para ice hockey squad, but Seung-Hwan Jung wants to change that. 05 Feb 2017
Imagen 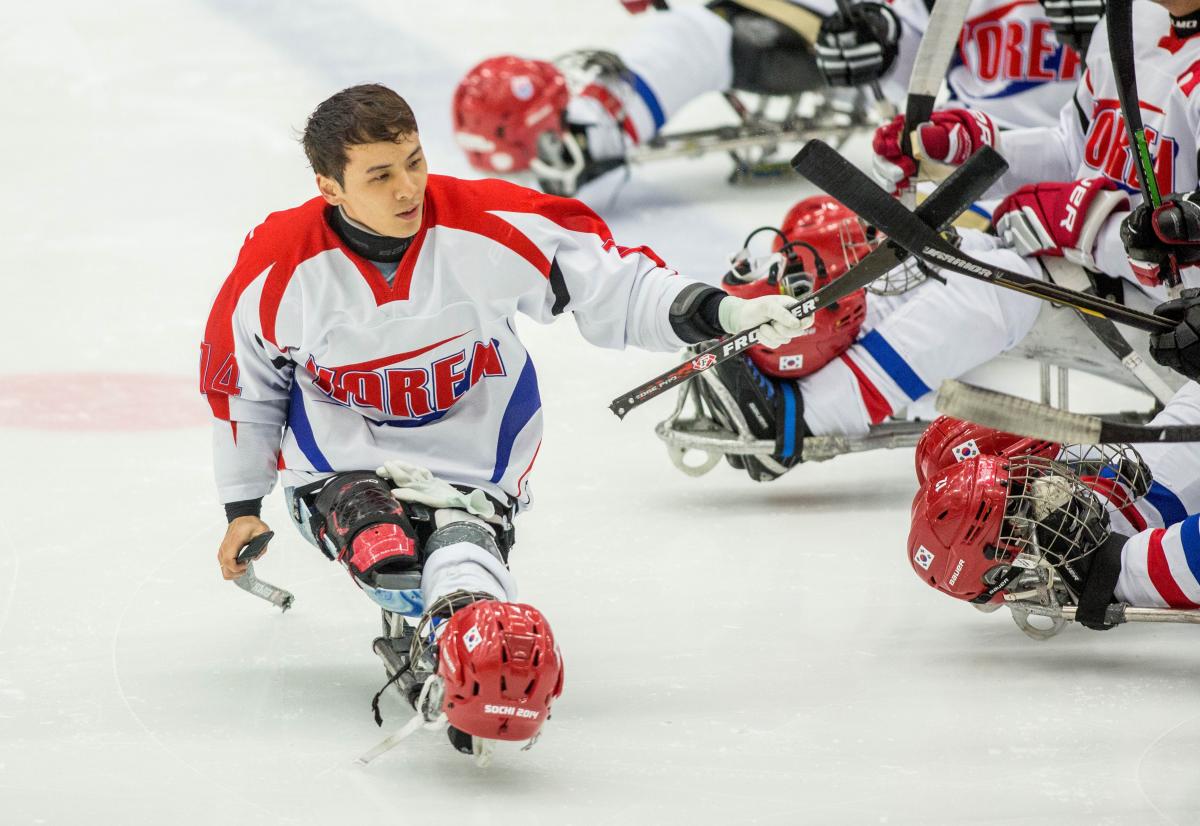 “Team Korea will try to win a medal not only at the World Championships, but also at the PyeongChang 2018 Paralympic Winter Games, which is our final goal.”

South Korea, the next Paralympic Winter Games host nation, has only reached the podium once in Para ice hockey at a Paralympics or World Championships A-Pool, and even that silver medal at the 2012 Worlds was a surprise.

The nation will be hosting the sport’s next World Championships – which will double as a Paralympic Test Event – from 11-20 April in Gangneung, and the pressure on the team will be higher than ever before to make programme history.

After a disappointing seventh-place finish at the Sochi 2014 Paralympics, the road to PyeongChang 2018 has been rattled thus far for South Korea.

The team has excelled at the B-Pool level, winning the 2015 World Championships with Seung-Hwan Jung being named Best Forward; but it has consistently faltered the last five years against top-tier A-Pool teams such as Canada and the USA.

The country did initiate a rookie programme, though, to develop the next generation of Para ice hockey players, with Ryu Ji Hyun, Choi Si Woo and Choi Kwang Hyouk having recently joined the national team after honing their development and showing remarkable growth.

Most recently, with a new coaching staff at the World Sledge Hockey Challenge in December 2016, South Korea lost all five of its games in what Jung deemed a “trial and error” tournament. Not a single South Korean skater cracked the top 10 for points, goals or assists at the four-team event.

A frustrated Jung led the South Korean charge with three points (one goal, two assists), and now, he is calling for change.

“Unfortunately, it is sad that we could not maintain our good pace due to a replacement of our coaching staff and generational shift of our team,” Jung said.

“Personally, I am not really satisfied with recent results of Team Korea, so I am trying to change my playing style for better results. In order to achieve satisfactory results like we had in the past, we need to be more unified in our teamwork and cooperation.”

A 13-year veteran of the national team, Jung, who lost his right leg at age five when water pipes at a construction site fell on him, has represented South Korea at two Paralympics. He was also his country’s Opening and Closing Ceremony flag bearer at the Sochi 2014 Paralympic Winter Games.

Jung has already helped his country raise awareness of Para ice hockey when it hosted the 2013 World Championships A-Pool in Goyang. It marked the first time an international competition in the sport was held in South Korea, and it was broadcast to the masses on KBS.

He is now serving as an honorary athlete ambassador for the PyeongChang 2018 Winter Paralympics, hoping to change perceptions by showing the South Korean public that Para ice hockey is a professional sport rather than just a rehabilitation sport.

Albeit small, Jung’s speed rivals that of any player in the world, including the USA’s Declan Farmer and Brody Roybal. But he said he still aspires to one day match his talents to those of good friend and rival Greg Westlake from Canada.

“As a player with small physique, I chose speed to convert my size disadvantage to an advantage,” Jung said.

“I thought that I needed fast and agile movements to compete with world-class players. However, at the same time, I try to read the flow of games and to be rhythmical and smart player rather than just a speedy player.”

In April, eight teams will compete in the 10,000 seat arena that has been purpose-built for PyeongChang 2018.

With a rookie development programme in place, a new coaching staff settling in and Jung taking the leadership reigns, expect the penalty minutes to decline for South Korea on its home ice, and the scoreboard to light up more often.

“As there is still a big gap between world top teams and our team, we have to work harder than ever,” Jung said. “Team Korea will try to win a medal not only at the World Championships, but also at the PyeongChang 2018 Paralympic Winter Games, which is our final goal.”