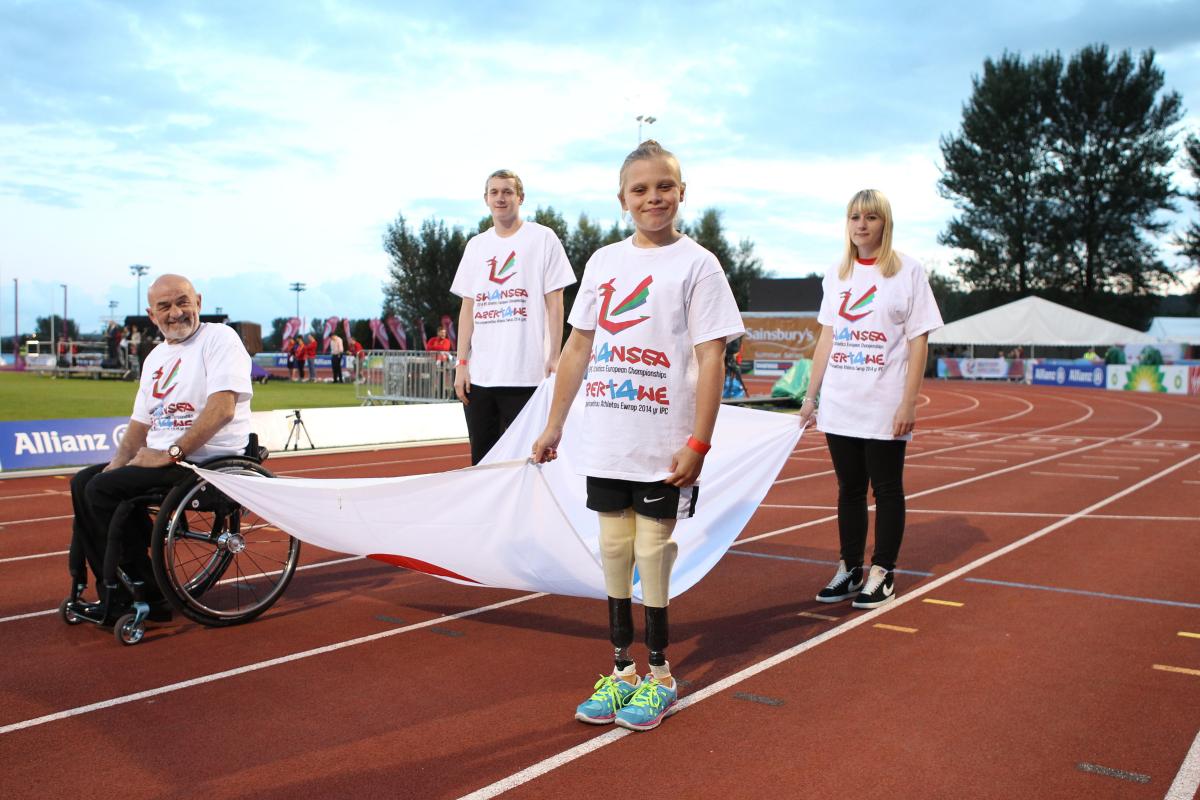 “As a result I am confident that not only will Swansea 2014 be the biggest, but also the best, IPC Athletics European Championships yet.”

From Samba bands to Welsh male choirs, Air Cadets to the city’s very own reality television stars - Swansea left no stone unturned in their quest to deliver an opening ceremony buzzing with excitement and anticipation.

The ceremony began with an impressive performance from the 215 City of Swansea Squadron RAF cadets who entertained the crowds before the all-male Morrison led Wales’ and Great Britain’s national anthems.

A stand packed with invited guests, VIPS, officials and dignitaries including John Griffith A.M. Minister for Natural resources, Culture & Sport in the Welsh Government, and The Lord Mayor of the City and County of Swansea Councillor Ceinwen Thomas then watched as the teams – representing over 550 athletes from 37 participating nations present in Swansea - were led down the track past a long line of cheering and waving volunteers.

“This event builds on the momentum of those fantastic London Games and I am sure that Swansea 2014 will help to raise the profile of para-sport and create further opportunities for sporting success for all,” he said.

“To deliver an event of this magnitude takes a monumental effort and the passion and teamwork that all partners have displayed since bidding for, and winning, this event has been nothing short of immense.

“As a result I am confident that not only will Swansea 2014 be the biggest, but also the best, IPC Athletics European Championships yet.”

Athletes and volunteers took their seats serenaded by Swansea teenager Shaheen Jafargholi, who rose to fame when he appeared on the national television show ‘Britain’s Got Talent’.

With the Championships declared officially open, the evening was rounded off with further musical displays, including a local stage school who enacted the work of Welsh poet Dylan Thomas and a jazzed up version of the Welsh National Anthem – Welsh diversity at its best.

The live stream from Swansea 2014, together with videos on demand of individual races, are available to embed on websites in some territories via the IPC’s YouTube channel www.youtube.com/paralympicsporttv. For further information please contact IPC Digital Media Manager Natalia Dannenberg-Spreier ([email protected]).

Athletics
Swansea 2014 - What to watch on Tuesday 19 August
Imagen

Athletics
Jason Smyth reclassified to T12 class ahead of Swansea 2014