Ten world records that have stood the test of time

Ahead of a busy summer of athletics, we look at the 10 long standing world records that may be beaten soon. 10 Jul 2015
Imagen 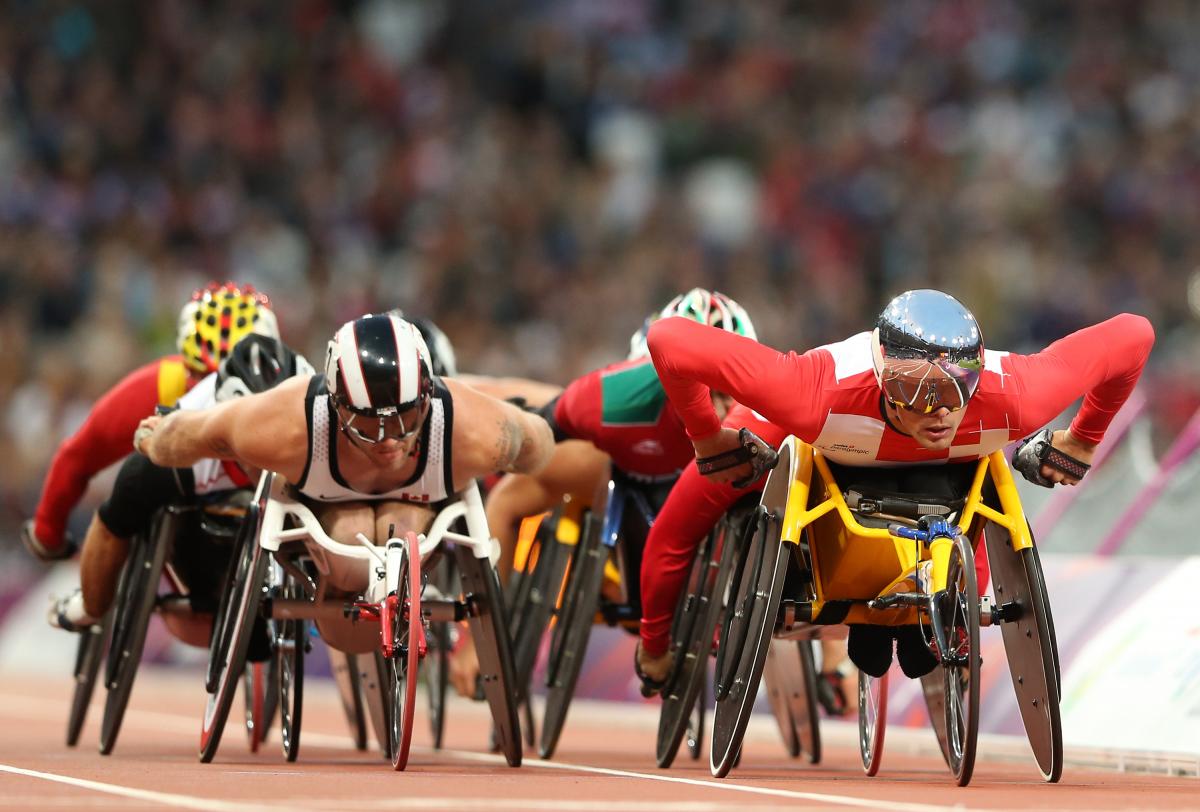 Marcel Hug of Switzerland and Josh Cassidy of Canada compete in the men's 5000m T54 heats on the second day of the London 2012 Paralympic Games.

World records are there to be broken – but some have stood the test of time more than others.

With the IPC Athletics World Championships taking place in Doha, Qatar, in just over three months’ time, here are 10 long-standing para-athletics world records that could finally come under threat:

Nigeria’s Ajibola Adeoye set the current world record back in 1992, when he clocked 10.72 seconds at a meeting in Barcelona, Spain. This year two athletes have run under 11 seconds – Poland’s world champion Michal Derus managed 10.84 at June’s Berlin Grand Prix in Germany, and Brazil’s Petrucio Ferreira dos Santos stole the show at April’s Sao Paulo Grand Prix in Brazil with 10.88 – having set a new Americas record of 10.81 last November. A head-to head battle in Doha could see the 23-year-old record fall.

Canada’s Brent Lakatos clinched three individual gold medals at the 2013 World Championships - each one in championship record time. The 100m T53 world record went his way a year later in Nottwil, Switzerland, but Chris Waddell’s 200m T53 world record of 25.24 set in 2004 has so far remained just out of reach. Lakatos tops the world rankings in 2015 with a best of 25.55. How much faster can he go?

Another world record set at the end of last century is the 400m T13. In 1999 Nigeria’s Adekunle Adesoji stopped the clock in a phenomenal 47.88. Namibia’s world champion Johannes Nambala tops the 2015 rankings with a best of 49.00; Russia’s European champion Egor Sharov lies second with 49.25. Watch out too for his compatriot Aleksei Labzin, who won Paralympic gold in 2012 in a time of 48.59.

Switzerland’s Marcel Hug has numerous titles and records to his name, including five gold medals from the last World Championships. The 29-year-old holds the T54 world records in the 800m, 1,500m, 5,000m and 10,000m – but the 400m world record still belongs to China’s Lixin Zhang – his time of 45.07 set at the Beijing 2008 Paralympic Games. With Germany’s world silver medallist Marc Schuh and the Netherlands’ European champion Kenny van Weeghel showing terrific form over one lap this year, could Zhang’s record be under threat?

Spain’s David Casinos has dominated the shot put F11 over recent years, winning gold at three consecutive Paralympic Games as well as four world titles. Casinos set the world record mark of 15.26m 15 years ago in Sydney, Australia. This year Russia’s Sergei Shatalov is the top of the rankings – a position Casinos has dominated in recent times. Could this be a sign of things to come?

The USA’s April Holmes clocked 12.98 in Atlanta back in 2006 to set a new world record; since then the likes of French Paralympic champion Marie-Amelie Le Fur and Germany’s Irmgard Bensusan have been chasing the 13 second mark to get within reach of Holmes’ time. It is proving a hard record to beat – even with the likes of T43 world record holder Marlou van Rhijn often in the line-up and leading the way across the line.

The world record for the women’s 200m T36 has stood for more than 10 years – China’s Fang Wang raced to Paralympic gold at the Athens Games in 2004, setting a new world record of 28.60 in the process. This year’s top three racers – Russia’s Elena Sviridova, Germany’s Claudia Nicoleitzik and Argentina’s Yanina Andrea Martinez have all run under 32 seconds, but can they find yet another gear to challenge Fang’s record?

Twenty years ago US sprinter Marla Runyan clocked 54.46 in Los Angeles, USA – a world record that still stands today. The Ukraine’s world champion Olena Gliebova set a new personal best of 56.76 when she took gold in Lyon, France. The 34-year-old currently tops the 2015 world rankings – can she improve on her personal best again at this year’s World Championships, and if so by how much?

Russia’s European silver medallist Zhanna Fekolina came tantalisingly close to the women’s long jump T37 world record when she leapt 4.86m in Berlin in June; just six centimetres shy of the mark set by Australian Lisa McIntosh in 2001. With the likes of another Australian, Jodi Elkington, as well as Germany’s Franziska Liebhardt also showing good form this year, the World Championships could provide the perfect stage to break that mark.

Jana Fesslova of the Czech Republic has held the women’s discus F54 world record since 2004, when she threw an amazing 19.96m. That mark has proved tough to beat, although China’s Liwan Yang looked in impressive form when she clinched gold at the Asian Para Games in South Korea last year, throwing 18.06m. Yang has continued that form in to 2015 and tops the world rankings after winning on home soil at the Beijing Grand Prix. She already holds the javelin world record – can she add another to her para-athletics cv?