Thousands turn out for National Paralympic Day in Britain 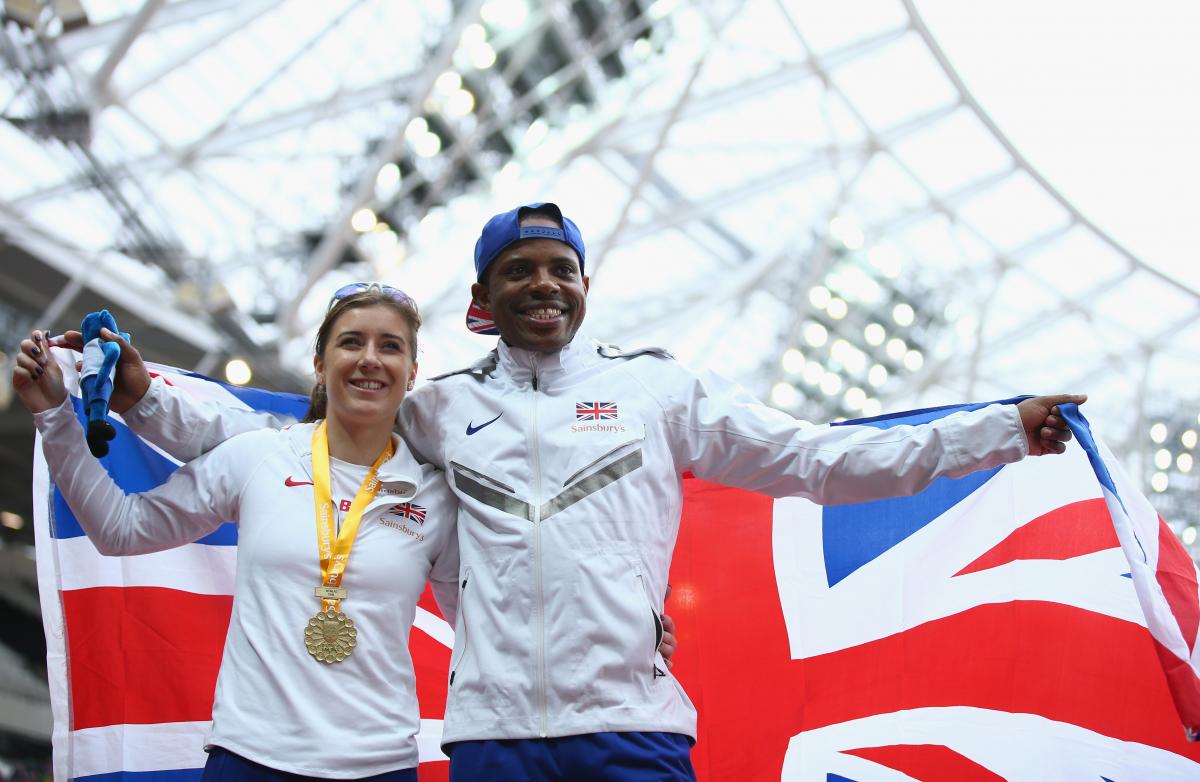 “It's been another great day of disability arts and sporting competition in Queen Elizabeth Olympic Park. We were all amazed and delighted by the success of London's Paralympic Games in 2012 and, three years on, it remains important that we continue to have high profile events like this to raise awareness and change attitudes, as well as celebrate the success of our Deaf and disabled artists and athletes.”

Some of Great Britain’s top Paralympic stars in the pool and on the track were victorious in competitions held as part of National Paralympic Day on Sunday 26 July in the British capital London.

Thousands braved the rain to turn out to Queen Elizabeth Olympic Park to the event which, as it also features the Mayor of London’s Liberty festival, is the UK’s largest annual celebration of Paralympic sport and disabled and Deaf arts.

The crowds refused to let the weather get in the way of their enthusiasm for the packed day of activity, as they tried out their choice of over 15 disability and inclusive sports from cycling to wheelchair dance and enjoyed the exciting performances of Deaf and disabled artists, musicians and performers at the Liberty Festival.

With just over a year to go to the 2016 Paralympic Games, visitors to the Park also had the opportunity to meet Paralympic medallists and Rio hopefuls including Natasha Baker and Sophie Christiansen from the sport of equestrian, Susie Rogers from swimming, Ali Jawad from powerlifting, wheelchair tennis player Louise Hunt and table tennis team trio Will Bayley, Aaron McKibbin and Ross Wilson.

Nearly 2,000 people filled the London Aquatics Centre to cheer on British Paralympians – hot off the recent World Championships in Glasgow - as they competed in an international showdown against the best para-swimmers from around the world.

Paralympic Champions Ellie Simmonds, Ollie Hynd and Jessica-Jane Applegate led an all-star line-up of GB swimmers which included a number of newly crowned World Champions, including Tully Kearney and Hannah Russell, as well as eight reigning European Champions, including Andrew Mullen, Stephanie Millward and James Crisp, who all competed in front of a packed crowd at the pool.

Simmonds, who was racing in the London Aquatics Centre for the first time since London 2012, was excited to be back in the pool in which she won two gold medals three years ago. The Paralympic Champion and national heroine said:

“It’s been an emotional day for me, being back and competing in this pool. Today is the first time I’ve been back since London and this place holds so many special memories for me from three years ago.

“I’ve had a fantastic day here, it’s been great fun to race in this pool again and I know there is so much going on out on the Park too, all as part of celebrations for National Paralympic Day. I had chance to take a quick look earlier and it looks just amazing. Hopefully when I’ve finished competing here I’ll have some time to look around everything that’s going on.”

Chief Executive of the British Paralympic Association, Tim Hollingsworth, said: “There has been so much going on today in celebration of National Paralympic Day, it’s been absolutely fantastic. Our para-swimmers put on a world-class performance this morning, it was great to have the partnership with the Sainsbury’s Anniversary Games, and all day we have had so many people test out the disability sports we have had on offer. To have so much on offer, alongside the truly incredible performances of the Liberty Festival, has made National Paralympic Day 2015 the best yet.”

Liberty, the leading disability and Deaf arts showcase, once again provided the cultural highlight of National Paralympic Day 2015. The crowds were clearly wowed by this year’s line-up of live music, theatrical spectacle, dance and comedy and the entertainment drew plenty of attention among the thousands in attendance.

The Mayor of London Boris Johnson said: “It's been another great day of disability arts and sporting competition in Queen Elizabeth Olympic Park. We were all amazed and delighted by the success of London's Paralympic Games in 2012 and, three years on, it remains important that we continue to have high profile events like this to raise awareness and change attitudes, as well as celebrate the success of our Deaf and disabled artists and athletes.”

Sunday’s events on the Park followed on from nationwide celebrations of National Paralympic Day over the weekend, including ‘pop-up’ events in Brighton, Nottingham and Plymouth and dozens of disability sport clubs holding open-days or come-and-try opportunities.

National Paralympic Day is made possible by the generous support of Spirit of 2012, a trust established by the Big Lottery Fund to recreate the spirit that radiated from the London 2012 Olympic and Paralympics. Spirit is committed to funding partners who help challenge perceptions of disability.

Debbie Lye, Spirit of 2012’s Chief Executive, said: “We support National Paralympic Day as a great opportunity for disabled athletes, volunteers and people to come together and celebrate. It has been a fantastic day of remarkable sport and a great day out for families to have a go at different sports and activities”.