The opening day of competition at the World Para Athletics Grand Prix saw two records set in the field and one on the track. 20 Mar 2017
Imagen 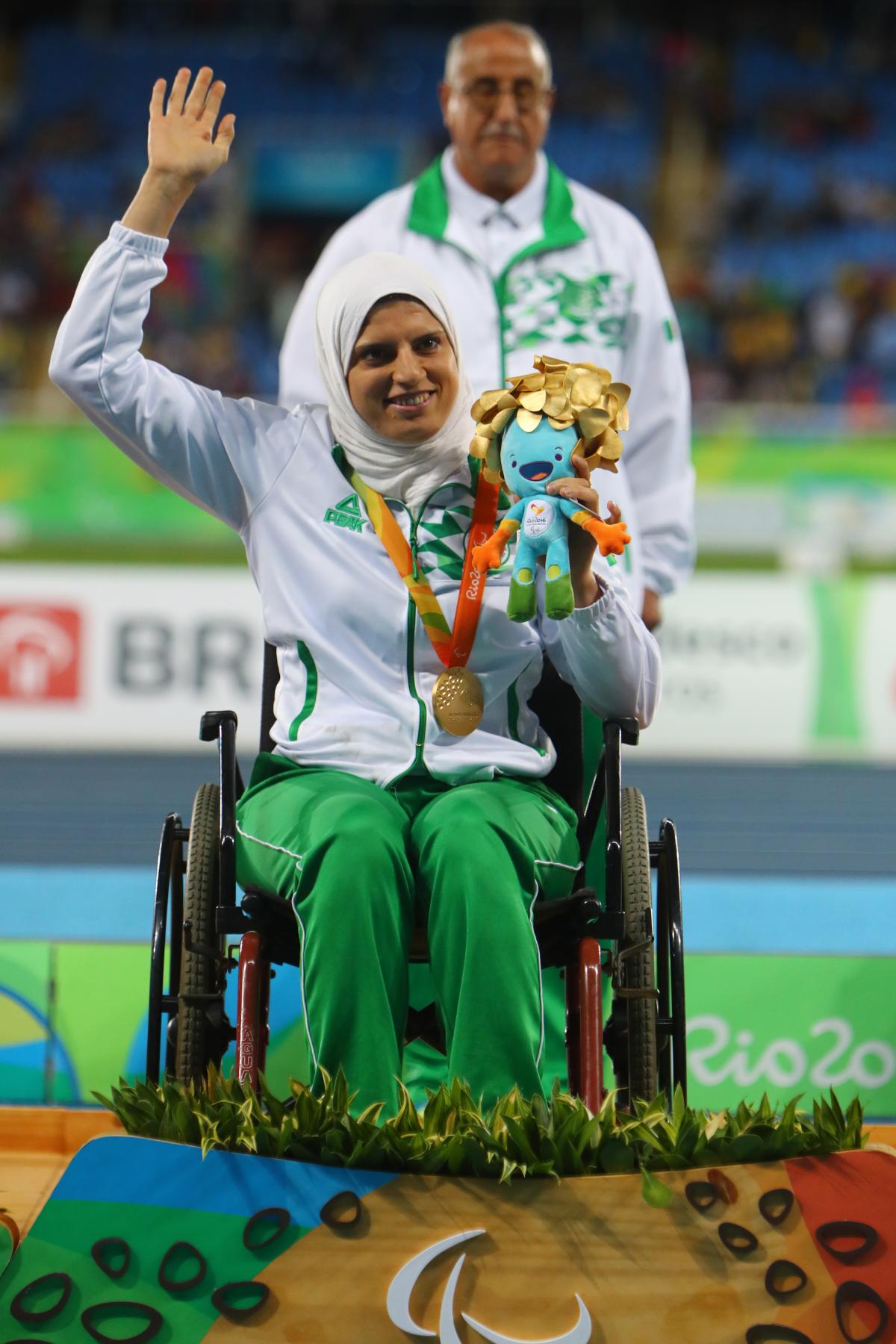 Gold medalist Asmahan Boudjadar of Algeria poses on the podium at the medal ceremony for women's shot put at Rio 2016.

Three world records fell on the opening day (Monday 20 March) of competition at the Dubai Grand Prix in the United Arab Emirates (UAE), kicking off the 2017 World Para Athletics season in fine style.

Algeria’s Paralympic shot put champion Asmahan Boudjadar set a new javelin F33 world record in Dubai 12 months ago and she did not disappoint this time either, adding a phenomenal 83cm to her previous javelin mark with her final throw of the day.

Boudjadar managed a massive 12.82m to take the win at the season-opening Grand Prix, the first in a series of nine taking place around the world this year in the build-up to July’s World Championships.

The hotly contested discus F33 was won by Saudi Arabia’s Hani Alnakhli, who added 1.53m on to the world record mark he set back in 2015.

The 31-year-old, who won Paralympic silver at London 2012, only managed to register one mark in Dubai but his 31.03m effort was more than good enough to take the win.

Kuwait’s Paralympic champion Ahmad Almutairi also got his season off to a flying start, smashing his own world record in the men’s 200m T33.

Namibia’s star sprinters Ananias Shikongo and Johannes Nambala also notched up wins at the Dubai Club for the Disabled track.

The host nation did come out on top in the men’s 200m T54 however, as Mohammad Vahdani clocked the fastest time. The UAE man stopped the clock at 25.40, getting the better of a stellar field including Swiss racer Marcel Hug (25.73).

In other 200m races, Saudi Arabia’s Mohammed Sharahili finished top of the T20 class with a time of 23.51, while Briton Shaun Burrows was the fastest of the T38 sprinters, clocking 23.76 in second place.

In the day’s other middle distance events, there was no surprise as local star Mohamed Hammadi took the win over two laps in the men’s T33/34/53 race. The Paralympic champion clocked 1:45.9 in the absence of reigning world champion Walid Ktila of Tunisia.

Out in the field, Algeria’s world silver medallist Lahouri Bahlaz came out on top in the men’s club throw F32. The 38-year-old’s sixth and final throw of 31.86m meant he finished more than three metres clear of the field as Great Britain’s Paralympic bronze medallist Stephen Miller settled for second place (28.82m).

India has proved a winning nation when it comes to the men’s javelin F46 event – Devendra won the Paralympic title last year – and this time it was the turn of Sundar Singh Gurjar, who threw a massive 60.33m to take the win more than 10m clear of the field. Kazakhstan’s Pavel Sidorchuk (F57) managed 30.58m to take first place in the javelin F34/57.

The second of four days of competition in the Middle East continues on Tuesday 21 March. Full results can be found at http://www.team-thomas.org/

The sport is governed by the IPC and co-ordinated by the World Para Athletics Sports Technical Committee, offering a wide range of competitions and events for male and female athletes in all impairment groups.