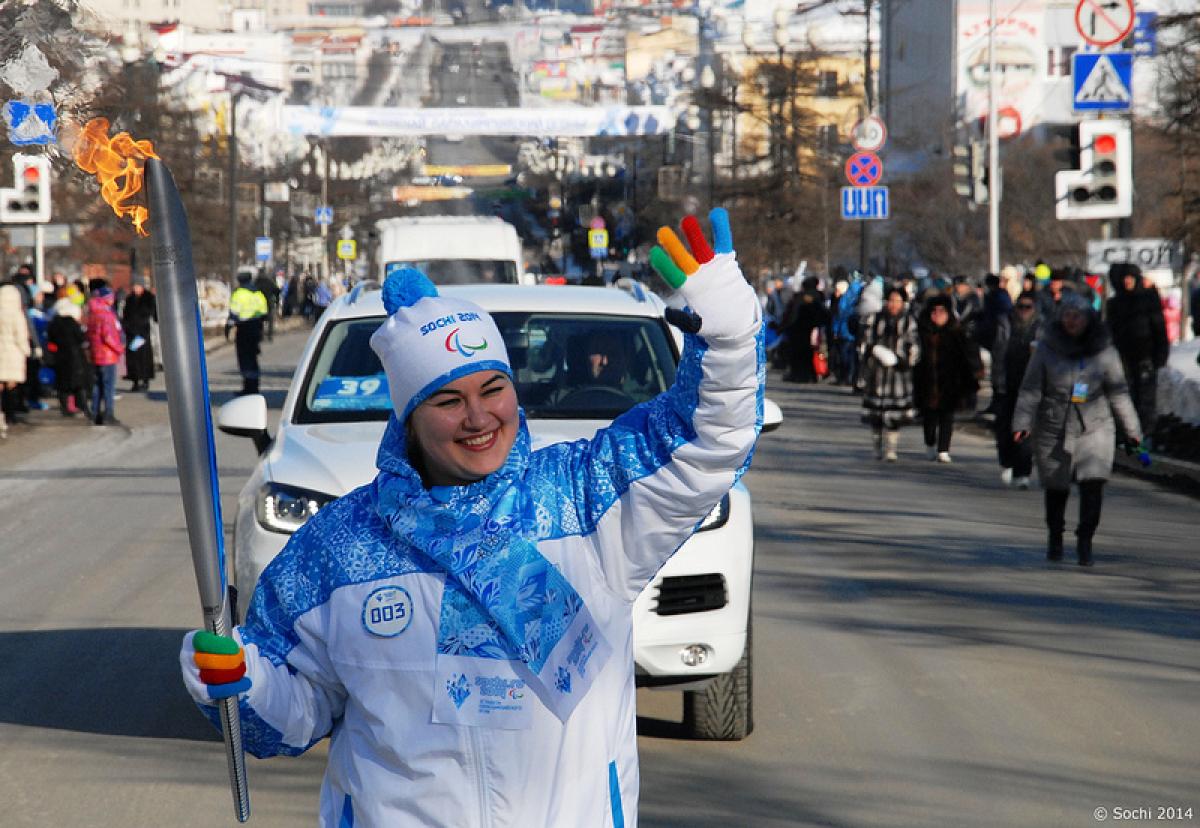 In Saratov, 100 Relay torchbearers marched with the Torch of the Sochi 2014 Paralympic Games.

In Saratov, 100 Relay torchbearers marched with the Torch of the Sochi 2014 Paralympic Games. Among them were the champion of the 2013 Deaflympics in swimming Ilya Trishkin, winner of the 2012 Paralympic Games in table tennis Angelika Kosacheva, multiple medallist of Russia in powerlifting Igor Vasilchuk and Andrey Fimin, as well as winner of six Paralympic medals in athletic,s Margarita Goncharova. The lighting of the Sochi 2014 Relay in Saratov was unique, as the spark for the first Torch was obtained during a "fire" dance. At the end of the Relay in Saratov, the cauldron was lit by Paralympic champion swimmer Denis Tarasov.

The Republic of Bashkortostan met the Paralympic Torch Relay in Ufa. During the flame lighting ceremony, a vibrant pageant based on a Bashkir epic unfolded, in which the flame of the Sochi 2014 Paralympics was lit. Among the 50 torchbearers in Ufa were Paralympic champion in London Mikhail Zimin, honored coach of Russia in athletics Petr Buylov, champion in Deaflympics swimming Vadim Borovik, and sports physician and physical training coach Oleg Bochkarev. During the final city celebration, the cauldron was lit on the stage by multiple medallist of Russia, winner of the European Judo Championships and Bashkir Republican Organization Chairman of the Russian Society for the Blind, Yury Akshentsov.

In Samara, the torchbearers at the Paralympic Torch Relay were 30 famous residents. Among them were athletes and coaches, and winners of all-Russian and international competitions, as well as European and world champions: four-time champion of Russia, winner of the World Cup, and member of the Russian Paralympic team of Russia Sergey Batukov, bronze medallist of the 2008 Paralympic Games, Natalia Dalekova, champions of the 2013 Deaflympics Sergey Dorkichev Roman Mafteutsa, Nikolay Dittenbir and Davronkhuzha Sharipov. At the culmination of the final celebration, Nikol Rodomakin, 2012 Paralympic champion, took the torch to the stage and lit the city cauldron.

In Nizhny Novgorod, a non-standard way of lighting the Paralympic Torch was selected, as the spark for the first torch was received from a laser beam as a result of photochemical synthesis, which emphasises not only the personality of the region, but also its significant scientific potential. Twenty-five torchbearers participated in the urban stage of the Relay, including: Paralympic champion football player Andrey Kuvaev, Paralympic champion in athletics Roman Kapranov Deaflympics Cup Champion Sergey Evstratenko, and European champion in athletics for hearing impaired athletes Vladislav Knyazev. The cauldron at the final city celebration was lit by London 2012 Paralympic champion Dmitry Kokarev.

After extinguishing the cauldrons in each of the four cities of the Volga Federal District, the transfer ceremony to Sochi took place, during which the host city of the Paralympic Games was passed the symbolic flame, where in Sochi on Wednesday (5 March), the Paralympic Flame Lighting Ceremony will take place at the main cauldron in the Olympic Park.