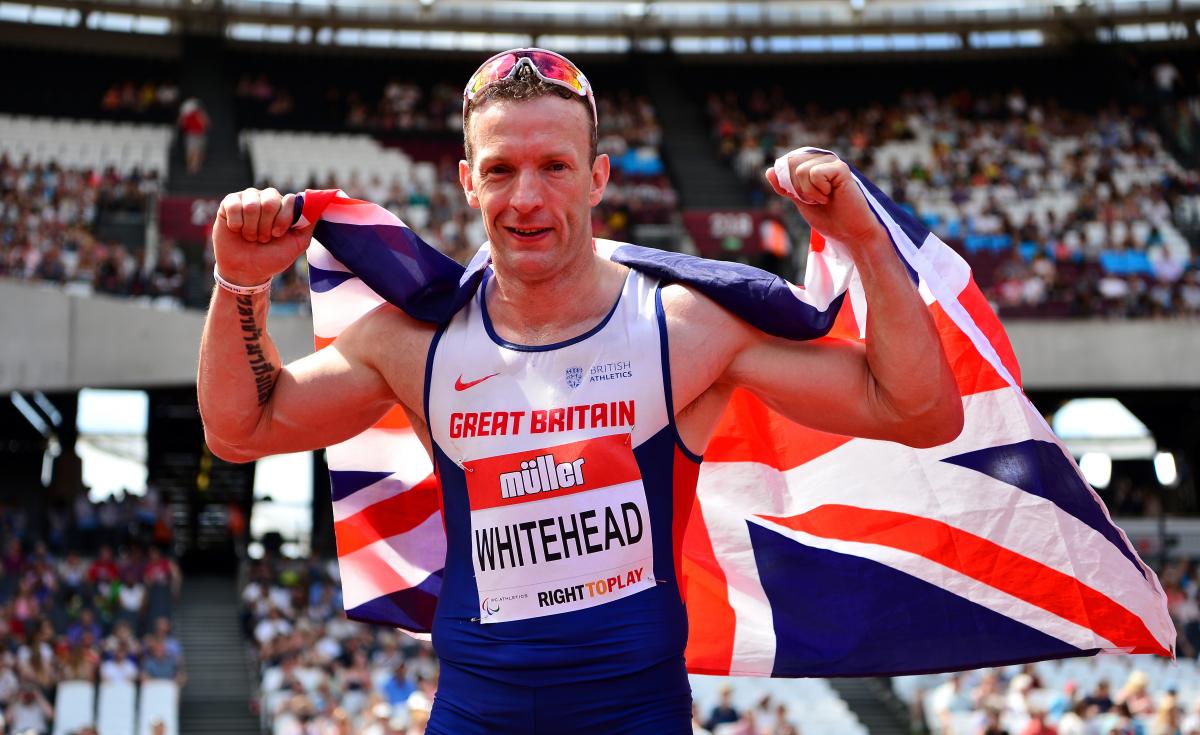 Two world records fell at the IPC Athletics Grand Prix Final in London, Great Britain, on Saturday (23 July) as home favourites Richard Whitehead and Libby Clegg both stormed in to the history books in the Queen Elizabeth Olympic Park.

Paralympic champion Whitehead smashed his own world record for the second time in two weeks to kick off a day of superb performances with many athletes competing for the final time before the Paralympic Games in Rio de Janeiro, Brazil, in less than eight weeks’ time.

Whitehead, who turned 40 just five days earlier, showed that age is no barrier and that he is undoubtedly the man to beat come Rio.

“It’s about holding the pace and not over-reaching in the race. However, it was key to get the winter training correct this year,” said the reigning World and European champion, who clocked 23.03 – nearly half a second better than his previous best.

“I’m heavy in training at the moment so 23.03 is fine. The goal is to go to Rio and put a solid 22 in. I still wanted to lower that world record today.”

Clegg – racing in only her third 200m ever with new guide Chris Clarke, and her first 200m with a blindfold, knocked a phenomenal 0.23 seconds off the 200m T11 world record set by Brazil’s Terezinha Guilhermina four years ago as she stormed to the line in 24.44.

“I’m absolutely gobsmacked at how I have performed, I can’t believe it. I have been getting better and better with every race and I’m loving every minute of it so far,” said Clegg, who was reclassified to the T11 class this month.

“I have got high hopes for Rio and am feeling really positive about it. I am aware that most of my competition are Brazilian but I think it’ll be really exciting and I can’t wait to get there.”

US number one Jarryd Wallace held off Paralympic champion Jonnie Peacock to take the win in the men’s 100m T44 in 10.80. With a world-class field lining up in London, the race gave a vital indication of form ahead of Rio 2016.

“It was good to be able to go up against a lot of good guys and be able to respond like that. The goal was to execute the race, there were one or two mistakes still in there.

“This is an amazing stadium to compete in, I have good memories from 2012 and 2013. The crowd brings a lot of good atmosphere,” said Wallace.

Dutch queen of the track Marlou van Rhijn (T43) sprinted home to win the women’s 100m T44 in 12.84. The double world champion came through in the final 50m after a quick start from British T44 sprinter Sophie Kamlish.

“I always feel so nervous running here and you always want to run your very best at this stadium so to run a time under 13 seconds close to my PB is a great feeling,” said van Rhijn.

“There are a lot of good starters in that race and it was pleasing for me to up my game against some strong competition. I feel like I am just getting in to my stride, I am really eager to run in Rio and it seems like the plan is coming together at the right time.”

World, Paralympic and European champion Hannah Cockroft sped out of the blocks to take a convincing win in the women’s 100m T34.

The 23-year-old quickly established an early lead despite admitting to a poor start. She proved too strong for her rivals as she crossed the line in 17.61, a new meeting record.

“It was good but I did mess up my start. The rest of the race technically felt great, so I am a little bit annoyed because I have been nailing it in training all week.

“I came into this race thinking I could smash that world record. I’ve been chasing it all season but it wasn’t to be today. I got the win, that’s the most important thing but I just can’t do that in Rio,” said Cockroft.

Poland’s reigning world and European champion Michal Derus held off 200m world champion Yohansson Nascimento of Brazil to take the win in the men’s 100m T47 with a season’s best 10.85.

Canada’s world champion Brent Lakatos powered home to win the men’s 100m T53 in a new meeting record 14.31, and there was a win too for South Africa’s Paralympic champion Fanie van der Merwe in the 100m T37, clocking 11.61.

Switzerland’s Marcel Hug enjoyed a confidence-boosting win in the men’s 1,500m T54, getting the better of a field including British Paralympic champion David Weir as he took the win in 3:19.73 after leading for much of the race.

“It was very important, if only for my own confidence. It is good to know that I am in good shape, as the Paralympic Games will be a completely different race,” said Hug.

Victory in the women’s 1,500m T54 went to Switzerland’s 2014 European champion Manuela Schar. The 31-year-old took to the front with 300m remaining, and held off her teammate Catherine Debrunner to take the win in 3:39.15.

Out in the field there were wins for Paralympic, world and European long jump T44 champion Markus Rehm (7.96m), while US world silver medallist David Blair won the men’s discus F43/44 with 63.44m, just 20 centimetres short of the world record mark he set in May. Great Britain’s world champion Jo Butterfield won the women’s club throw F32/51 with a meeting record 22.02m.