After being told she would never race again, the 35-year-old Paralympic champion broke the 16-year-old European record. 17 May 2014
Imagen 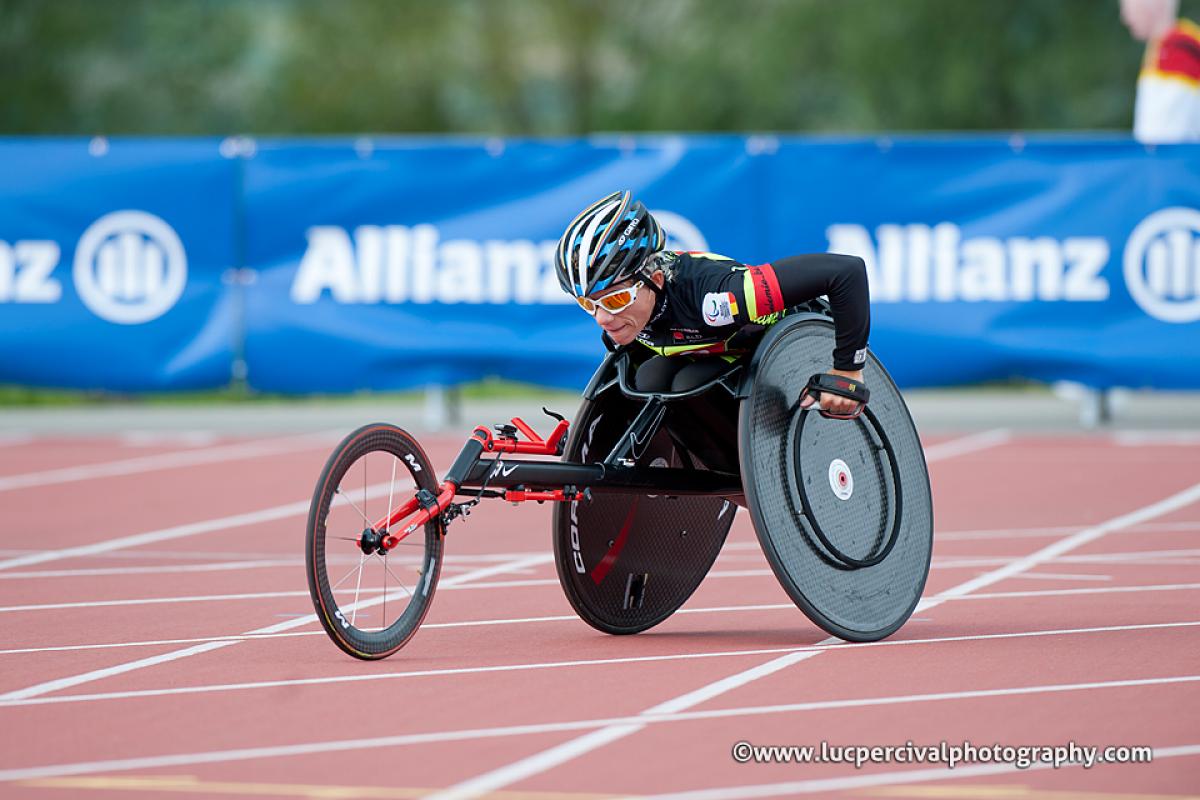 Belgium's Marieke Vervoort was in great form in her comeback in Nottwil after four months out injured.

“I want to call my doctor who told me I’d never reach the top again. I have shown that if you really want something, you can get it. Never give up, just do it!"

After spending four months in hospital after a racing crash at the 2013 IPC Athletics World Championships, Belgium’s Marieke Vervoort capped a memorable comeback weekend with a European record in the women’s 800m T52 at the IPC Athletics Grand Prix in Nottwil, Switzerland on Saturday (17 May).

Racing the 800m for the first time since her crash, the 35-year old put in a stunning solo performance to clock 2:25.23 and lower the previous European record, set in July 1998 by Switzerland’s Ursina Greuter, by 2.36 seconds.

“I was scared to do the 800m again as this was the race I had my accident in last year in Lyon. Today I was glad to race alone,” said Vervoort who was told by doctors she would never compete at the highest level again.

“I didn’t feel too well this morning, I had sore arms, but with my iron mind I stayed on my goal. I pushed as hard as I could.

“I want to call my doctor who told me I’d never reach the top again. I have shown that if you really want something, you can get it. Never give up, just do it!

“I’m really, really happy. To be here is a gift. I’m really emotional.”

After a slow opening lap, Canada’s Alexandre Dupont upped the pace after the bell however by 600m it was a two horse race between Hug and Weir. Home favourite Hug (1:38.22) came out on top, edging out Weir (1:38.39) for the second time in 24 hours following yesterday’s 10,000m win for the ‘Swiss Silver Bullet’.

“I just tried to keep in lane two,” said Hug who will race Weir again over 1,500m this afternoon. “I knew David was attacking, but I had the highest speed and managed to keep him out into the outside lane.

“I will try and make it a hat-trick of wins this afternoon but I know it will be difficult.”

The women’s 800m T34 provided a thrilling finish with Great Britain’s world record holder Hannah Cockroft timing her finish to perfection. Sitting third with 200m to go, behind teammate Melissa Nichols and leader Rosemary Little of Australia, 21-year-old Cockroft (2:14.33) powered through the field to catch Little (2:14.54), who at one point had a 15m lead, on the line.

“I was so focussed on dealing with the wind on the back straight that I actually didn’t realise we only had 200m to go, so I panicked a little bit. Once I got my rhythm going I felt good. Angela has a good sprint, so it’s always hard against her in the finishing straight.

“This is great preparation for the Commonwealth Games in Glasgow this summer where I’ll be racing the 1,500m.”

World silver medallist and home favourite Manuela Schar (1:58.58) led from start to finish, but had to hold off a late challenge from Canada’s Diane Roy (1:58.70) to claim victory in the women’s 800m T54. Great Britain’s Jade Jones (1:59.35), who was second, throughout had to settle for third.

After a shock loss to Finland’s Henry Manni in Friday’s 200m T34, Tunisia’s Walid Ktila was back to winning ways in the 800m T34. Leading at the bell, Ktila (1:48.46) and Manni (1:48.64) pushed each other to the limits during the last lap and it was the four-time world and two-time Paralympic champion who came out on top.

It was a Canadian one-two finish in the men’s 800m T53 with world silver medallist in this event Brent Lakatos (1:47.33) proving too strong for his teammate Jean-Philippe Maranda (1:47.98).

The IPC Athletics Grand Prix in Nottwil is supported by international partner Allianz.

Competition will continue at the IPC Athletics Grand Prix in Nottwil until Sunday 18 May and Saturday evening's session will start at 14:25. For the latest results, please click here.