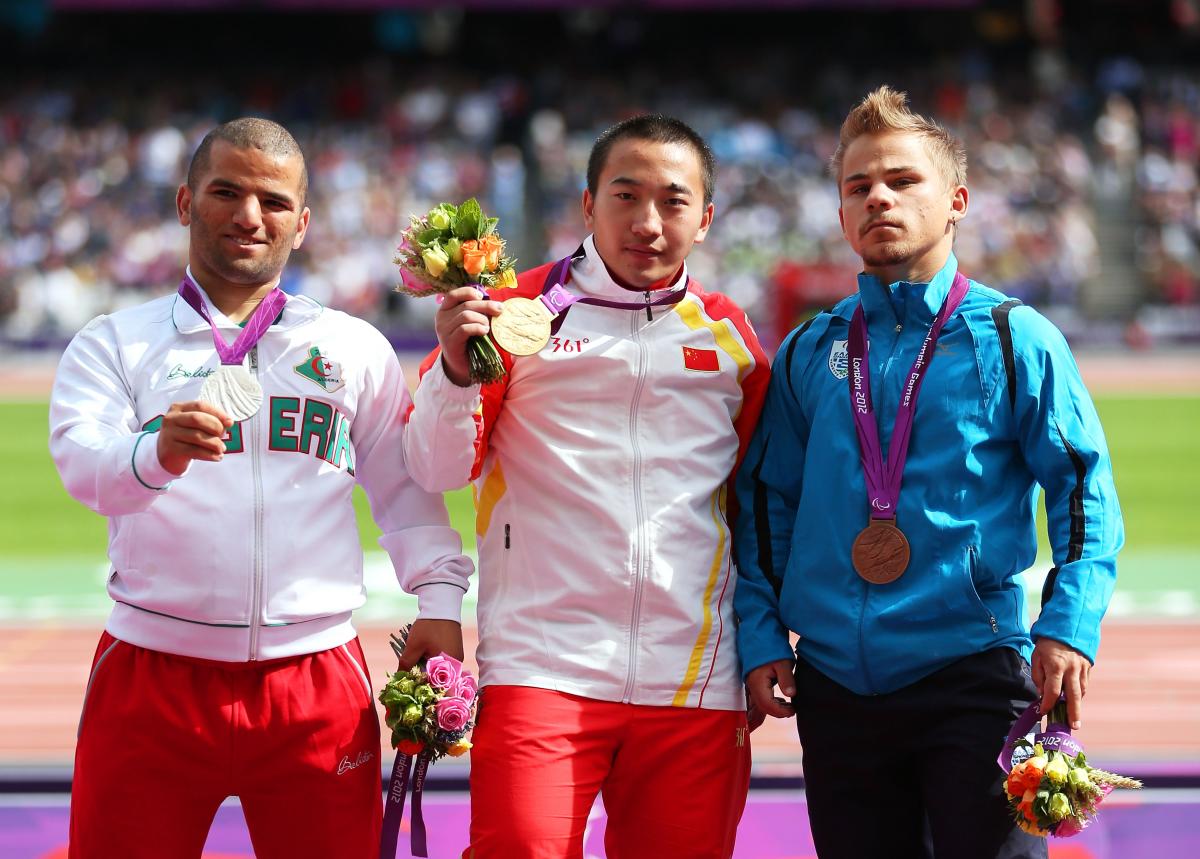 "It's so exciting. I used to dream about that but I didn't think this would become true.”

China’s Zhiming Wang completed a hat trick of gold medals in the field events as he adds to his collection in the men’s javelin F40 final on Friday morning (7 September).

The 20-year-old has taken the London 2012 Paralympic Games by storm and today has broken his third world record when he threw a distance of 47.95m with his last throw to beat distances achieved earlier by world champion Ahmed Naas of Iraq.

Speaking after the event, Wang said: "It's so exciting. I used to dream about that but I didn't think this would become true.”

Naas had to settle with second place and a silver medal with teammate Wildan Nukhailawi taking bronze.

Ukraine’s Oksana Zubkovska leaped to the top of the podium in the women’s long jump F11/12 final with a world record distance of 6.60m. Having already secured the gold medal with an earlier jump, Zubkovska signalled for the crowd to cheer instead of observing their usual silence as she went for her final attempt, resulting in her best distance.

"After my first attempt, I thought that perhaps the Chinese athlete (JIA Juntingxian) would be my biggest danger,” said Zubkovska. “But on the second jump I hit 6.41m, a new record, and I knew then that I was OK. I knew then that I could win."

"I really wanted to beat my world record but I did not think I would break it by as much. I thought 6.41m was my best ever and then I did more. It is colossal. I have to give credit to the crowd. The emotions coming from the public were great.”

Still recovering from the ParalympicsGB gold medal rush from Thursday evening, the crowd had some more medal joy in the women’s discus F51/52/53 with Josie Pearson. After initially competing in wheelchair rugby at the 2008 Beijing Games, she has now found her niche on the Athletics field and is rewarded with a gold medal and a 6.58m world record.

Yanlong Fu receives his first Paralympic medal as he wins the men’s javelin throw F42 and records a world record at the same time. He threw a distance of 52.79m to fend off competition from silver medallist Kamran Shokrisalari of Iran and bronze medallist Runar Steinstad of Norway. Also involved in the final was Josue Cajuste of Haiti who recently had his classification reassessed and competed in the final after being fitted with a new prosthetic leg just two days before. Cajuste finished in 11th place but in the eyes of the crowd it was first place for determination and endeavour.

The penultimate day of Athletics in the Olympic Stadium was off to a flying start with the heats of the men’s 100m T42 event. The 200m gold medal winner Richard Whitehead was back to entertain the home crowd and celebrated his progression to the final after coming third in the first heat. Germany’s Heinrich Popow set a new European record to finish as the fastest qualifier just ahead of Scott Reardon of Australia.

Aussie sprint sensation Evan O’Hanlon eased his way into the men’s 200m T38 final after comfortably crossing the line whilst keeping an eye on his competition during the last 50m. The 100m gold medallist is joined by South Africa’s Dyan Buis and China’s Zhou Wenjun, who received silver and bronze medals behind O’Hanlon in the 100m.

In the men’s 200m T12 heats, Poland’s Mateusz Michalski ran a seasonal best to finish as the quickest qualifier, just ahead of Yansong Li and Yuqing Yang, both of China. Reaching the men’s 100m T11 final with the fastest qualifying time was Lei Xue of China, closely followed by Felipe Gomes of Brazil.

Huzhao Li of China qualified in the top spot for the men’s 200m T53 with a new Paralympic record of 26.08 to narrowly beat teammate Shiran Yu.

In the men’s 800m T13 heats, David Korir of Kenya maintained his quick pace to set a new Paralympic world record of 1:54.56 and head to the final as the quickest qualifier.