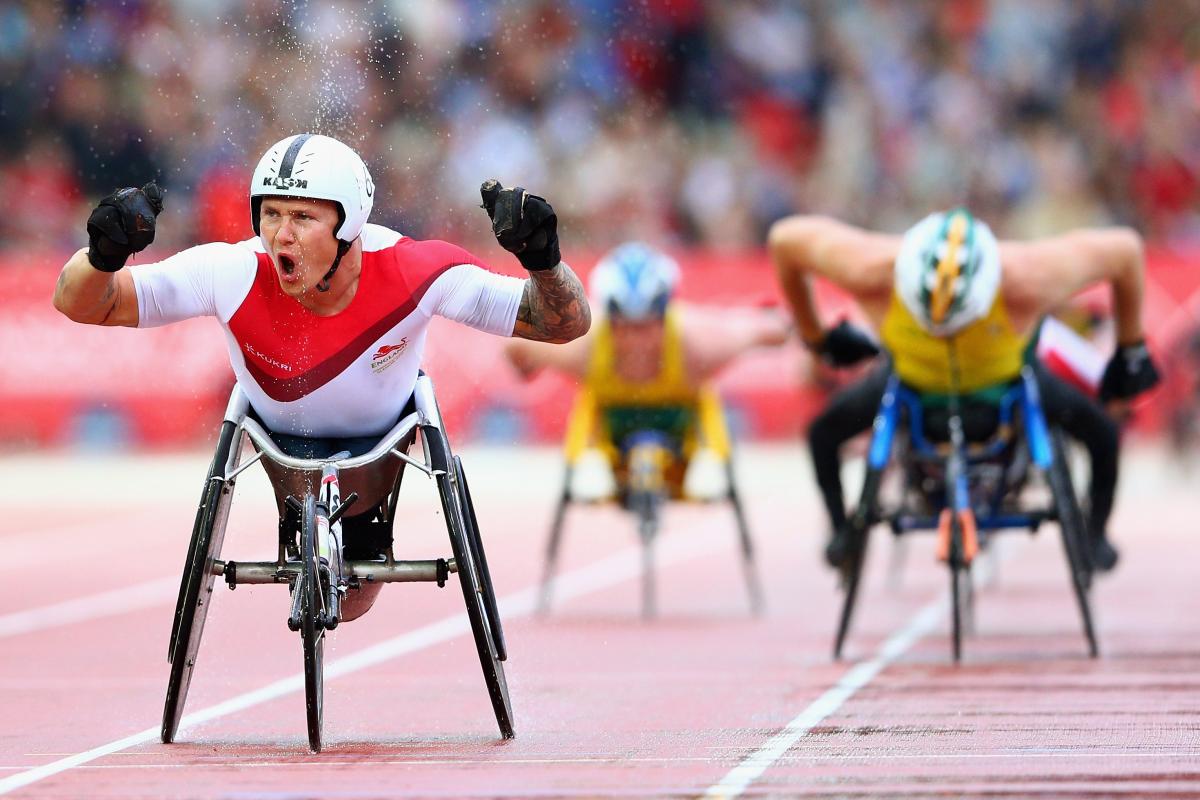 David Weir of England crosses the line to win gold in the men's 1,500m T54 final at the Glasgow 2014 Commonwealth Games

"This medal is special because it wasn't on my list until now. It means a lot to me to represent England and I am passionate about my country."

England’s six-time Paralympic champion David Weir has added a Commonwealth gold to his growing collection, stealing victory on the back straight in the men’s 1,500m T54 at Glasgow 2014.

But there was little Fearnley could do as Weir powered to the lead and pulled away to finish in 3:21.67 at the Hampden Park Stadium.

Speaking to BBC Sport, Weir said "This medal is special because it wasn't on my list until now. It means a lot to me to represent England and I am passionate about my country.

"This is why I carried on after 2012. It felt like London out there with so many English flags and it has been great.

Weir, who returned in 2014 after taking a break after London 2012, is gearing up for the 2014 IPC Athletics European Championships in Swansea, Great Britain, from 18-23 August.

In the women’s event, Angie Ballard (3:59.20) won her first Commonwealth medal to add to Australia’s second place in the medals table.

Speaking to the Australian Paralympic Committee, Ballard stated that the heavy rain was influential as she picked off the field.

She said: “It worked out perfectly for me. Midway through the race I was boxed in and I didn’t think that was a great part of the plan.

“I didn’t intend that to happen, but because of the wet weather and the varying degrees which people push well, it worked for me because it spread the field out and I was no longer boxed and was able to come around.

“I push well in both so that’s a strength for me. So I could really start to discount them once it starts to rain.”

Later, there was an emotional moment during the medal ceremony as Jones’ coach Baroness Tanni Grey-Thompson awarded her protege her first Commonwealth, and senior, medal.

In the lawn bowls, South Africa beat New Zealand to gold, and there was bronze for England, as they beat hosts Scotland.

The next para-sport event due to take place at Glasgow 2014 is powerlifting on Saturday (2 August) at the Clyde Auditorium.

The 2014 IPC Athletics European Championships will feature around 560 athletes from 39 countries and takes place at the Swansea University Sports Village.

Tickets for the event are now on-sale and can be purchased via the Swansea ticket website. Prices start from £3 per session.