In a night to remember at Olympic Stadium, Great Britain’s David Weir snuck into gold-medal position at the end of the 5,000m T54 event. 03 Sep 2012
Imagen 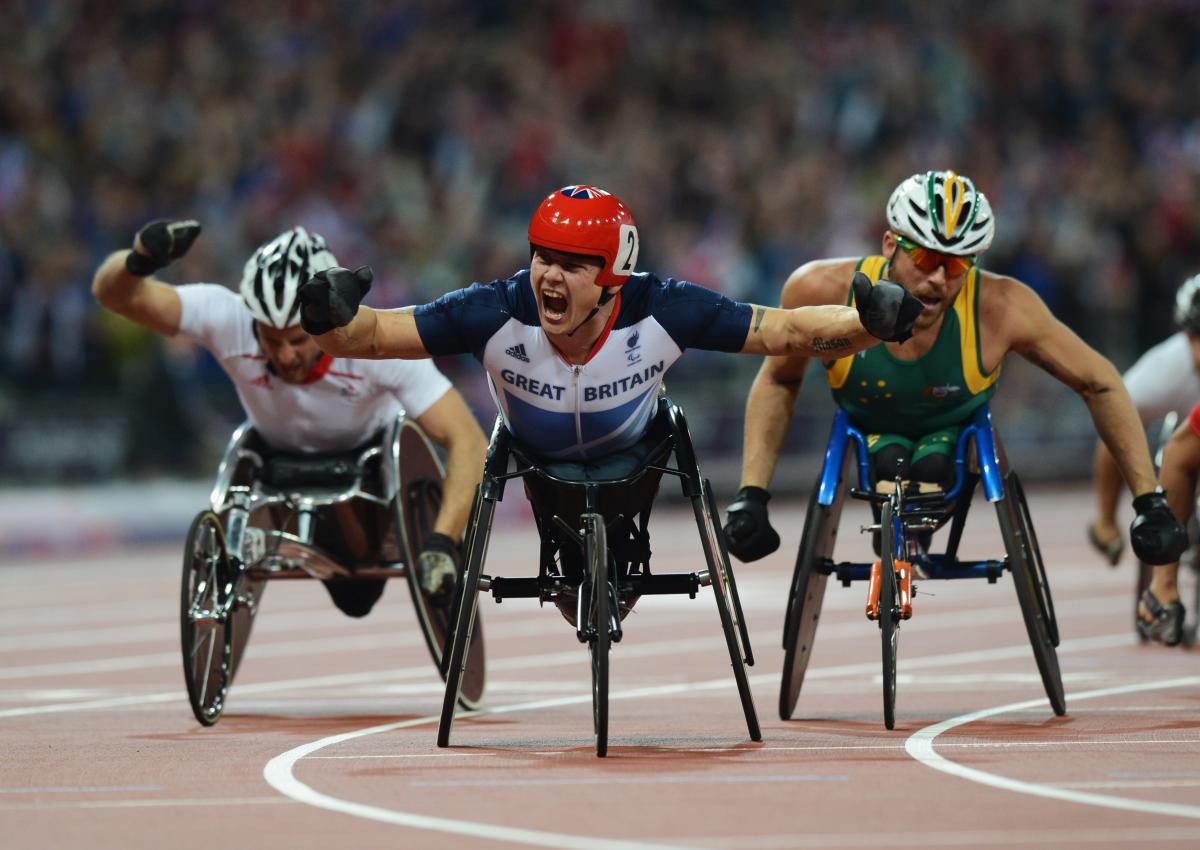 “It's indescribable what it does to you,” Weir said of the thundering crowd.

The final event on the track on Sunday evening (2 September) proved to be well worth the wait for the home crowds.

World 5,000m T54 champion David Weir looked in a great position as he came off the bend with 100m remaining, and sure enough, as the crowds went wild he pushed on strongly to cross the line in first place, with Kurt Fearnley of Australia repeating his silver medal success in Beijing.

"It's a great finish. We're the two oldest in the field. And for him to get silver, it's great to see the old dogs still winning,” Weir said of his one-two finish with Fearnley.

Weir won bronze in the event at Beijing 2008 and the gold at the 2011 IPC Athletics World Championships in Christchurch, New Zealand, but a gold medal in the British capital in front of 80,000 fans screaming him on is more priceless than anything.

“It's indescribable what it does to you,” Weir said of the thundering crowd.

"In the last three laps you don't think of anything. You just want to tail that fastest person. Someone made a mistake in that race. I just jumped at the chance to hook on.”

Elsewhere on the night, Brazilian Alan Fonteles Cardoso Oliviera upset the formbook in the final of the men’s 200m T44, taking gold ahead of the 2008 champion Oscar Pistorius. All eyes were on the South African as he led off the bend, but it was 20-year-old Oliviera who powered through the field in the final 100m to victory.

“Only my family, my friends, people next to me know what I've been through for being away from my family, training in Sao Paulo,” he said. “Being here representing Brazil, I'm very happy.”

Marie-Amelie Le Fur added to the long jump bronze she won this morning with gold in the 100m T44. The French world champion battled hard to stave off her rivals, falling as she dipped over the line. But she quickly leapt up with screams of joy when she saw the scoreboard. Marlou van Rhijn took silver ahead of 2008 Paralympic champion April Holmes.

In the women’s 200m T11 final, world and Paralympic champion Terezinha Guilhermina underlined her supremacy in the T11 sprint events as she dominated the field from start to finish, crossing the line with a new Paralympic record time of 24.82.

“I’m very happy,” said the Brazilian. “I’m thankful to God for this opportunity to be in first place again and with such an impressive result.”

There was another gold on the track for Brazil, this time going to Yohansson Nascimento in the men’s 200m T46. The 24-year-old clocked a T45 world record 22.05.

Finnish track star Leo Pekka Tahti won his third successive Paralympic 100m T54 crown in terrific style, powering away at the gun to maintain his unbeaten run of races in 2012.

The 29-year-old, who also won the 200m T54 in Athens, said: “This is my fourth Paralympic Games win so it feels very wonderful. In the first 50m I was very strong, in the last 50m I wasn’t so strong, but anyway I won and that is the most important thing.”

Defending 100m T53 champion Huang Lisha enjoyed a convincing victory in the women’s 100m T53, starting strongly and quickly pulling away from the rest of the field to take gold in 16.42.

There was a star-studded line-up in the men’s 100m T36, but it was Evgenii Shvetcov of Russia who took the top spot, bettering the Paralympic record he set in the morning’s heats with a time of 12.08. There were cheers from the crowd for Britain’s Graeme Ballard who took silver, whilst bronze went to the 2008 champion Roman Pavlyk.

The USA’s Raymond Martin won the men’s 100m T52 in impressive style, and world champion Li Huzhao bettered the silver he won in Beijing with a gold medal in the men’s 400m T53. And it was a Russian one-two in the men’s 400m T13 final, as Alexey Labzin took gold ahead of his countryman Alexander Zverev clocking 48.59, a new Paralympic record.

China’s world champion Gao Mingjie held on to the title he won four years ago as he set a new Paralympic record on his way to winning gold in the javelin F44.

19-year-old Nikol Rodomakina added to the World Championship gold she won last year with victory in the long jump F46. Australian world record holder Carlee Beattie, second in New Zealand, had to make do with silver once again.

In the men’s discus F11 David Casino claimed gold with a winning throw of 38.41m, adding to the world title he won last year. Silver went to the man who finished behind the Spaniard at the World Championships in New Zealand, 48-year-old Vasyl Lishchynskyi.