Weir does it again on track 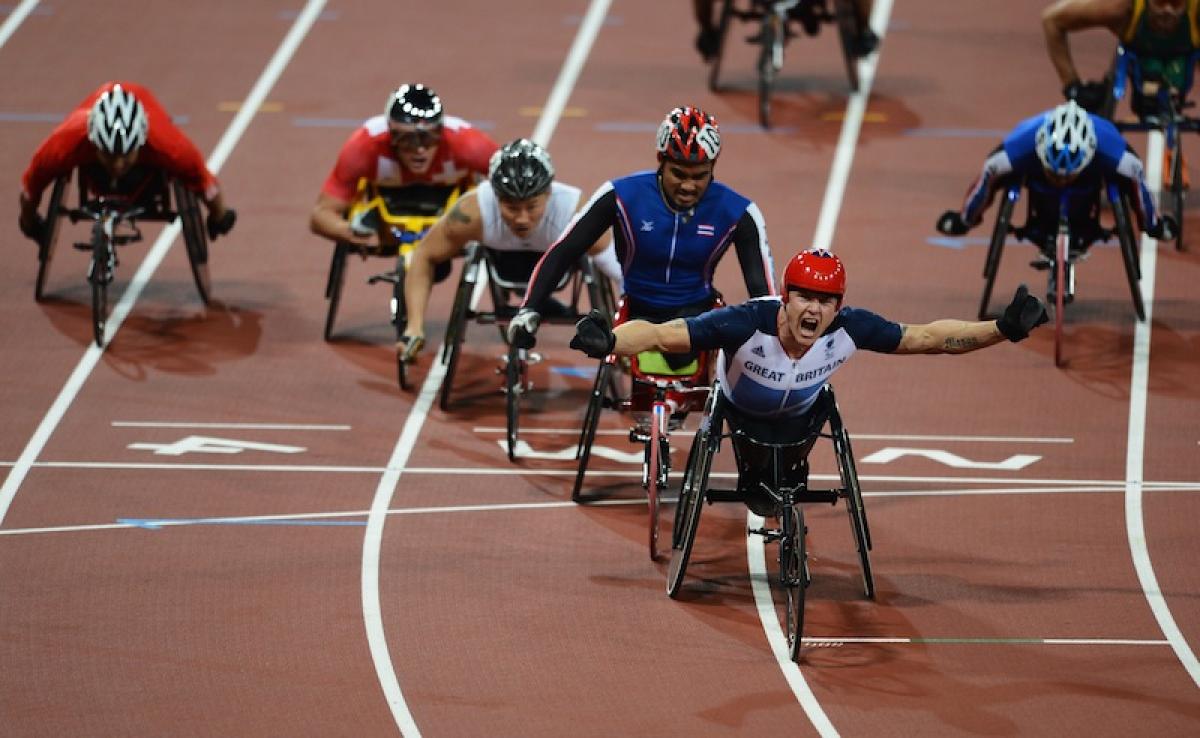 “In the last 400m I was just thinking of winning.”

Great Britain’s David Weir brought the crowds in Olympic Stadium to their feet once more as he took his second gold of the London Games with a thrilling victory in the men’s 1,500 T54 on Tuesday evening.

The 33-year-old world champion went to the front with 400m remaining and held on strongly to cross the line in a time of 3:12.09, with Prawat Wahoram taking silver and Kim Gyu Dae the bronze.

Weir, who also won the title four years ago in Beijing, was roared on by the home crowd as he sped round the final lap.

“In the last 400m I was just thinking of winning,” he said afterwards. “I’m very proud. I’m shocked really because the field in the 1,500m this year has been so strong and I’ve only won a couple of races, so coming into this race I was probably the fourth fastest on paper. But the training I’ve done, I knew I had lots of top speed.”

There were plenty of other middle distance medals decided on the track too. Abderrahim Zhiou stormed home to set a new world record of 3:48.31 in the men’s 1500m T13 final. Kenya’s David Korir led from the start but couldn’t match the Tunisian’s sprint finish, crossing the line in second place ahead of Britain’s David Devine who took bronze.

Abraham Tarbei bettered the world record he set in Beijing four years ago as he sped home to successfully defend the men’s 1,500m T46 title in a time of 3:50.15.

“It was my ambition to come here and to break our record which has come today, so I am very happy, very thankful,” Tarbei said.

“For the past 18 months I have been training in Iran with an Asian champion who has guided me. Tonight my only tactic was to maintain my distance, but in the last 100m I gave it my all,” he said.

Elena Pautova of Russia dominated the women’s 1,500m T12 final from the gun, stretching the field with only the Spaniard Elena Congost able to keep in touch. The world champion then pulled further away to cross the line comfortably ahead of her rivals. Congost took silver with Annalisa Minetti claiming bronze – a repeat of the 1,500m T12 medal lineup at the European Championships earlier this summer.

There was a closely fought battle to the line in the men’s 200m T11, but it was Felipe Gomes who took the top spot on the podium just two hundredths of a second ahead of his compatriot Daniel Silva. Gomes was clearly thrilled by his win, somersaulting and swirling his hips in celebration.

“I spoke with my son Daniel today, he said that he saw me running on the TV and that he runs faster than me. I believed that he would be seeing me now and I did the best for him. When I left Brazil, he asked for a gold medal,” said Gomes.

In the men’s 400m T46, Gunther Matzinger clocked 48.45 to take gold in convincing style, as did Assia El Hannouni of France who coasted home to victory in the women’s 400m T12, her third Paralympic 400m gold and ninth Paralympic medal in all.

Russia's Evgenii Shvetcov added to the European title he won earlier this summer with victory and a new world record in the final of the men’s 400m T36, beating the defending champion Roman Pavlyk in the process.

In the men’s 100m T12, Fedor Trikolich recorded a lifetime best as he took gold in 10.81, whilst Walid Ktila set a new world record as he clinched victory in the men’s 200m T34.

And the first of the 2012 Paralympic relay action got underway, with the final of the women’s 4x100m T35-38. World-record holders Russia took gold, with China and Great Britain second and third.

In the field events, Moroccan Azeddine Nouiri set a new world record mark of 13.10m on his way to winning gold in the men’s shot put F34 final, whilst the men’s long jump F20 gold went to the world champion, Jose Antonio Exposito Pineiro, with a winning leap of 7.25m, a new Paralympic record for the Spaniard who already had a Paralympic gold medal to his name after winning in Sydney eight years ago.