The battle for the remaining Rio 2016 qualification spots began, with the USA and France starting strong. 19 Apr 2016
Imagen 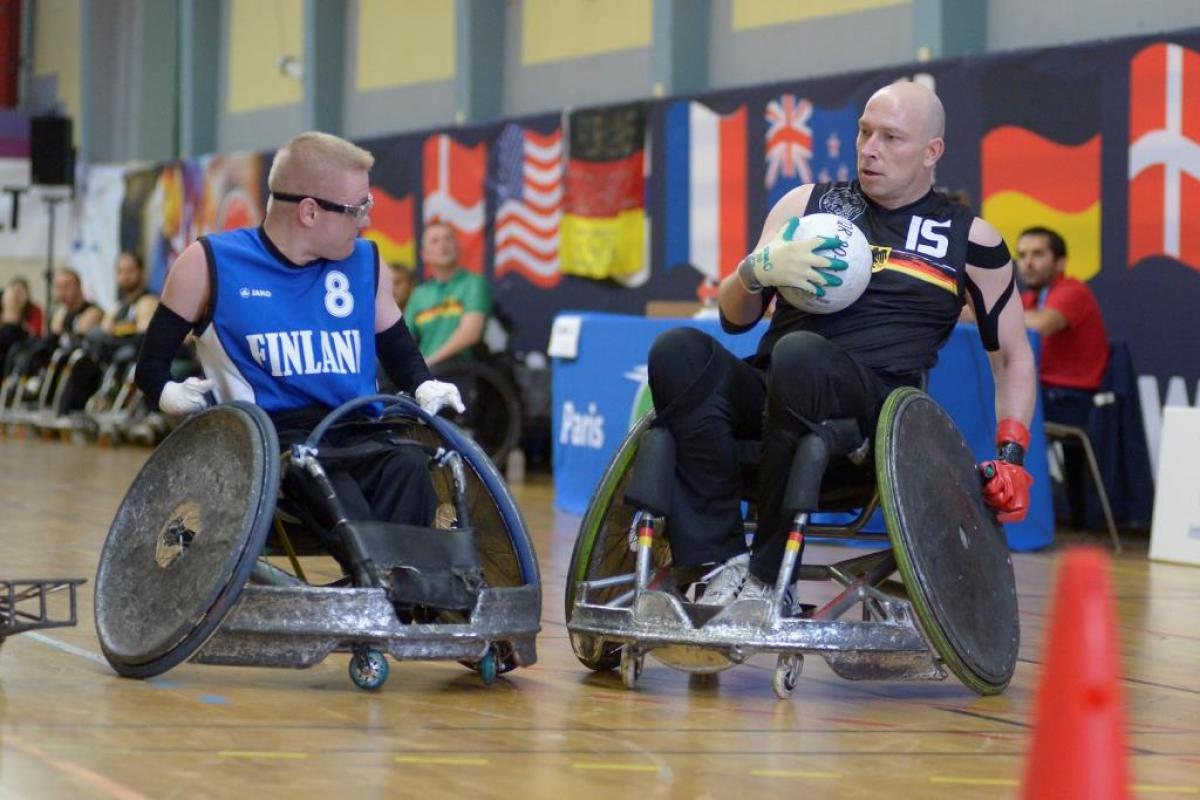 Germany beat Finland on day one of the Paralympic Qualifying Tournament in Paris, France.

Competition continues Tuesday (19 April) and runs until Thursday (21 April). All fixtures are being live streamed on PK Sport TV.

France opened the tournament in style with a thumping 64-33 win over Finland. The hosts did find themselves behind in the opening exchanges with Finland’s Antti Sinisaari scoring a few of his nations early points.

Jonathan Hivernat was always a threat for the French side, but the introduction of Ryadh Sallem was a turning point for the home nation. With France trailing by two, Sallem entered the court and within seconds had single handily levelled the scores. Sallem’s quality in the final minutes of the first quarter was obvious as France took a 15-12 lead into the second period.

The game opened up in the second quarter and France were forcing mistakes from Finland and opened up a six-point advantage after some good work from Christophe Salegui. Finland were clearly getting frustrated and letting their emotions show as a comeback slowly fell out of their grips, going into the second half nine points down.

Finland kept a high tempo after the half-time break and were pressuring France into a couple of handling errors to pull some points back. But the hosts went up another gear to take a 19 point lead into the final period.

France with the influence of Sallem finished the game strongly and did not show any signs of slowing down as they ended the game 31 points clear.

USA dominated the early stages with suffocating defensive work and quickly built an early 5-2 lead. The USA boasted a loud bench, which was spurring on their colleagues on court as they extended their lead in the second period.

A half-time score of 32-21 had set Team USA up for a likely win, but Germany did not let up and continued to press the world No. 2 side.

USA held that strong lead with star Chuck Aoki doing his bit to keep the gap between his team and Germany.

Sixteen points separated the sides going into the final eight minutes and USA managed the clock well to extend the lead. There was a big smash in the final moments as Seth McBride sent Andrej Leonhard toppling over.

USA kept the pressure on until the bitter end with a goal right on the buzzer to close.

There was nothing to separate the two sides in the opening quarter and it was all level at 15-15 going into the second period. Denmark built an early two-point lead in the second quarter but the introduction of Hayden Barton-Cootes added some extra energy to the New Zealand line and he helped to pull the scores level.

In the third quarter Denmark stretched their lead to five as New Zealand looked to be losing their grip on the game. Little mistakes were the difference as Denmark took a four-point lead into the last period.

There was some great play in the final quarter and New Zealand battled to pull the score to within two points. The defining moment of the game came when Denmark went three points clear whilst Jon Johanneson was in the penalty box. The trio on court broke free to keep their slender lead.

New Zealand rallied again and pulled the score back to just one point to set up a nervous final minutes. Denmark kept their cool and managed to keep the lead despite Kiwi pressure to win the tightest game of the week so far.

Germany bounced back from their morning defeat with victory over Finland who are still hunting for their first win in Paris. Germany took an early three-point lead after the opening quarter with the score at 13-10 after eight minutes of play.

Finland let the lead slip further in the second period, with the gap quickly stretching to eight points. A last second goal from Jukka Parviainen sent the 2015 European Championship hosts into halftime with seven points to catch up.

Leevi Ylonen and Parviainen were inspiring a mini-comeback in the third quarter and pulled the score back to within four points. Germany managed to hold their own and restored a six-point advantage leading into the final period.

Germany pulled away in the final stages and opened up an 11-point gap and kept that as the clock ran down as they recorded their first win of the week.

France made it two wins in two to mark a successful first day on their quest for Paralympic qualification.

The Danes, who were in high spirits following their win against New Zealand hours previous, pushed hard against the hosts but just fell short.

France were helped by a packed out crowd who were in high spirits giving the home side the mental edge on court. It was an even encounter in the opening quarter but France took a two-point lead into the first break.

The home nation pulled away further, extending the lead to six before Leon Anderson and Jon Johanneson worked well together to get within four points of their opposite counterparts.

France took a five-point lead into the half time break and kept up the pace to increase their lead to six points in the final quarter. A routine finish for the hosts who were spurred on by the carnival in the stands ended the game.

In the final game of the opening day, USA continued their winning run with an emphatic win over New Zealand. The Wheel Blacks had battled hard with no success earlier in the day against Denmark and the evening tip-off with the BT World Wheelchair Rugby Challenge 2015 runners-up was always going to be a tough game for the Southern Hemisphere team.

USA, as anticipated, built an early lead in the first quarter and a valiant New Zealand team rallied but could not prevent the 2008 Paralympic gold medallists from opening the gap further to 12 points by half-time.

It was much of the same again after the re-start and New Zealand were helpless in letting the lead slip further away, giving themselves a mountain to climb being 19 points down with one period to play.

As the clock ran down, USA ran the score up and the game eventually finished with a 20-point gap. 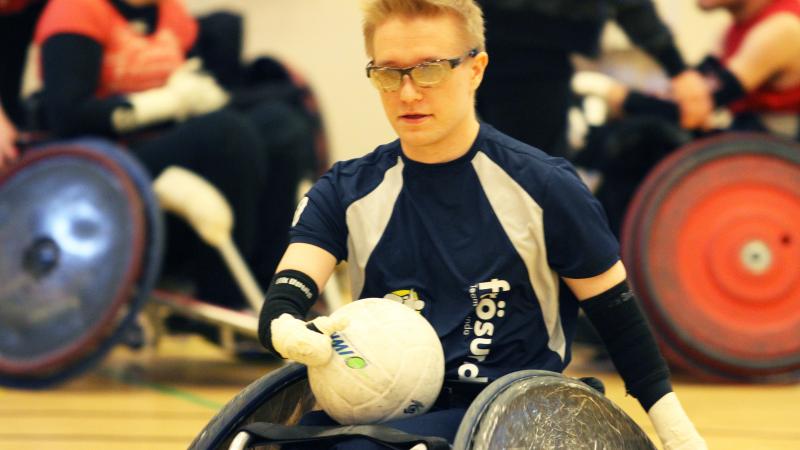 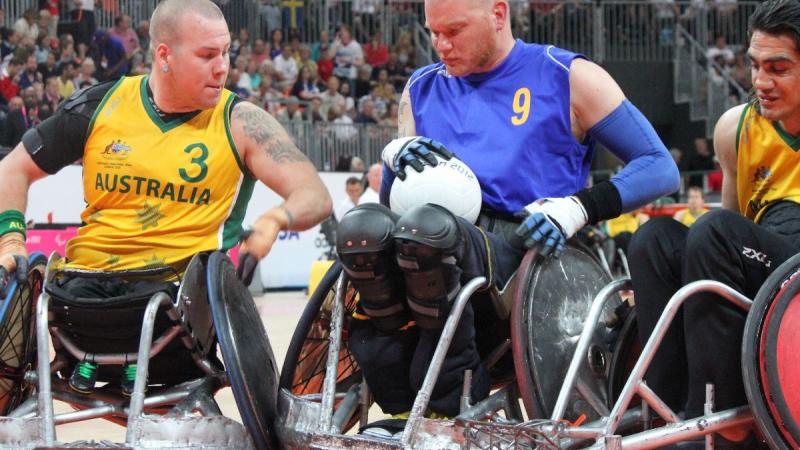