Heats from day one see teams from Russia, Brazil, Norway, Israel, Australia France and the USA advance to the finals. 27 Aug 2013
Imagen 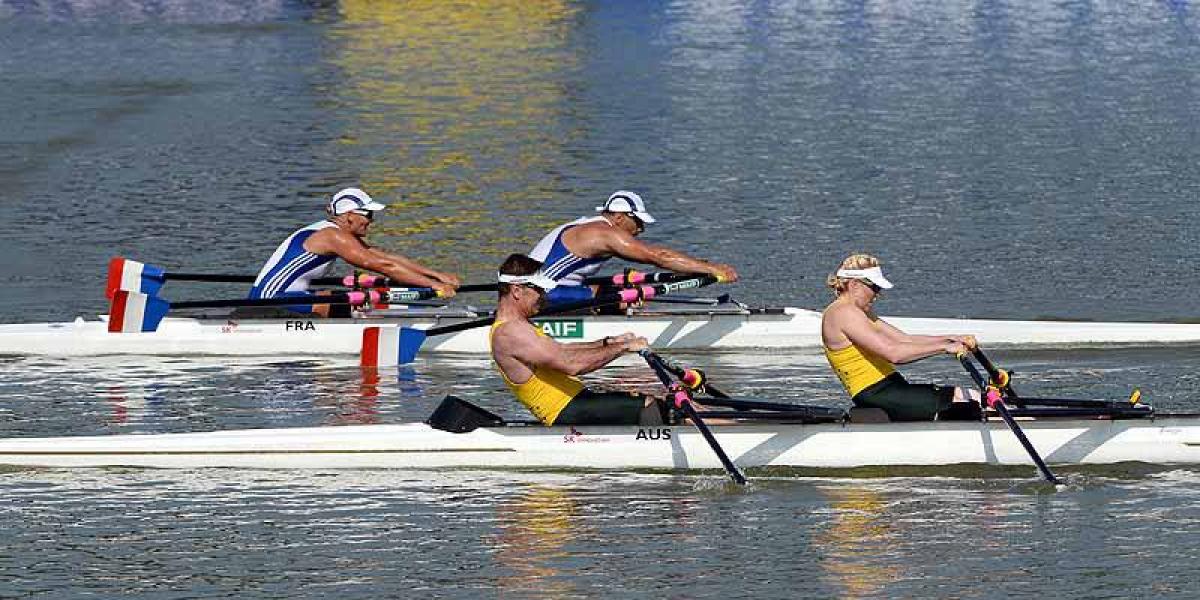 France (Perle Bouge (b), Stephane Tardieu (s)) and Australia (Gavin Bellis (b) and Kathryn Ross (s)) compete in the second heat of the TA mixed double sculls at the 2013 World Rowing Championships in Chungju, South Korea.

Para-rowers took to the water yesterday (26 August) for the heats at the 2013 World Rowing Championships in Chungju, Korea. The stand out performance went to Eric Horrie of Australia who, with relative ease, had the fastest qualifying time in the AS men’s single sculls. Horrie’s time of 4:48 was just three seconds outside of the world best time.

Hot, calm conditions with a slight head, cross wind had the para-rowers racing from a fixed start at the 1000m mark of the 2000m course, and through to the finish of their 1000m race.

The two heats of the AS women’s single sculls set the goal of these upper-body rowers to be in a top two position if they wanted a direct path to the final. Russia’s Natalia Bolshakova featured in heat one. Bolshakova is having a great season so far. She won at the Gavirate Para-rowing regatta beating Paralympic champion, Alla Lysenko of Belarus, and then won again at the World Rowing Cup earlier this season in Eton Dorney.

Today Bolshakova got out to a handy lead at the start and never really had to push it in the second half of the race. In second Claudia Santos of Brazil made a solid effort, but could not catch up to Bolshekova. Bolshekova and Santos are the two scullers that will go directly to the finals on Thursday.

Heat two had Birgit Skarstein of Norway taking the lead. Skarstein was third at the World Rowing Cup in Eton Dorney in her first season racing internationally. Today Skarstein shined, coming through to the finish at a 49 stroke rate pace. Following Skarstein was Israel’s Moran Samuel who has been a regular on the para-rowing scene in recent years. These are the two scullers that will move directly to the finals.

Surprisingly, in heat two, coming in third was Paralympic champion and world best time holder Alla Lysenko of Ukraine. Lysenko finished second at the World Rowing Cup in Eton Dorney and has not really fired so far this season.

The two heats in this event required scullers to be in a first spot if they wanted to go on the direct path to Thursday’s final. Heat one was the sensational race of the day with Australia’s Erik Horrie coming through to finish just three seconds outside of the world best time. Horrie, who was the silver medallist at last year’s Paralympic Games, was under no pressure and, at a 30 stroke rate, Horrie looked incredibly relaxed, his stand-out feature being the length of his strokes through the water.

At the line Horrie had gone 4:48.20 to qualify directly for the final.

World champion Tom Aggar raced in heat wo and came out of the blocks in second behind Alexey Chuvashev of Russia. Aggar and Chuvashev have been regularly challenging each other throughout the season with Aggar getting the better of Chuvashev at the World Rowing Cup in June in Eton Dorney.

Coming into the finish Aggar was at 35 strokes per minute with Chuvashev going up to 41. Chuvashev got to the line first forcing Aggar to return for a repechage, while the Russian goes directly to the final.

This event had attracted eight nations and they were divided into two heats with the top boat only in each heat taking a direct path to Thursday’s final. In heat one, Paralympic bronze medallists, Robert Jones and Oksana Masters of the United States dominated the race. The duo, who took bronze earlier this season at the World Rowing Cup in Eton Dorney, led from start to finish and looked comfortable as they came through to the finish using long-reaching, 38 stroke rate, strokes.

Behind the Americans, the Dutch put in a fine effort but will have to return for tomorrow’s repechage.

Heat two was the faster heat with France and Australia going head-to-head for the entire 1000m. France’s Perle Bouge and Stephane Tardieu had won this event at the World Rowing Cup earlier this season in Eton Dorney and also took silver at last year’s Paralympic Games, but it was Gavin Bellis and Kathryn Ross of Australia who had the early lead. Bellis and Ross were fifth at last year’s Paralympic Games and have been plugging away since then.

Coming into the final strokes, France and Australia remained locked together, Australia at a 41 stroke rate pace and France at 35. France was just slightly faster and crossed the line to secure the spot in the final. 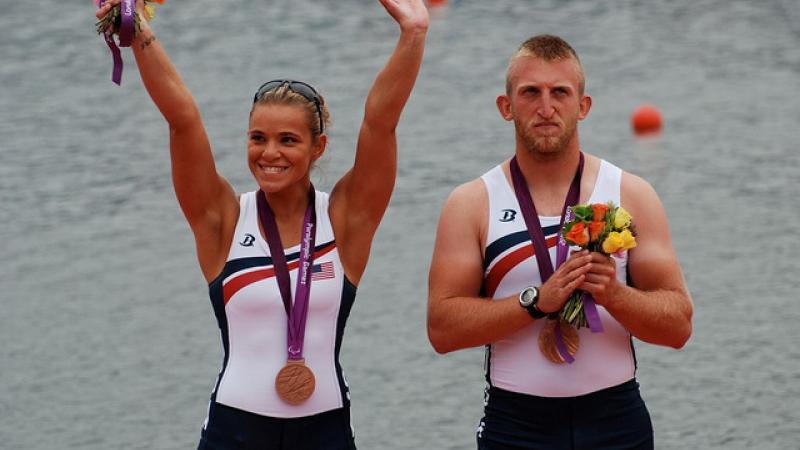