The first Swimming World Championships since the London 2012 Paralympic Games will be staged in Montreal, Canada. 24 Jan 2013 By IPC

“Many of the swimmers who competed at the London 2012 Paralympic Games, breaking 148 world records, will compete in Montreal. Just like in London I expect them to thrill spectators and TV viewers around the globe with their sensational performances."

The event will be the first major gathering of international athletes since the London 2012 Paralympic Games and is expected to attract around 650 of the world’s best swimmers from 50 countries. It will take place between 11 and 17 August 2013 at Montreal’s Parc Jean Drapeau Aquatic Complex, a venue to the east of the city with a rich history for staging major international and national swimming competitions.

Although the Aquatic complex features three outdoor pools, Swimming Canada, the organisers of the Championships, plan to build a temporary structure around the eight-lane competition pool, effectively turning it into an indoor venue.

Xavier Gonzalez, the IPC Chief Executive Officer, said: “We are very excited about Montreal staging the IPC Swimming World Championships as it is a city with an excellent track record for staging major international sporting events.

“This Championship will give the Canadian public a good taste of elite level para-swimming ahead of the 2015 Parapan American Games that will be staged in Toronto.”

Jane Blaine, chairperson of the IPC Swimming Sport Technical Committee, said: “I am delighted that Montreal is hosting the IPC Swimming World Championships in August and I would like to invite all Canadians to come and experience first class para-sport.”

“Bringing this event to the site of the 2005 FINA World Aquatics Championships at the beautiful Parc Jean-Drapeau is bringing the world to Canada,” said Swimming Canada CEO Pierre Lafontaine. “It helps inspire, develop and sell sport for people with disabilities across our nation.”

One of Canada’s most decorated swimmers and flag bearer at the London 2012 Closing Ceremony, Benoit Huot - a winner of 22 World Championships and 19 Paralympic medals - is expected to star for the host nation.

“It’s great that I’m going to be able to compete for the first time at home, not only in Canada but really in my backyard where I train every day,” said the winner of 22 World Championships and 19 Paralympic medals. “It’s something every athlete would dream of to be able to have this opportunity so I’m looking forward to it.”

To promote the IPC Swimming World Championships, the IPC has launched an event microsite with the latest news, ones to watch, athlete biographies and useful information for teams. 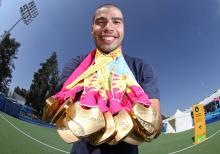