With a growing interest in Paralympic sport, it is not all about the summer events. The IPC's Stuart Lieberman shares why the Paralympic Winter Games matter, too. 23 Oct 2012

It’s up to you, the audience, to determine the direction the Paralympic Winter Games go. Sochi 2014 will be what you make of it.

Yes, I get that winter’s cold and you do not want to leave your home.

There’s no denying how nice it is to enjoy a nice cup of hot cocoa in front of a warm fireplace.

But I come from Minnesota (USA), where winter sport is king.

We enjoy the outdoors in below-freezing temperatures just as much as we do hot, humid heat streaks. Our backyards turn into ice rinks and ski slopes by this time of year, and there’s nothing better than hearing the sound of your feet crunching on that first snowfall in October.

That is why I am tired of everyone saying the Sochi 2014 Paralympic Winter Games will not even come close to London 2012.

OK, so they will not have the same number of athletes, countries, sports or medal events, but since when does that matter?

Winter sport in some sectors of the world is bigger than summer sport, so the countries that make the headlines may differ, but what captures an audience is still the same. All it takes is one aggressive ice sledge hockey hit to wow crowds, one impressive wheelchair curling shot to go viral on YouTube or one Paralympic snowboarder to do something amazing to capture a global audience.

A TV audience of nearly 1.6 billion tuned into the last Paralympic Winter Games in Vancouver, for which the IPC livestream on ParalympicSport.TV was accesseed more than 437,000 times.

In addition to trying to top those numbers, Sochi 2014 has given Russia a unique chance to change for the better through creating a barrier-free environment.

Russian government is taking unprecedented steps to improve the lives of people with a disability in the country, as more than 20 states are now involved in barrier-free projects and are aiming to make all transport and facilities accessible not just for the Games, but also permanently for years to come.

To do that in a winter environment with snow and slush is much more difficult than in a dry summer’s heat, and if all comes through, Russian gains in accessibility may even top those made in Great Britain the last several years.

But let’s get back to the athletes now – the faces of the Games who will become household names across the globe in just 500 days.

Canada’s Brian McKeever, who has just 10 per cent of his vision intact, should be one of the stars of the Games in nordic skiing with seven Paralympic golds, two silvers and a bronze already to his name, in addition to being chosen for his country’s 2010 Olympic team. Although he did not end up competing at the Olympics, his ambition in Sochi is to become the first athlete to compete in both Games.

Pavel Kubes, captain of the Czech Republic’s ice sledge hockey team, started playing his sport in 2004 after seeing a documentary about teammate Tomas Kvoch, and now, he’s one of the best defensemen in the world.

“I remember myself 10 years ago watching the documentary and trying the sport, and now look, I’m the captain of the team,” Kubes said earlier this year.

Russia’s Mikhalina Lysova, meanwhile, looks to be the next big visually impaired female nordic skier now that Germany’s Verena Bentele has retired, and she could easily become the poster girl for the host nation in Sochi.

USA’s Evan Strong hails from Hawaii but has spent the last several years transitioning from surfing and skateboarding to snowboarding, which will make its Paralympic Games debut at Sochi 2014.

So there is no shortage of talent or human-interest stories on the ice, trails and slopes.

But it’s up to you, the audience, to determine the direction the Paralympic Winter Games go.

I don’t know about you, but I’m leaving the computer right now to head outside and enjoy the cold.

The hot cocoa will still be waiting for me when I return. 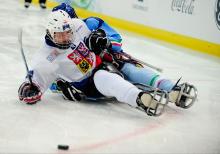 The Czech Republic's Pavel Kubes is one of the best ice sledge hockey defensemen in the world.