Checking in with Chalmers

The IPC caught up with American Paralympian Ryan Chalmers, during week four of his 71-day push across the U.S. 13 May 2013
Imagen

The USA's Ryan Chalmers will try to change perceptions of people with an impairment in his country with his Push Across America.

ⒸJim Gates
By Ros Dumlao | For the IPC

On 6 April, the 1,500m T54 wheelchair racer Ryan Chalmers began his ‘Push Across America’ – a 71-day, 3,500 miles (5,600km) feat from Los Angeles to New York to raise awareness for the Paralympic Movement and funds for non-profit Stay Focused.

After four weeks, he’s concluding possibly the most physically demanding part of the push, surviving the hottest parts of America as he progresses through scorching deserts and the hilly terrains of the Rocky Mountains.

We caught up with Chalmers during one of his rest days in Durango, Colorado.

Paralympic.org: How were the early stages of your journey?

Ryan Chalmers: The first three, four days were a shock to my entire body. So it was just getting my body used to that. I could feel my legs, and so my knees were just killing me for the first four days, but I got used to it. I had wrist issues and shoulder issues, but my athletic trainer Karla (Wessels) has done an incredible job after each push to help me be ready for the next morning.

Have you had any equipment problems that have slowed you down?

I flatted a couple of times. There’s one section going down the Valley of Fire (in Nevada), where it was about a 17-mile downhill after a 13-mile incline. I flatted my front tyre about four miles in. So the last 13 miles going 20-30 miles per hour were a little dicey.

Did you come across any weather challenges?

We went through a dust storm in Nevada. There was a cross wind, and a pretty good dust storm that came by, but other than that, weather’s actually been holding up pretty well.

So far, what’s been the best part of your journey?

Since I haven’t done this before, I’ve loved every day. I don’t think we lost sight of a mountain in the last three weeks. I’m from Champaign, Illinois, and we don’t really have those.

When I’m going uphill, I just put my head down and don’t really get to look around. But going down through the Valley of Fire was incredible. I was able to see the red mountains, and it was something that will stay with me forever. Every day, I’ve found something that was really gorgeous.

How about the most difficult part?

Has there been a time during the Push when you wanted to quit or question why you are doing this?

No. There were times when my shoulder would start to kick up, and I was worried that I’d have to be pushing with one arm instead of two. But I never once thought about quitting. This is something I committed to a long time ago, so quitting is not an option.

What has been keeping you motivated?

It’s my commitment since the beginning; it’s Roger (Muller, Founder and President of Stay Focused), - I know the struggle he’s been through in making the organisation it is today. I look at Facebook and the Twitter and how people are responding to what we’re doing; that helps a lot. And the phone calls, all of that really does help, especially through those long days.

Seeing the people that pass us by and wave or give us a thumbs up really helps because it shows that the goals that we set out are being accomplished. We want to raise awareness for disability sports and show that people with a disability are no different than an able bodied person.

Things will change a little bit once we get over the mountains because the last three weeks have been up and down, up and down. We haven’t had too many days that have just been flat. Once we hit Kansas, Champaign, Illinois, it will really depend on the wind direction and the day and the weather. 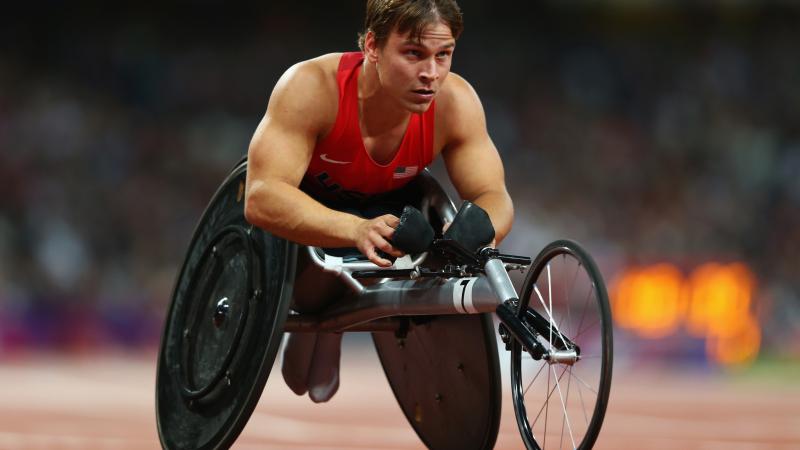 Athletics
Chalmers to 'Push Across America'