Cariocas’ delight at more gold medal success. But final weekend of Rio Paralympics is overshadowed by the tragic death of a Para cyclist. 17 Sep 2016
Imagen 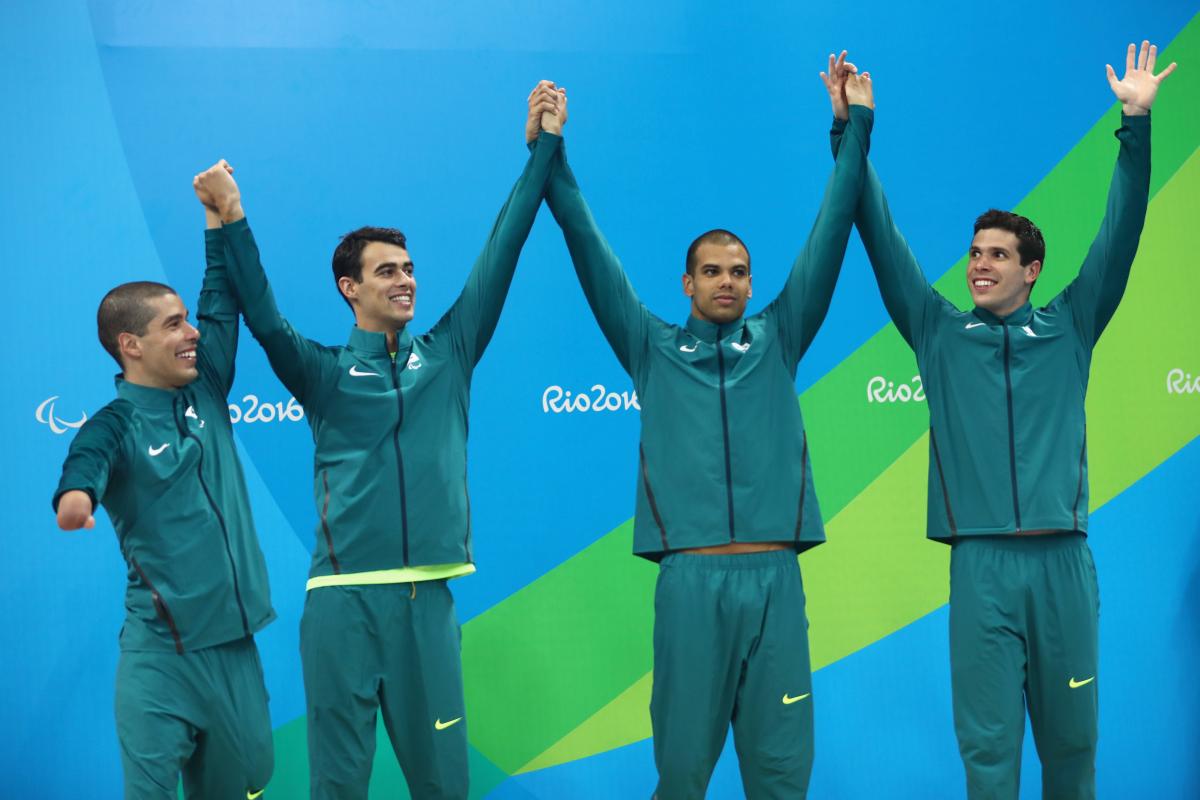 Bronze medalists Brazil celebrate on the podium at the medal ceremony for the men's 4x100m medley relay - 34 Points at the Rio 2016 Paralympic Games.

In the end, the final weekend had to have a golden glow for Brazil.

The nation – which has so joyously embraced the Paralympics over the past 10 days – celebrated gold-medal success in the swimming pool and, perhaps inevitably, on the football pitch on Saturday (17 September).

It was, however, a day when events in the sporting arena were overshadowed by the tragic death of Iranian Para cyclist Bahman Golbarnezhad whilst competing in a road race.

The 48-year-old was involved in a crash on the first section of the Grumari loop, a mountainous stretch of the course. The athlete received treatment at the scene and was in the process of being taken to the athlete hospital when he suffered a cardiac arrest.

Sir Philip Craven, IPC President, said: “This is truly heart-breaking news and the thoughts and condolences of the whole Paralympic Movement are with Bahman’s family, friends, and teammates as well as the whole of the National Paralympic Committee (NPC) of Iran.

“The Paralympic Family is united in grief at this horrendous tragedy which casts a shadow over what have been great Paralympic Games here in Rio.”

At the Olympic Park, the Cariocas once again flooded into venues to witness more of the outstanding athletic performances which have come to characterise these Games – not least from those proudly competing for the home nation.

Those who flocked to the Olympic Tennis Centre to see Brazil take on Iran in the football 5-a-side final did so in expectation of victory. And they weren’t disappointed as a dominant display resulted in a 1-0 win, with the crucial goal scored by Ricardinho.

His team-mate Jefinho, one of the tournament’s outstanding players, said victory on home soil was extra special for the Brazilians, who extended their unbeaten run to four Paralympic Games.

“I always thought about this moment: listening to our national anthem in a packed stadium at home with a Paralympic gold medal around my neck,” he said. “We are used to winning, but doing it in our country is different and beautiful.”

The Brazilians’ love for swimming may be less well-known than their affection for the beautiful game. But there is no doubt that swimming will have gained a few more fans over the last 10 days.

Much of that is down to Daniel Dias, who won his fourth gold medal of Rio 2016 on Saturday night, controlling the men’s 100m freestyle S5 race from the start.

But the biggest cheers at the packed Aquatic Centre greeted not a gold medal but rather a bronze. Brazil’s men’s 4x100m medley relay 34 points team staged an astonishing comeback, moving from a distant last place to scoop third place by the narrowest of margins in a new Americas record time, to ecstatic celebrations in the stands.

The story of the night in the pool belonged not to Brazil, however, but to Belarus’ Ihar Boki, who dominated the men’s 100 backstroke S13, winning his sixth gold medal and setting new world record time of 56.68. With the win, 22-year-old Boki also became the most decorated Paralympian from Rio 2016 with seven medals overall, also collecting a bronze in the men’s 100m breaststroke SB13.

“There is a feeling of lightness because I did so much work to achieve this,” Boki said. “I’m happy that I was able to have decent results in this competition, and that I was able to stay strong. All of these 10 days were very difficult and I had to swim a race almost every day.

Over at the Olympic Stadium another Brazilian was starring in a comeback performance – this time in the men’s 400m T47. Home favourite Petrucio Ferreira dos Santos also came from a distant last place at the 300m mark to finish with a silver medal behind Cuba’s Ernesto Blanco who won gold in 48.79.

The headline-maker in athletics, though, featured another Cuban, as Omara Durand proved unbeatable once again; she clinched her third gold of Rio 2016 in world record time – one of seven world records to fall on the final day of track-and-field competition.

Durand won the 400m T12 to add to her 100m and 200m titles and it was also her third world record of the Games; she already smashed her own 100m best, as well as lowering her record over one lap in the heats at the Olympic Stadium.

The 24-year-old is the fastest female Paralympian in the world and she showed just why as she tore round the track in 51.77, knocking over a second off the mark she set in qualifying two days earlier. “I’m really satisfied and super happy, it’s very emotional,” she said.

Earlier there was an impressive showdown between some of the brightest talents in Para athletics as China’s Xia Zhou, 17, beat reigning world champion Isis Holt in the 200m T35 competition, setting a new world record in the process. The all-teenage podium was completed by 16-year-old Maria Lyle of Great Britain.

Back at the Olympic Park, the men’s basketball gold went to the USA who defeated Spain 68-52 to land their first Paralympic title for 28 years. “To think about what we accomplished and to accomplish it together with this group of guys, it’s special,” the USA’s joint-team captain Steve Serio said afterwards. Great Britain beat Turkey to take the bronze medal.

There was more gold for the US. In the women’s sitting volleyball final, the USA ease to a 3-0 victory over their rivals China in the women’s gold medal match at Riocentro. It marked the end of the Chinese dynasty that saw the women’s team win every Paralympic title since its debut at Athens 2004. The match was a reverse of the outcome of the final in London four years ago which saw China clinch a 3-1 victory. Hosts Brazil clinched bronze with a 3-0 victory in the third-place play-off match against Ukraine. The men’s final on Sunday will also see old rivalries resume when Bosnia and Herzegovina meet Iran for the fifth successive time a Paralympic final.

Meanwhile, the wheelchair rugby competition reached the semi-finals stage where there were victories for Australia and the USA who will now meet in Sunday’s gold medal match. The USA was the first team into Sunday’s final with an impressive 60-55 victory against arch rivals Canada, while defending champions Australia joined them later in the afternoon with an equally clinical effort against Japan, which saw them win 63-57.

The death of Bahman Golbarnezhad inevitably overshadowed events in the road cycling competition. The day did, however, see yet another gold medal for Great Britain’s Sarah Storey in the women’s road race C4-C5. It was the 38-year-old’s third of the Games and 14th of her career in both cycling and swimming. Poland’s Iwona Podkoscielna and her pilot Aleksandra Teclaw won gold in the women’s road race B. In the men’s competition, there was double-gold success for the Netherlands’ with victories for Daniel Abraham Gebru in the C4-C5 and for Vincent ter Schure in the road race B.

Great Britain completed a clean sweep in the W1 women’s archery competition – including gold for the youngest athlete on the field – as the nation celebrated its most successful ever Paralympics. Sixteen-year-old Jessica Stretton beat British teammate Jo Frith by 13 points, 137-124, while Vicky Jenkins took bronze in the category, which is new to the Paralympics. Britain also won gold on Saturday in the W1 mixed team competition – their sixth of the Games in archery – as top-seeded duo Jo Frith and John Walker took the honours.

In table tennis, Gu Gai and Zhang Bian repeated their London 2012 success when they retained their Paralympic title in the women’s team class 4-5 final with a two-matches-to-nil victory over Serbia’s Nada Matic and Borislava Peric-Rankovic. The Chinese duo secured the doubles in four straight games (11-9, 11-2, 11-9), before Bian defeated Peric-Rankovic (11-9, 11-6, 11-7). Poland took the honours in the women’s team class 6-10 gold medal match thanks to an outstanding performance from 18-year-old Karoline Pek, who beat China’s Lei Lina in four games to secure the victory.

In the final day of the sailing competition, France’s Damien Seguin won the only gold medal still up for grabs in the 2.4 Norlin OD. It was Seguin’s second Paralympic gold following his victory in Athens in 2004. 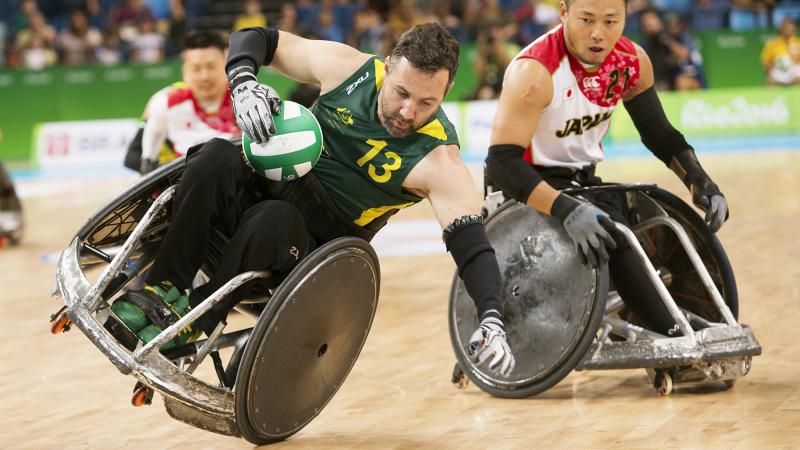 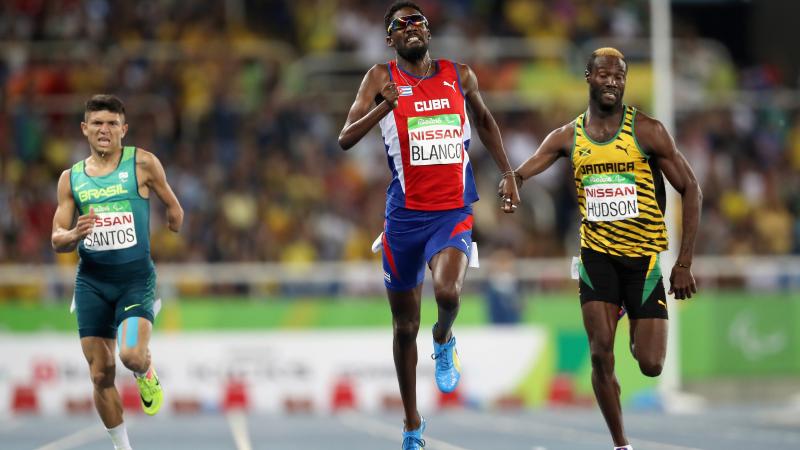 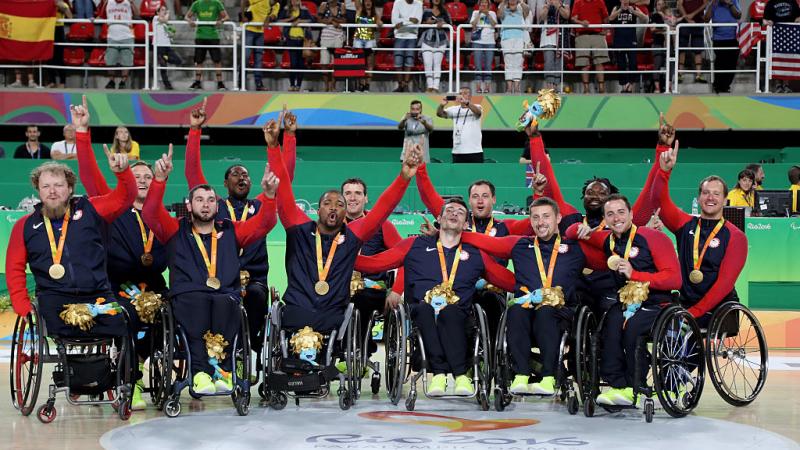