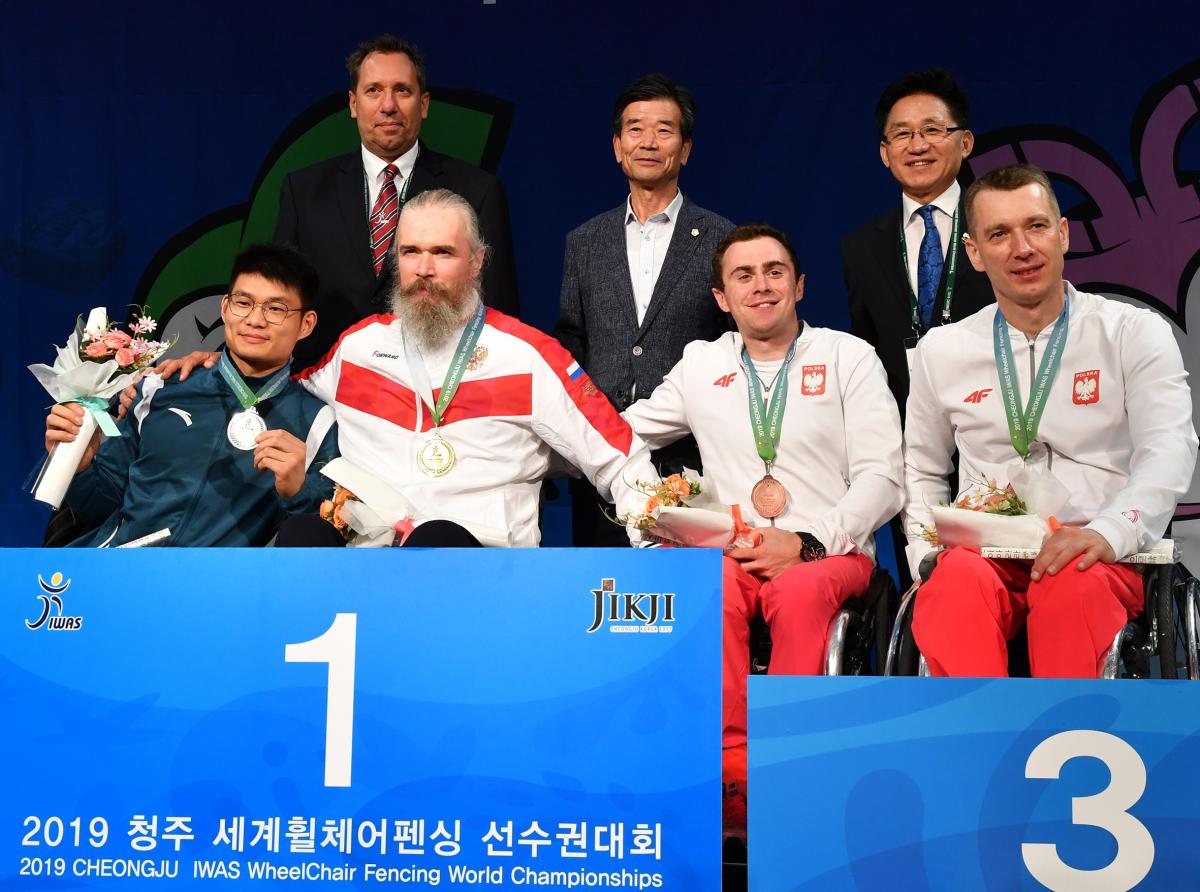 Alexander Kurzin’s nine-year wait for a world title came to an end on Friday, as he stormed to gold at the 2019 International Wheelchair and Amputee Sports Federation (IWAS) Wheelchair Fencing World Championships in Cheongju, South Korea.

The Russian, who made his international debut in 2010, was competing at his sixth Worlds.

He took on China’s Asian champion Yanke Feng in the men’s sabre category B final, winning 15-10 in a nail-biting contest.

Kurzin began the match strongly, charging to an 11-3 lead. Just as it looked like it was all going the way of the Russian, Feng came alive and landed nine points while Kurzin could only add one.

With the score at 12-9, Kurzin touched once more. Feng replied with his own successful hit.

The Russian fencer, sensing that the momentum was with Feng, reacted with two hits to end the match 15-10. Feng was resigned to his silver medal and removed his mask before the referee had awarded the last point.

Kurzin’s gold improves on the bronze he won at the 2017 World Championships in Rome, Italy. The win is also Russia’s first gold of Cheongju 2019.

Poland’s Rio 2016 Paralympic bronze medallist Adrian Castro took third after losing out to Kurzin in the semi-final. His teammate Grzegorz Pluta joined him.

In the women’s sabre A, a new event on the Paralympic programme as of 2020, it was all change on the podium.

Ukraine’s defending champion Natalia Morkvych fell in the last 16 as did 2017 silver medallist compatriot Yevheniia Breus in the semi-final.

Breus lost-out to Polish debutant Kinga Drozdz, who has been moving through the ranks since entering the international stage in 2018.
In the final it was Drozdz v China’s 2013 world champion Jing Bian.

The Chinese fencer recovered from her silver medal at her last World Championships appearance in 2015 to claim the title with a score of 15-8.

“At the beginning I was a bit nervous but as the match went on, I got better and better and more relaxed.”

In the men’s foil category C, Russia took another gold. Nikolay Lukyanov triumphed over Latvia’s Dmitrijs Valainis (15-7) to win back his title from 2011.

“I am very proud and happy and this is for my family, for my coach and for the Russian team,” Lukyanov said.

The silver is Valainis’ second medal of the competition after he won bronze in the epee on Thursday.

The International Tournament in the women’s epee C delivered a win for Italy’s Nora Consuelo against Russia’s Anna Gladilina.

Friday’s action marked the conclusion of individual competition in South Korea. From Saturday team events in all three weapons will take place, getting underway with the men’s foil and women’s epee.