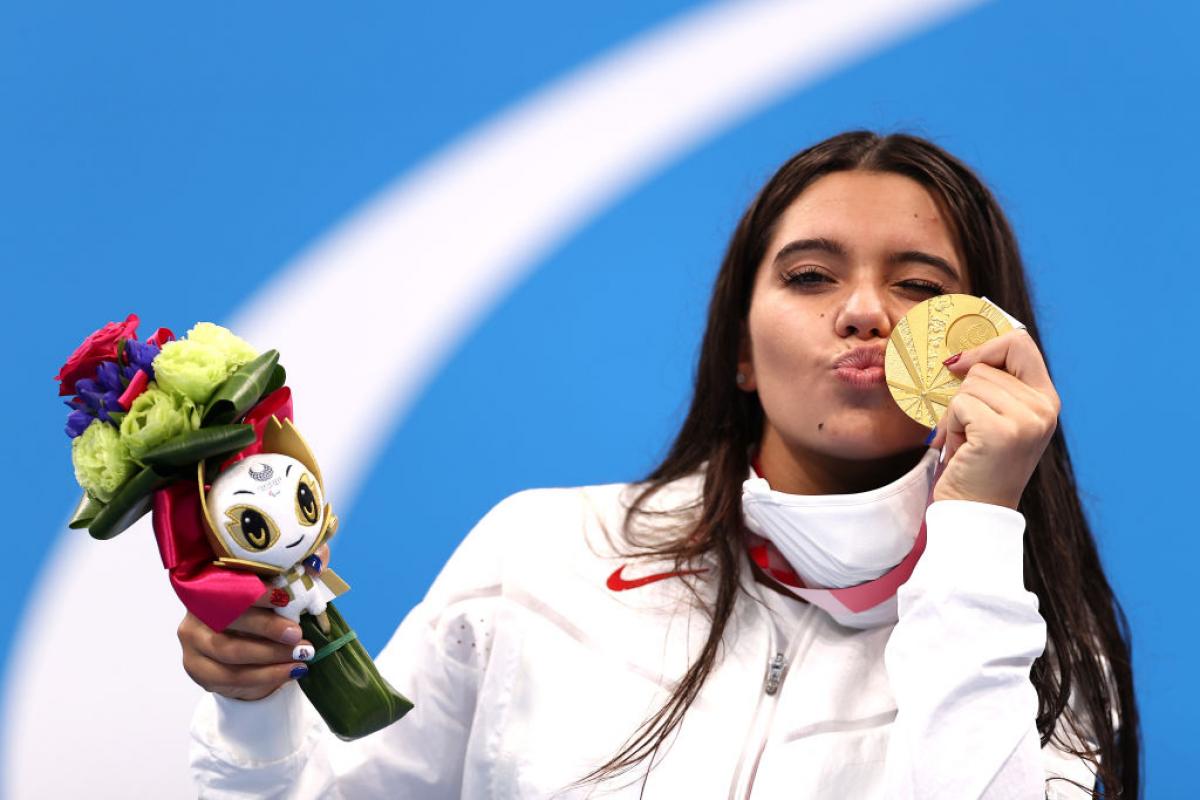 A day two with 11 world records saw USA’s Anastasia Pagonis go into the history books and a first gold for hosts Japan at the Paralympic Games in the Tokyo Aquatics Centre on Thursday (26 August).

The delighted 17-year-old finished in a time of 4:54.49 and nearly half a length ahead of two-time Paralympic champion and three-time world champion Liesette Bruinsma from the Netherlands, who finished in 5:05.34. China’s Liwen Cai took home the bronze.

"I knew that I always swim better at night, and I just needed to have my 'warm-up' in the morning and get used to the pool and get the nerves out, because I was super-nervous this morning. Now I feel super-confident going into all my other races," said the US swimmer who broke the Paralympic record in the heats.

USA also won its second gold when Gia Pergolini secured victory in the women’s 100m backstroke S13. She broke the world record twice in the heats and in the finals (1:04.64).

Japan’s Takayuki Suzuki made his dream come true of winning a gold medal for host nation and setting a new Paralympic record when he hit the wall first in the men’s 100m freestyle S4 at Tokyo 2020.

On what is his fifth and final Paralympics, he had an outstanding swim to win Japan’s first gold medal of the Games and break the record set by Japan’s Yuji Hanada at Athens 2004 in 1:21.58.

On a day full of standout performances in the pool, Great Britain’s Tully Kearney made up for the disappointment of not being able to compete in Rio 2016 due to illness, by winning the women’s 100m freestyle S5 setting a world record in 1:14.39.

The seven-time world champion finished more than three seconds ahead of China’s Li Zhang who won silver with Italy’s Monica Boggioni in bronze.

The second British gold in the pool went to her teammate Maisie Summers-Newton, who also set a world record in the women’s 200m individual medley SM6 in 2:56.68. Ukraine’s Yelyzaveta Mereshko – who had broken the world record in the morning heat – took silver and Germany’s Verena Schott bronze.

Belarus’ swimming legend Ihar Boki bagged his second gold of the Games in the men’s 100m backstroke S13 with a world record-time (56.36), keeping his quest to secure six golds on target to add to his 14 Paralympic titles.

"Just absolutely speechless. Paralympic #gold is what I dreamt of ever since watching Ellie Simmonds in London, so to do it now it definitely hasn't sunk in yet. Just incredible, I'm so happy."
- @maisiee26 🇬🇧#Paralympics #Tokyo2020 @Paralympics @Tokyo2020 pic.twitter.com/vnsA4TlLQZ

Gold for Crispin and Keane, more medals for Dias

It was also a double celebration for the Netherlands with Rogier Dorsman winning the men’s 400m freestyle S11 and Chantalle Zijderveld clinching victory in the women’s 100m breaststroke SB9 – also with world records in her heat and the final (1:10.99).

Colombia’s Nelson Crispin was overjoyed to claim victory in the men’s 200m individual medley SM6, as was Andrei Kalina of the RPC in the men’s 100m breaststroke SB8.

"I am very happy to get this medal, which I have been waiting for so long. It was a long road,” Crispin said of his first Paralympic gold with a new world record (2:38.12).

“I have been competing internationally for years. I was at my first Games in London 2012, then I was in Rio 2016, and now in Tokyo, where I was able to reach the top result.”

“I’m actually a bit in disbelief because my goggles filled up with water so I didn’t know where I was, I didn’t know where Sophie Pascoe [New Zealand’s silver medallist] was or the other girls beside me. I just gave it my all on the last 25,” she said.

China notched up victory in the mixed 4x50m freestyle relay 20 points with a world record (2:15.49) followed by Italy in silver and Brazil bronze.

Paralympic legend Daniel Dias was part of the Brazilian relay and also added another medal to his collection with a bronze in the men’s 100m freestyle S5 reaching his 27th podium in Games history.