Straight from the mixed zone, here is what the athletes had to say at the IPC Athletics World Championships at the end of their event. 27 Oct 2015
Imagen

“It was a bit annoying really, missing out on the gold by 1cm and in the last throw of the competition. What can you do though. Today the Slovakian was simply better, but I still hold the world record and the European record. Doha was my last competition as I will retire now, so it was nice to at least come away with a medal.”

“I am incredibly happy to have won gold for Algeria. It was such a difficult competition and I knew that the Bulgarian athlete was going to be very tough to beat because we perform on a very similar level, but thankfully all my hard work paid off.”

“The competition was really tough, and no wind at all, which makes it difficult to throw a good put. But I got the silver and I will now aim for gold in Rio.”

“It was a very difficult competition, but it was great. I am beyond happy.”

“I’m very happy to be here, and to win the silver. I have felt very comfortable here in Doha since I have arrived which helped me to achieve this result.”

“I am very happy to win the bronze medal and achieve a personal best. I will work to make better shots in the future and my aim is now to win a medal in Rio 2016.”

“The competition was good. For the most part we had straight runs, there were a few hiccups here and there but we got the results we needed to win and that’s the most important thing. I am looking forward to going home and resting, then I will get back to training hard for the road to Rio!”

“I am very happy it was a great competition, I didn’t really think about breaking my own world record, I just did it!”

“ I was really focused on my plan, I kept up with my strategy and fortunately I was able to get the bronze.”

“It’s a great feeling. Obviously I won the 100m in the last World Championships in Lyon so I believed that I could do it. I tried to break the world record, and although I didn’t manage to do that I still got the championship record and a gold medal so I’m happy.”

"I’m so happy! I got the same time in Lyon two years ago and I just now need to work my hardest to get that gold in my home country next year! The Polish athlete beat me in the 100m but I have beaten him in the 200m so we need a run off! I happy with the outcome!”

“I feel on top of the world! It was my goal to win, and I made it! I’m so happy and will now try to go for gold in Rio!”

“When I arrived at the finish line I didn’t know that I made it until I saw the results on the screen. I’m so happy! I’m looking forward for Rio, and I hope the competition is on the same level there.”

“I’m the world record holder and of course I went for gold – but I got the silver and I’m quite happy with that. I’ll get my gold in Rio!”

“Of course I’m so happy to be the World Champion and break the world record. I had a really good jump and I’ll hopefully be able to represent my country in Rio as well.”

“There was some really strong competitions here, but I got the silver medal and I’ve got to be pleased with that.”

“It was amazing, very action-packed. It was very emotional for me, I was wearing a black armband as my nan passed away this year and she was a massive influence for me and helped mould me into being strong enough for these types of competitions. It’s great to get a medal, I still have the 100m and 200m here but then I’ll head back home to train hard for Rio.”

“I feel fantastic, I came here hoping to take silver but managed to grab the gold. I am over the moon and will go back home and work hard for Rio.”

“I’m quite happy with the result. It was a really strong line-up but I’ll come away from Doha with a silver medal and that’s a great feeling.”

“It feels amazing being here among my family and friends. It actually feels great to have the responsibility of representing Qatar and making everyone proud including His Highness Sheikh Tamim. I’ve been preparing for months in Poland so I feel ready.”

"It’s all about pushing the sport on and inspiring all the people watching all over the world. It was a great race and I’m thrilled to break my World Record.”

“I was just trying to stay in a medal position and then I realized I had a little left in the tank and just went for it. This is not my strongest event so it’s a shock to be first. I can’t even express with words how I feel.”

“I’ll be heading back home in a few days feeling relieved and happy. The overall experience was so emotional and exciting.”

“I expected to Liu to win it. Overall it was a good race. A good start, some difficulties in the first stretch. I saw the Chinese athlete in the corner and gave it everything that I got and I have to be happy about that. It was a great time for me.”

“I feel amazing, I really didn’t expect this. I’ve hurt my leg so I’ll see a doctor now but it feels incredible to win gold here and break the world record!”

“My principal goal was to get a medal and I did that which is really pleasing.”

“It was a tough race and I am very happy to achieve a personal best which also gave me the gold.”

“I’m so extremely happy to win my first gold medal, and so proud to be a part of this team. My coach told me to keep fighting and keep running and I got there and won the world title. It was a really strong final and we had great support tonight here in Doha!”

“It went well overall. I got a personal best which is what I train for. David had an amazing race but this means I need to go back and see what I need to fix then come back stronger and faster. I never look at rankings before coming into competitions I came here to run my best and whatever happens, happens.”

“The race was great although I could have went a little faster but I’m happy because we have two medals, me and David.”

“It was a tough race and I am very happy to achieve a personal best which also gave me the gold.”

“I knew the Chinese was really strong and that he was one to watch. I thought it was an exciting race, we came out quite even on that last bend, but I just couldn’t catch him. I’m still extremely pleased with two gold medals and this silver medal so far, but I hope to avenge this with a world title in the 800m”

“I’m so happy. I can’t believe it! Doha is an amazing place to be and compete. I’m having so much fun.”

“I’m very happy with this result. It is very satisfying as this is my first World Championships. I want to dedicate this medal to my coach who helped me so much.”

“I knew I was the favourite going into the competition and I felt responsibility to live up to that. I won my second gold medal here and I’m very happy. It was quite easy.”

“I’m overwhelmed. I knew it was going to be tough, so I’m really pleased to have won a medal. I won gold in the club throw so that made me a little bit relaxed. I’m a little disappointed with my throw, but I got a medal and that’s what matters. It has been great for Britain so far and we’re having a fantastic time in Doha.”

“It feels absolutely amazing, I am really pleased. I have had quite a tough season so far so it feels good to do this for me and my team.”

“I felt very good. It’s nothing I ever imagined. It’s my first international competition so I didn’t know what to expect but I’m loving it so far! I’m having a great time.”

“This is my second bronze medal in these Championships. I’m very satisfied with this result as I didn’t compete for two years because of my pregnancy. I think that I will be more prepared and ready in Rio.”

“I have so much energy inside and honestly for this competition my competitors gave me the right energy to win gold. I get my energy from my family and the blue eyes of my daughter. They help me keep on training. I’m training in Valencia next and full of positive energy ahead of Rio!”

“I did not expect to win because the result was very close. I maintained my stability and stuck with my plan which helped me to succeed.”

“I’ve only been doing discus for two years, so to get a bronze medal is simply fantastic. It was a really tough competition and I’m absolutely exhausted but it was all worth it!”

“Toni has all the pressure on him whilst I was enjoying the underdog position. Everything went right for me today – I had a good launch which I’ve trained all year for. I’ve been waiting long for this. I arrived even before the World Championships started impatient and raring to go and I’ve been inspired by all the Belgians doing well so far and that set me up for a fantastic gold medal.”

“It was very close, probably the closest race ever. I wasn’t happy with the start but today I just wasn’t good enough. Usually I take the gold medal but today it wasn’t meant to be.”

“This is my first medal in these Championships. I am disappointed because I wanted more. I came here with big dreams, and I’m still holding on to them. I hope to realize my dreams in Rio. I dedicate my medal to all Arab countries and especially Algeria.”

“I felt that it was a going to go well for me. I did really well in the preliminaries and knew that I had the fastest time – so I just tried to build on that momentum and thankfully that gave me the gold medal.”

“After 6 World Championships I consider this competition the pinnacle for me. I’ve been training and working very hard over my 27 year career and after Rio, I will most probably retire – young guys deserve space!”

“This was a very good prize for me. I am extremely happy with the bronze as for the last two years I have not won a medal. It is a step ahead for the future.” 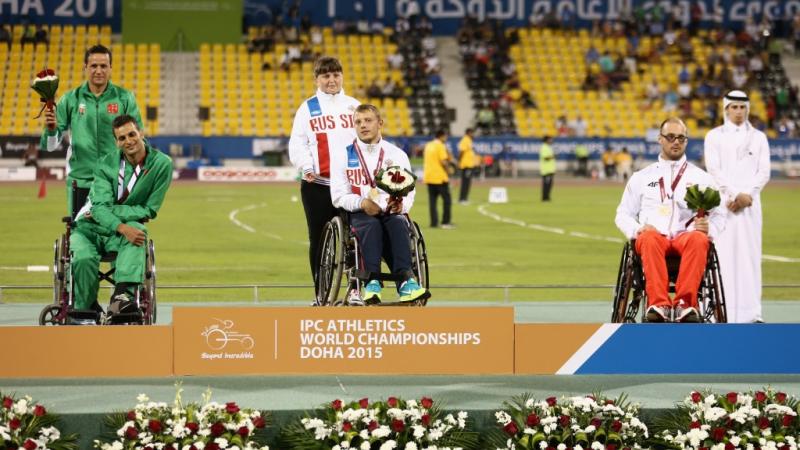