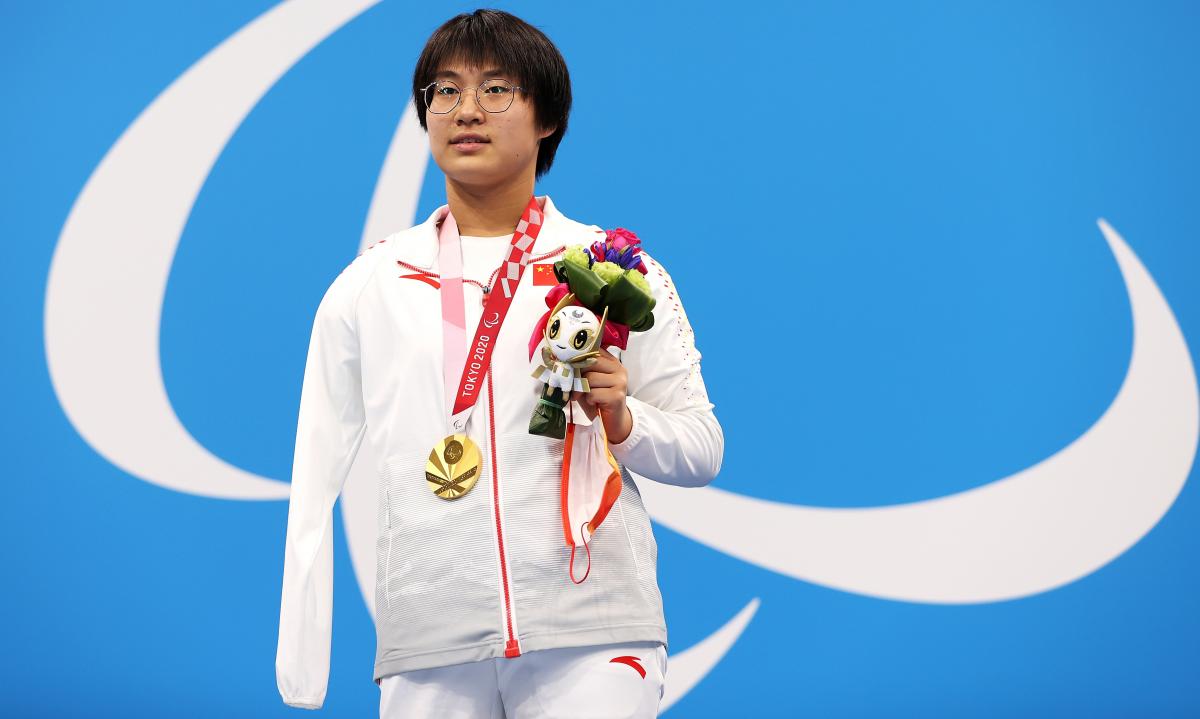 China stayed on course to top the medal tally at the Tokyo Aquatics Centre with four days remaining in the Para swimming competition at the Tokyo 2020 Paralympic Games.

The Chinese team picked up another five golds on Monday (30 August), a third of the titles on offer on day six.

Jiang Yuyan, the youngest athlete in the Chinese contingent competing in Tokyo, was first in the women’s 50m butterfly S6. The 16-year-old also set a world record (34.56) in the heats.

“My family watched the race on television at home. I haven’t had time to look at my phone yet, but I think there are a lot of messages there.”

“My family watched the race on television at home. I haven’t had time to look at my phone yet, but I think there are a lot of messages there.” 😉#ParaSwimming #Paralympics #Tokyo2020 @Paralympics @Tokyo2020 pic.twitter.com/cKPVRkbDqa

That result was Zheng Tao’s third gold medal of the Tokyo 2020 Paralympic Games, and the second time he topped the podium with a world record (31.42) to his name. He shared the medals with teammates Ruan Jingsong (silver) and Wang Lichao (bronze).

Wang Jingang was another Chinese swimmer picking up a first gold of the Games. He won the men’s 50m butterfly S6. It was also the first time the 30-year-old topped the podium in his third Paralympics.

China tops the medal tally with 13 gold, and look set to follow the last two Games, when they were also the top performers in the pool.

“China’s para athletes are very bold, they dare to go out there and fight for it. Also, in our team we have very specific training programmes for everyone, no matter which class you are in. It’s very targeted and that’s very important," said Wang Jingang.

Dong Lu won her third gold of the Games in the women's 50m backstroke S5 with a new world record (37.18). Natalia Ziani of Ukraine held the previous world record since 2010.

The last gold medal for China on Monday came in the women's 200m individual medley SM11. Jia Ma took the win with a new world record (2:42.14) in front of her compatriot Liwen Cai.

Meanwhile, Ihar Boki from Belarus continued his flawless outing in Tokyo as he won a fifth gold medal. The 27-year-old can make it six out of six when he competes in his final event, the 100m breaststroke, on Wednesday (1 September).

RPC's Bogdan Mozgovoi broke the Paralympic record (1:01.65) and took the gold medal in the men's 100m backstroke S9. It was his first ever Paralympic accolade.

More world records were broken in the men's competition. Ukraine's Andrii Trusov won the 100m backstroke S7 with a time of 1:08.14, while Israel's Ami Omer Dadaon trumphed in the 200m freestyle S4 with a 2:44.84-mark.

Dutch Para swimmer Rogier Dorsman won the 200m individual medley SM11 gold, also with a new world record (2:19.02). It was his second gold medal in Tokyo after the triumph in the men's 400m freestyle S11.

"This [gold] medal is one I won by swimming a world record and the other one isn't. So maybe this one is a bit nicer [than the other]. Overall I'm super happy to have taken yet another gold medal."

Two golds for USA and Italy

We're not crying, you're crying 🥲

"I can't see the scoreboard, but the lights on the blocks light up and all I was looking for was a red light. I knew if I got a red light on my block it would be a medal. I saw that and was just like 'oh thank God!'"

Australia won the men’s 4x100m freestyle relay 34 points with a new world record (3:44.31), while Italy and Ukraine came in second and third respectively.

Day seven at the Tokyo Aquatics Centre will host 14 finals. Complete schedule and results from the Tokyo 2020 Games are available on Paralympic.org.