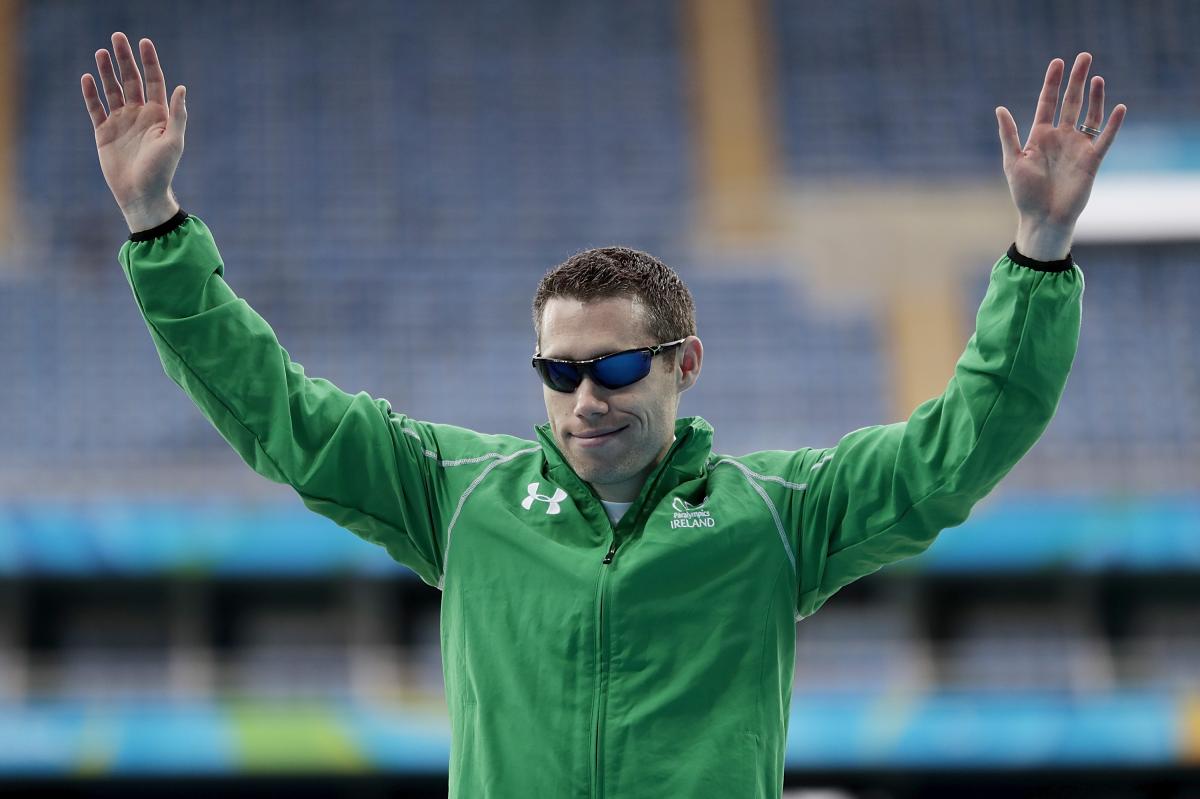 Jason Smyth visited Dublin 2018 ahead of competing at Berlin 2018

“You don’t get the chance to compete in front of the home crowd in a major event very often. Maybe, never. It is very important for Ireland to host a Para sport European Championships. It’s been very well organised.”

Five-time Paralympic champion sprinter Jason Smyth came by to show his support to the Irish swimmers before his trip to Berlin for the World Para Athletics Euros, which stars on Monday (20 August).

“You don’t get the chance to compete in front of the home crowd in a major event very often. Maybe, never. It is very important for Ireland to host a Para sport European Championships. It’s been very well organised,” said the 31-year-old.

The impact of hosting

In a career spanning more than a decade, Smyth has witnessed the impact of Para sport events in other countries and expects the same to happen in Ireland after the Europeans.

“It doesn’t happen overnight. Events like this attract the average person, connect people and are a stepping stone. The more people know about the movement the better. We’ve seen that after London 2012 [Paralympics].”

For the sprinter the home crowd support can make a difference for the Irish athletes who are still after the first medal at Dublin 2018.

“It’s great to have so much Irish support. The crowd can definitely help you to up your performance. If you get a medal, you can build the momentum. We’re athletes and getting medals is what we live for,” Smyth said.

Meanwhile, he will head to Berlin as the favourite in the 100m and 200m T13. He remains unbeaten in his class since the 2005 Europeans in Espoo, Finland.

“That shows how long I’ve been around. But I’ll still be around as long as I’m competitive. The preparations have gone very well and I’ve just run my best time of the year this week.”

Smyth’s main rival in Berlin will come from Poland. Mateusz Michalski took silver in the men’s 100m T13 at last year’s World Championships in London. The Irish runner hopes the final result will be the same in Germany.

“He is my main rival and a fast guy. It is a major event and we wall want to take medals for our countries,” said Smyth. “I’m feeling good and I want to keep my unbeaten record in Berlin.”

The National Aquatic Centre has also hosted some very fast performances in the 50-meter pool over the week. Could Smyth be as quick in the water as he is on the track?

“I don’t even know the last time I competed in a swimming pool. I don’t think I would have a chance,” Smyth said.

Athletics
Berlin 2018: Challenge of the champions