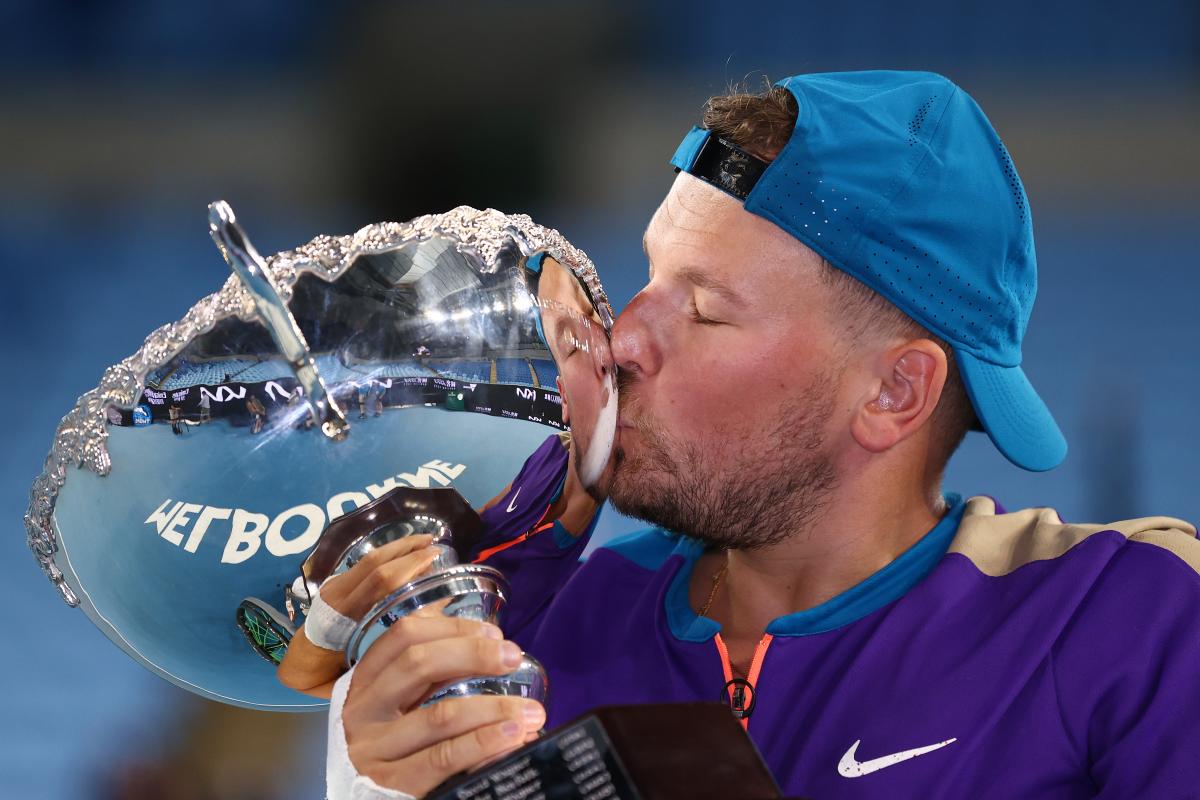 World No. 1 Dylan Alcott delivered an outstanding performance to beat Dutchman Sam Schroder 6-1, 6-0 to win the quad singles final and his seventh Australian Open title in Melbourne, on Wednesday.

Schroder came into the match with memories of his stunning US Open triumph on debut against Alcott in September, but there would be no repeat of the New York result here.

The 30-year-old, playing at home, was in total control of the proceeding from the start and did not allow Schroder to settle. Once Alcott had the edge, he just kept gaining in confidence and remained at his dominant best till the end.

"Look, I was in a bit of a mood when I got out there," Alcott said. "My real purpose in life is not winning Grand Slams. It's actually changing the perception of people with disabilities so they can get out there and live the lives they want to live," he said.

"One thing that inspires me is broadcast and all this kind of stuff. Because it went so late and we got a court change, I was a bit flat."

"Then I realised at 1-Love, I was like, stop being a sook. Let's play tennis. Not everyone is getting to their jobs at the moment, and I do. I had an opportunity to win a Grand Slam."

Alcott made it two out of two as he also secured the doubles title together with compatriot Heath Davidson following a 6-2, 3-6, 10-7 win over Great Britain’s Andy Lapthorne and USA’s David Wagner.

"I think what really, if you take money out of sport, what's the biggest prize in sport? To me, it's the Paralympic and Olympic Games," Alcott continued. "[I've] always been for a Paralympic athlete because we weren't always at the Grand Slams, obviously don't get paid the USD 4 million or whatever it is to win and stuff like that.

"Once every four years people with disability are the stars. People say, 'why not have the Paralympics and Olympics combined?' I'm like, 'when Usain Bolt was running, I fully appreciate everyone will watch him and not me. But guess what? When I'm on, we're the stars, right?'"

“It’s maybe like a mini Nadal-Federer, a tiny version,” Dutch world No. 1 Diede De Groot said of her rivalry with Japanese Yui Kamiji after sealing her third Australian Open women’s singles title by the tightest of margins: 6-3, 6-7(4), 7-6(4).

This was the 34th showdown and third in the title match at Melbourne Park between the pair, who have won 14 of the last 15 Grand Slam singles crowns – though the 2021 edition was a far cry from the 2019 clash dominated by the Dutch world No. 1 for the loss of just two games.

Kamiji, the 2020 champion, recovered from a set down and fended off a second-set fightback from 5-3 up to reach a final-set tiebreak that delivered its own drama as De Groot, forgetting she needed to win 10 points and not seven, had to regroup after celebrating her victory early.

“I don't think anyone out there – not my opponent, not the people watching, nobody at home, not myself – knew that it was a 10-point tiebreak,” said De Groot. “I really had to refocus and go back and think to myself I can do it to 7-4, I can do it to 10. I just had to be tough, I guess – I managed to do it.”

The Belgian has at last a Grand Slam men’s singles title to his name.

Five years after his first Major final appearance, and five months on from his heart-breaking loss in Paris, the 32-year-old became his country’s first wheelchair tennis Grand Slam champion on a day of high drama at the Australian Open.

Gerard avenged last year’s Roland Garros final defeat by Alfie Hewett with a 6-0, 4-6, 6-4 victory in Melbourne, a score line that tells only half the story of a contest that began with a 10-game surge and ended on a seventh match point, sparking an outpouring of raw emotions from the champion.

“I’m so happy,” said Gerard. “I waited for it for so many years, so much work at home with my coaches, with my physio, with my trainer, with everyone who is around me. It means a lot, so much to me. I just wanted to let everything out. There’s really so much work behind it that I had to show with my roar – not only one, but two I think I did. It was happiness when it went out.”

In a repeat of last year’s men’s doubles final, Brits Hewett and Gordon Reid once again edged a tight encounter over France’s No. 2 seeds Stephane Houdet and Nicolas Peifer 7-5, 7-6 (3) to claim their fourth successive Grand Slam doubles crown, having swept the three majors played in 2020.