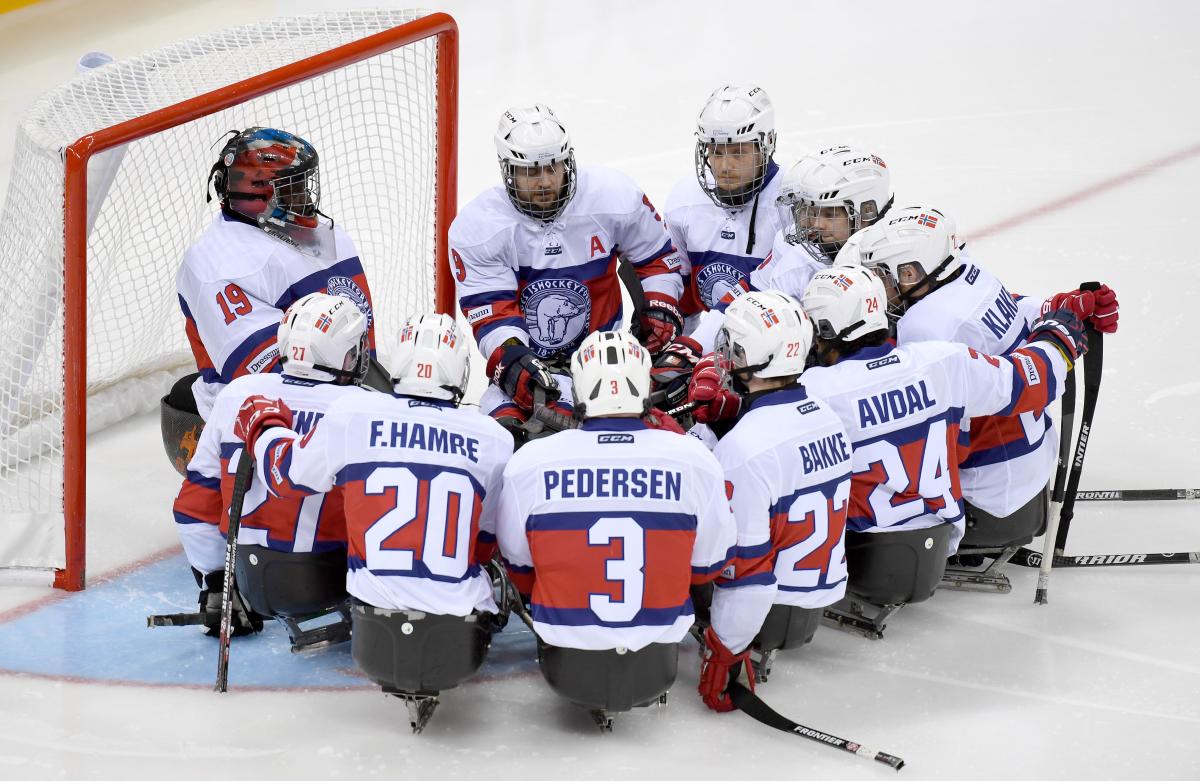 Two-time Paralympian Audun Bakke smacked the puck to the top right corner of the net with 33 seconds remaining in overtime to give Norway a thrilling 2-1 victory over Germany and cap off the second day (13 April) of action at the 2017 World Para Ice Hockey Championships A-Pool in Gangneung, South Korea.

The 28-year-old from Oslo lifted the team on his shoulders the entire game, scoring both of Norway’s goals so his team could earn two points in the tournament standings.

“It was a very tough and physical game from the start, and after it was tied 1-1 the pressure got even higher, but I kept trying to keep the pressure off and was finally able to put it in the net when it came to overtime,” Bakke said.

It was Bakke who opened the game’s scoring 12:03 into the first period, taking it to the net off a pass by two-time Paralympic medallist Morten Vaernes.

Germany’s double-amputee Bernhard Hering leveled the score 5:45 into the second stanza with a fancy swipe of the puck from beyond the crease. Neither team scored after that for the remainder of the third period, which left Bakke to be the hero in the five-minute overtime.

“It was a great start to the tournament today. It was a lot of fun out there and we got the job done,” Roybal said. “It’s always great to play with (Farmer), as he’s probably the best player in the world. It’s awesome to have him out there on my line and it’s always a lot of fun.”

The win was the first for USA’s new head coach Guy Gosselin, a two-time US Olympian who was making his international head coaching debut after the passing of former head coach Jeff Sauer in February. A tribute video to Sauer was aired just prior to puck drop.

Alternate captain Nikko Landeros struck first for the USA, tossing the puck into the net and giving his team the early 1-0 advantage. Later in the first, Farmer fed the puck to Roybal for a score and then vice versa to put their team up by three.

The USA extended its lead in the second period when Paul Schaus deflected a shot from defender Josh Pauls into the net. In the final frame, Farmer fired the puck between the posts twice to complete his hat trick and Rico Roman capped off the USA’s scoring with 2:12 remaining.

Steve Cash and Bo Reichenbach split the goaltending duties and shutout effort for the USA, while Ulf Nilsson stopped the puck 40 times for Sweden.

Canada picked up right where it left off on day one, charging to a 7-0 victory over Italy, as Billy Bridges, Liam Hickey and Greg Westlake all stacked the scoreboard with two goals each. The reigning silver medallists have now outscored their opponents 16-0 in their first two games.

"It's huge for us as a team, getting two big wins,” said Hickey who competed in wheelchair basketball at the Rio 2016 Paralympics and is now skating in his first World Para Ice Hockey Championships.

“We wanted to come out strong and that's what we've done so far. It's been good for me because I'm getting comfortable now with this big of a stage. Now, it's time to move on for tomorrow's game against Sweden so that we'll be ready to go."

Bridges found the net first against Italy off a pass from Hickey just 2:17 into the contest. Two minutes later, Westlake doubled Canada’s lead before Corbyn Smith and Hickey padded it with scores of their own to close out the opening period with a 4-0 lead.

Italy brought in goalkeeper Gabriele Araudo in the second period to replace Santino Stillitano, and he stopped all seven shots that came his way over the first 15 minutes.

But in the third period, Bridges, Hickey and Westlake all crashed the net successfully to extend Canada’s lead to seven and secure the team’s second consecutive shutout.