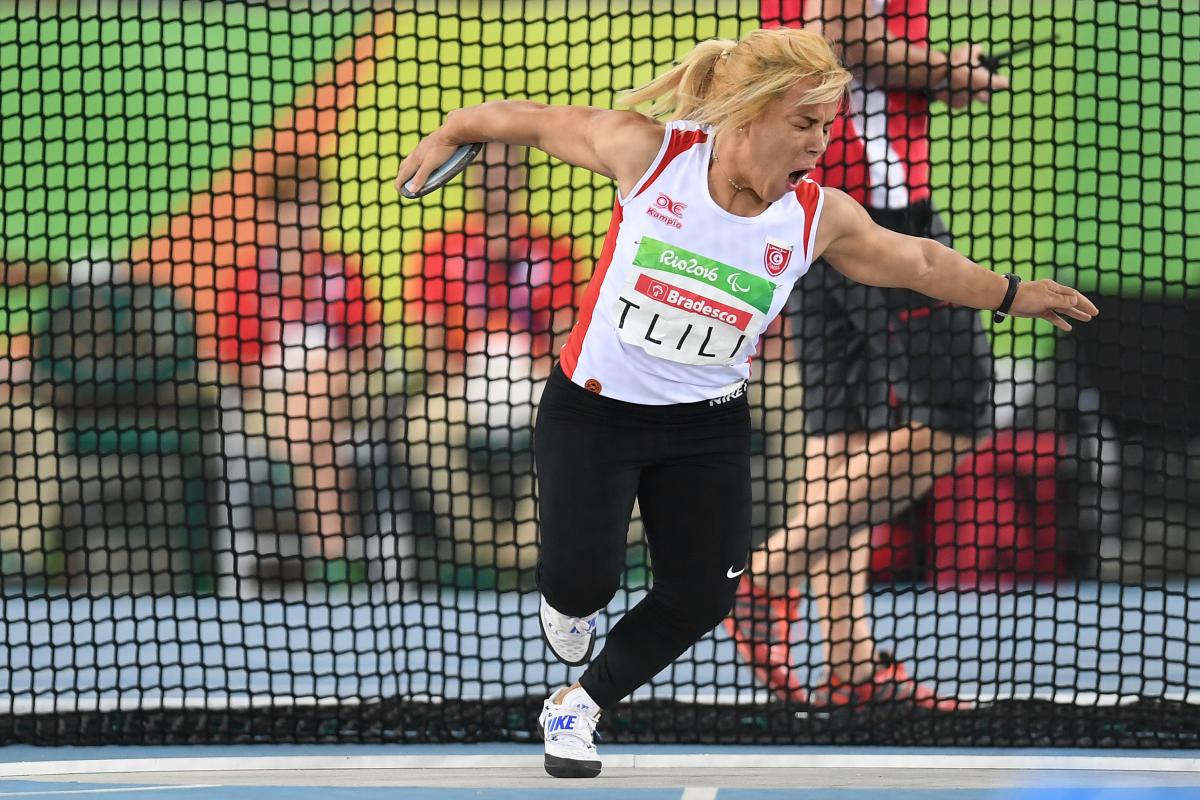 Tunisia's Raoua Tlili in action in the women's discus F41 at Rio 2016.

Gharbi, 27, who claimed his first global titles last year, winning both the 200m and 400m T54 at London 2017, defeated Marcl Hug for the third time in two days.

Gharbi’s teammate Raoua Tlili added to Tunisian celebrations as she claimed gold in the javelin F37/40/41 to add to the discus title she won 24 hours earlier.

The multiple world and Paralympic champion, who competes in the F41 class, managed 25.13m in the second round, dominating the field once again.

It was two wins in two days for India’s world javelin F46 champion Sundar Singh Gurjar (40.18m) as well – he took gold in the discus F46.

Gurjar’s teammate Neeraj Yadav – winner of the shot put F55 on Tuesday – came out on top in the discus F55 thanks to his final round throw of 33.69m, while Iran’s Paralympic silver medallist Hamed Amiri also completed a discus and shot put double, launching the discus 29.76m with his final throw of the day to win the F54 event.

Iraq’s F40 thrower Ahmed Naas went one better than his silver medal on Tuesday with gold in the javelin F40/41/42/64. The 26-year-old, who won Paralympic silver back in 2012, failed to register a mark with his first two throws but from then on improved each round, culminating with a final round 36.89m.

Germany’s Paralympic shot put F33 champion Daniel Scheil (22.36m) was the clear winner in the javelin F33/34 – albeit more than five metres short of his world record set in 2015.

Algeria’s Paralympic bronze medallist Nadia Medjmedj (20.20m) had to settle for second place in the women’s javelin F55/56/57 after leading until the final round, when Germany’s former Paralympic and world champion Martina Willing unleashed a massive 20.28m throw to steal the top spot.

Marian Kureja’s winning throw of 31.00m in the men’s club throw F51 would have secured him silver at last year’s World Championships – he finished fourth in London. In this form the Slovakian, who won bronze at Rio 2016, could be a real contender for gold at August’s European Championships.

The 400m was the sole event out on the track on the second day of competition at the Dubai Club for the Disabled.

Swiss wheelchair racer Bojan Mitic (57.37) claimed his first victory in Dubai with a win in the 400m T33/34 – Tunisia’s 12-time world champion Walid Ktila - victorious over 200m and 800m on Tuesday - was disqualified after a false start.