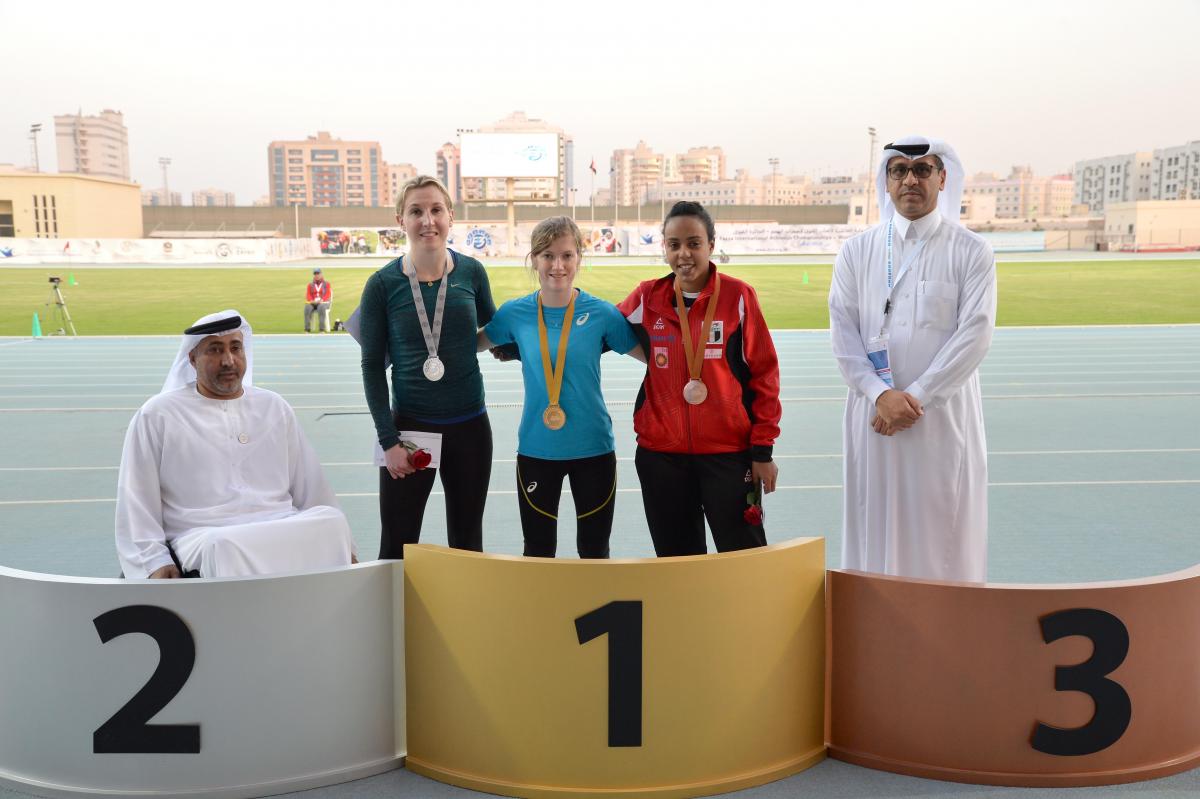 There was a new world record in the women’s discus F45 too, as Khazakstan’s Irina Tychshenko threw a massive 20.09m.

The 21-year-old, who won over 60m indoors in Glasgow, Great Britain, last month, clocked 26.96 as she finished ahead of teammate and T37 Paralympic and world champion Georgie Hermitage (28.41).

Hahn heads to Australia’s Gold Coast next month, aiming to add the Commonwealth title to her already extensive medal collection.

Tunisia’s multiple Paralympic champion Raoua Tlili remains the one to beat in the women’s discus F41. The six-time world champion managed a best of 32.06m, just 23cm shy of her winning throw at London 2017.

Back on the track and results also went to form in the men’s 200m T33/51/52 as Kuwait’s Paralympic and world gold medallist Ahmad Almutairi (31.04) finished nearly two seconds clear of the field.

A strong field lined up in the men’s 200m T37, and it was Saudi Arabia’s 17-year-old Ali Alnakhli who took the win, crossing the line in 24.79, with Egypt’s Paralympic silver medallist Mostafa Mohamed (24.89) 0.1 seconds behind.

There was a win too for Greece’s T62 sprinter Stylianos Malakopoulos (26.41) while Briton Jordan Howe (27.00) was the first T35 Para athlete over the line and Malaysia’s 100m T36 Paralympic champion Mohamad Mohamad Puzi clocked 29.49.

Back to the field and Algeria’s Asmahane Boudjadar, who set a new javelin F33 world record in Dubai twelve months ago. She couldn’t improve on that mark this time, but still took gold in the javelin F33/34 with a best of 11.63m.

Former Paralympic and world champion Stephen Miller showed he’s still got what it takes with a win in the men’s club throw F32. The Briton recorded a third-round throw of 30.11m – further than his world bronze medal-winning throw in London last year.

The men’s shot put F11/12 was won by Iranian Mahdi Olad. The 31-year-old set a new Asian record of 12.82m with his second attempt of the day and finished more than three metres clear of his rivals.

India’s Sundar Singh Gurjar claimed his first world title in the javelin F46 last year and he underlined why he remains the man to beat with a massive 59.98m throw to take the win.

Full results can be found here with competition continuing daily until Friday (16 March).

Athletics
Walid Ktila in the best form of his life