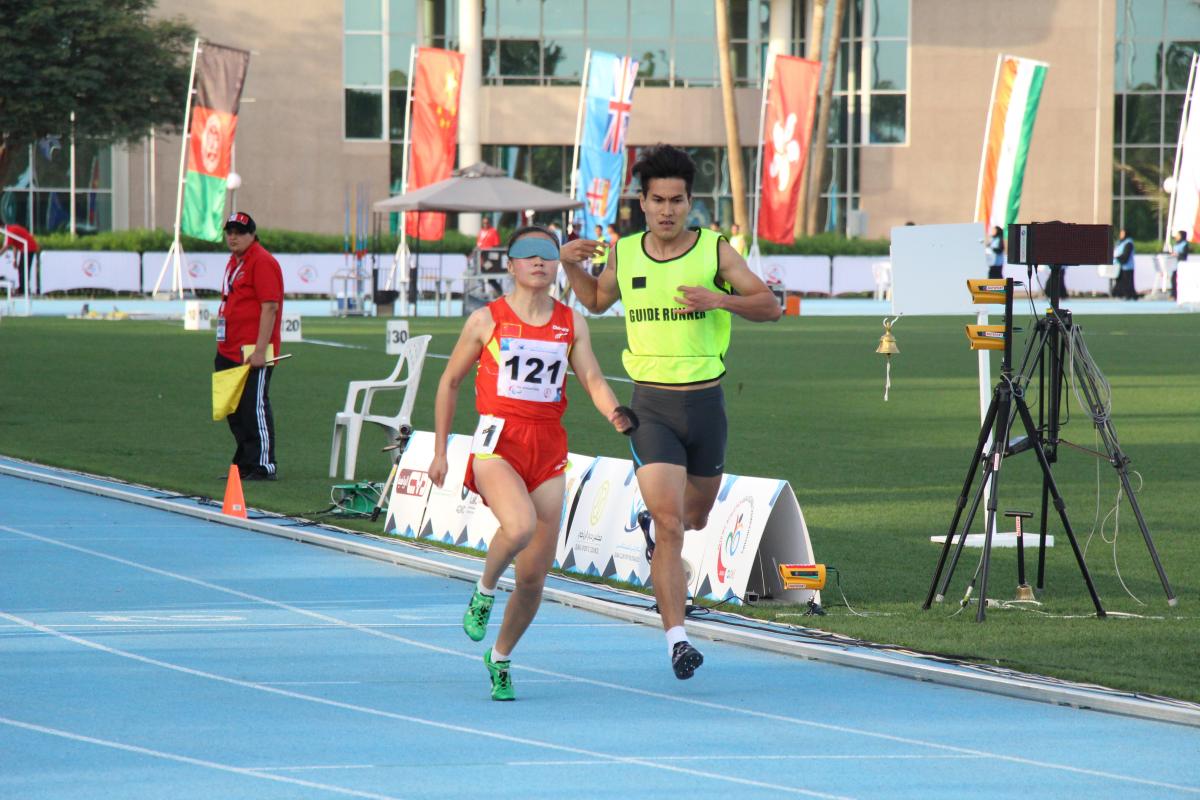 “I will present this medal to my family and I promise that I will be a Paralympic champion in the future."

That success meant China move up to second on the medals table behind Iran, who notched up a further five titles on the fourth day of competition.

Paralympic bronze medallist Juntingxian Jia kicked off China’s gold medal rush as she held off her teammate Yan Chen to win the 100m T11 in 12.54.

“I feel really good. Our goal is the Paralympic Games, and I am quite confident that we will do even better than in 2012,” said Jia, who won 200m T11 bronze at London 2012 four years ago.

Zhu, who won 200m T12 bronze at London 2012, recently returned to the track after the birth of her daughter and knows that she is capable of going even faster.

“I’ve just returned to training after giving birth and I’m not physically fit at the moment - my guide runner and I only started training two months ago,” she explained.

“I plan to get fitter with training after these Championships and I hope to have a breakthrough in my performance. I’m loving the challenge even more.”

China secured two victories in the field too.

Paralympic and world champion Liangmin Zhang (F11) took gold in the women’s discus F11/12. Her second round best of 36.88m was enough to take the win – although she knows she is capable of more.

“I’m not happy with how things went today, but it was an important part of my preparations towards Rio this year,” Zhang said. “We are in the middle of winter training right now so I am not quite ready. I know I can throw a lot further than this.”

The UAE’s Salem Alshehhi clinched double sprint gold at Dubai 2016 adding a convincing win in the 200m T54 to his 100m victory from Tuesday, as he stopped the clock at 27.06 - his compatriot Rashed Aldhaheri and Japan’s Yuki Nishi had to make do with silver and bronze respectively once again.

She had to work hard to earn it, racing neck and neck with Chinese Taipei’s Yu-Lien Chen before finally pulling clear just before the line.

It was double gold for Iran’s Ahmad Ojaghlou who quickly took control of the 100m T47, powering home in 11.09 – just 0.04 seconds outside of the Asian record.

Local star Mohamed Hammadi made it a golden hat trick in Dubai as he cruised to a comfortable win in the men’s 400m T34, finishing in 54.76.

Iraq’s Abbas Al-Darraji maintained his early lead in the men’s 400m T36/38, racing clear on the back straight and maintaining a significant lead right to the line in 53.87.

Saudi Arabia’s Saud Alwani was rewarded for his terrific late charge in the men’s 400m T37, catching Thailand’s Sakphet Saewang down the home straight and throwing himself at the line to take the gold in 1:01.10.

“I will present this medal to my family and I promise that I will be a Paralympic champion in the future. I have only been racing less than one year,” said the 18-year-old.

Kuwait’s Hamad Aladwani came through in the closing stages to take gold in the men’s 200m T53. The former 400m T53 Paralympic champion clocked 28.09 to take the title ahead of Saudia Arabia’s Fahad Alganaidl.

Iran picked up three medals in the field on Thursday - Mehdi Alizadeh (F33) came from behind to win the men’s shot put F32/33 as early leader Hani Alnakhli (F33) had to settle for second place.

Alnakhli led right up until the sixth and final round when Alizadeh threw a massive 8.95m – adding 10 centimetres on to his rival’s best mark.

Nour Mhammad Arekhi helped cement his country’s place at the top of the leader board, winning gold in the men’s shot put F11/12 in convincing style with a best of 11.50m (838 points).

Vietnam’s Ngoc Hung Cao improved on his discus silver medal from Tuesday to take gold in the javelin F57, thanks to a second throw of 41.64m.

Indonesia’s Priyano Priyano won the men’s discus F46 with a fifth round effort of 42.39m – just 44 centimetres clear of the rest of the field, while Pakistan picked up their first gold medal of the Championships thanks to a winning leap of 6.25m (983 points) by Haider Ali (T37) in the men’s long jump T36-38.

Results are available at IPC Ahletic's website alongside live coverage.